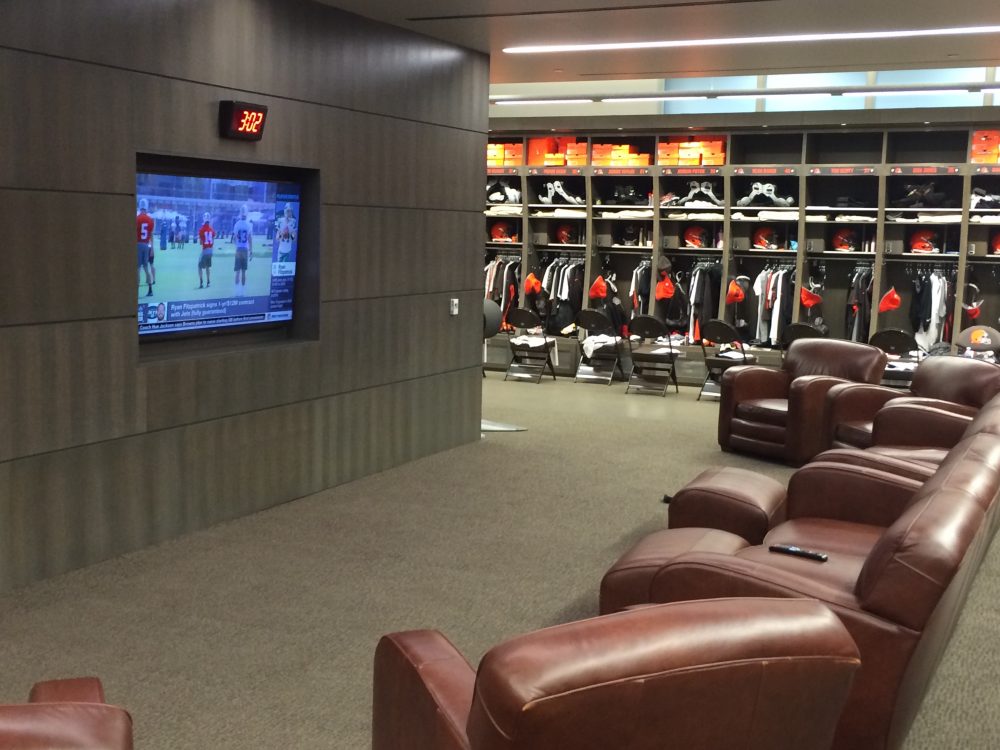 BEREA — The Browns team headquarters has never looked better (or been bigger) than it is now.
Franchise officials unveiled their massive offseason renovations Thursday, which include a new 5,000-square foot natatorium and a 3,500-square foot training center. More than 100,000 man hours were required to complete the $15 million project in time for training camp.
“It’s been really cool to see this huge transformation of a full-sized commercial building,” Cleveland linebacker Paul Kruger said. “It’s a beautiful thing, the resources that we now have to recover and train in.
“If you utilize these resources to their fullest extent — both for football and life responsibilities — you have no excuses not to be at your best.”
An expanded locker room and new players’ lounge also are among the most striking changes to the facility that sits on Lou Groza Boulevard.
More than 25,000 square feet were added to the building’s footprint — with many floor-to-ceiling windows facing the practice fields — in order to return it to state-of-the-art status.
“It definitely expands our options on many levels,” said Joe Sheehan, who has been the Browns’ head trainer since 2009. “I can tell you there aren’t many teams with these capabilities or these facilities.
“I haven’t been to the Cowboys’ new building yet, but to my knowledge, there is no place in the NFL quite like this.”
The natatorium features a two-lane, 25-yard lap pool and three smaller tubs for rehabilitation. It sits directly behind the end zone of the main practice field, which was shifted south to accommodate the expansion.
Between the locker room and natatorium is the training center, which now resembles a mini-medical center. Physicians’ offices, a phlebotomy room, an X-ray facility and nearly a dozen massage tables flank Sheehan’s work space.
“Everything you see just adds to the statement of belief and hope that the Haslams are giving us,” Kruger said, referring to owners Jimmy and Dee Haslam. “I believe it’s going to help us get to the next level and help us progress as a team.”
Go, Joe
Cornerback Joe Haden is the only Browns player among the top 50 merchandise movers in the league, according to the NFL Players Association.
Haden ranked No. 42 in nationwide jersey and souvenir sales from
March 1-May 31, which was second at his position behind Seattle’s Richard Sherman, who was No. 17.
Cowboys wide receiver Dez Bryant topped the list, while Dallas quarterback Tony Romo and Cowboys running back Ezekiel Elliott were next in line. Steelers wide receiver Antonio Brown was the best seller in the AFC North Division at No. 19.
l Haden (left ankle surgery) is listed as active/physically unable to perform, but passed the mandatory conditioning test with ease. Players had to complete 10 sprints of either 20 or 40 yards — depending on their position — in a specified time period.
“Joe is chomping at the bit, so we’ve had to kind of put our arms around him and slow him down a little bit,” Cleveland coach Hue Jackson said. “He’s done an outstanding job of getting himself healthy. I think we have a little ways to go, but I think he’s very close.”
Bryant and Bryant
Browns head of football operations Sashi Brown says he has no plans to release outside linebacker Armonty Bryant, who pleaded guilty to attempted drug possession Wednesday.
Bryant has already earned a four-game NFL suspension after testing positive for a performance-enhancing substance. He is likely to receive an additional penalty as a result of the first-degree misdemeanor.
“I don’t know what to expect with Armonty,” Brown said. “The league is going to review it. We will be in touch with them when they engage.”
Defensive end Desmond Bryant (pectoral surgery) was placed on the season-ending reserve/non-football injury list. He posted a career-high six quarterback sacks for Cleveland in 2015, but tore a pectoral muscle while lifting weights in early July.
Tight end Ryan Reeves, an undrafted rookie from Duke, was signed to fill Bryant’s spot on the 90-man roster.
Familiar faces
Former Bengals wide receiver Chad Johnson and longtime Browns running back Earnest Byner will serve as coaching assistants at training camp.
Byner instructed Cleveland’s players during offseason team activities in Berea, which earned him a return invitation.
“We’re looking forward to working with Earnest, and I know the players are too, so that will be fun,” Jackson said.
Johnson has no coaching experience at any level, but is eager to pursue a career in the field. Jackson was his position coach and off-the-field mentor in Cincinnati.
“Chad wants to learn, and what better place to learn than from (senior offensive assistant) Al Saunders, who is the best in the business,” Jackson said.
Opening day
Training camp officially begins today with a practice from 3-5:30 p.m. No tickets will be available at the gate this weekend, but free admission is still available for the Browns’ fourth public workout Monday.
NFL teams are not permitted to practice in pads until their third camp session, which Jackson is especially eager for.
“Absolutely, Sunday we will be in pads,” Jackson said with a smile. “I promise you. It will be fun. That’s the only way you get to play football.”
Quote of the day
“There is no magical way of predicting what our record is going to be. But at the end of the day, I know this: We’re going to win and we’re going to expect to win.” — Jackson
Contact Brian Dulik at [email protected] Follow him @BrianDulik on Twitter.