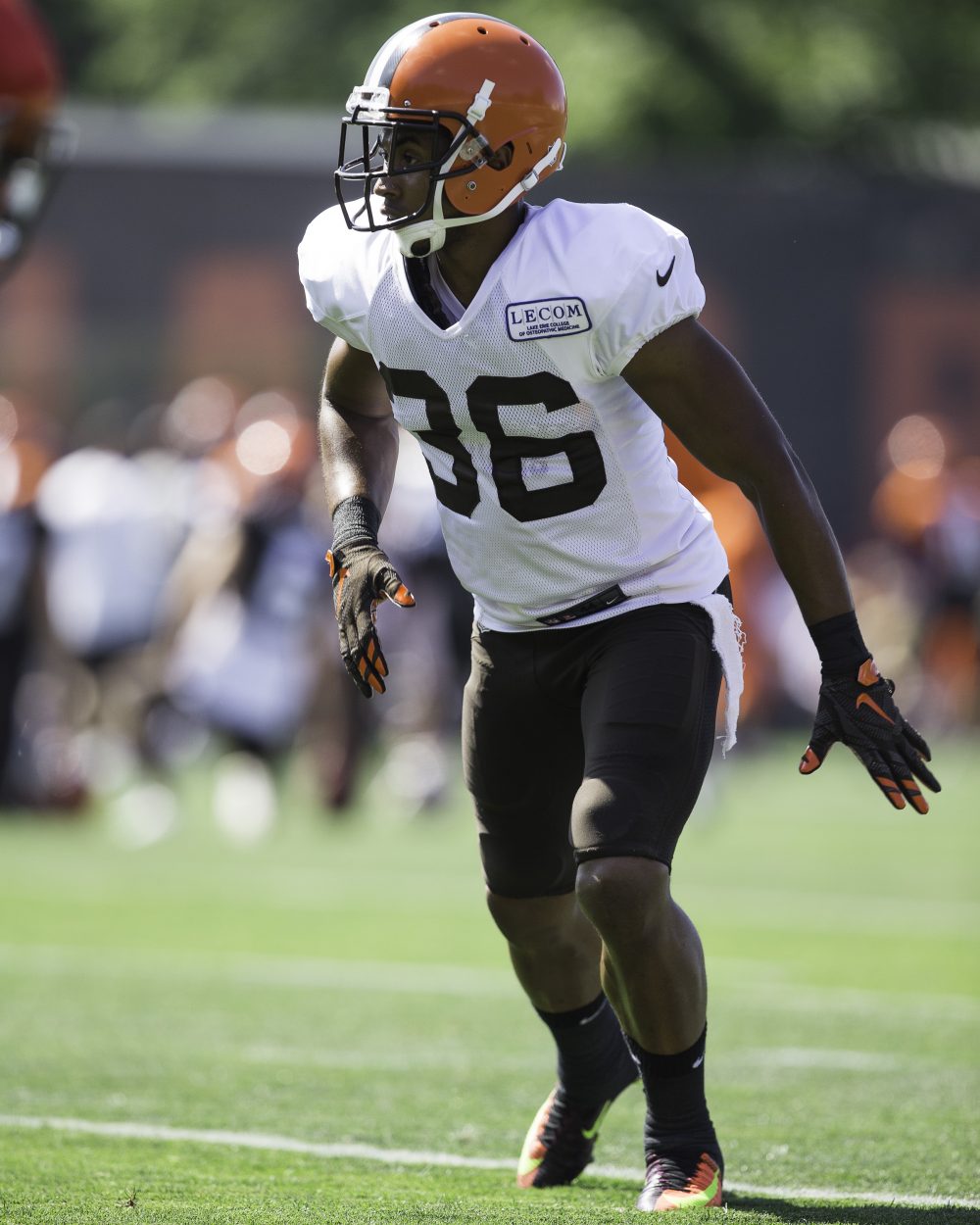 BEREA — The battle at nickelback has become one to watch.
K’Waun Williams is the incumbent after holding the job for his first two seasons. Jamar Taylor is the challenger after being acquired from Miami in a draft-weekend trade.
Both have made plays in the first four days of training camp, with Taylor having the edge in playing time with the first-team defense.
“We have a couple of capable guys there,” coach Hue Jackson said Monday after practice. “K’Waun has played. We kind of know who he is. Jamar is new. That’s just the way it is.”
Williams, who was undrafted, was a favorite of the previous coaching staff. He started 10 of 26 games, totaling 52 tackles, eight passes defensed, three forced fumbles, a fumble recovery and two sacks.
“It’s a new staff. I feel like everybody needs to prove themselves,” he said. “I’m just competing and showing what I’ve got.”
Taylor was added by the new regime. He was a second-round pick of the Dolphins in 2013 but didn’t live up to the draft position. He started nine games in three years with 78 tackles, no interceptions and four pass breakups.
“He’s very talented,” Jackson said. “Sometimes guys get drafted in places and maybe the environment is just not right for them. He’s getting another opportunity, and I think he’s let the past go and he’s walked in here and said, ‘Hey, I want a job.’
“He’s competing every day. He’s tenacious. He’s tough. He’s quick. He’s sudden. He’s fast. We have another good player to put back there in the mix for our football team.”
Taylor and Williams are also getting reps at the outside corner spots. That’s new for Williams, while the shift to the slot is new for Taylor.
“When I got here they just told me I was smart, I moved good,” Taylor said. “I’ve been picking it up pretty well. The things I’ve been making mistakes on, I just try not to do it more than once.”
Taylor knows beating out Williams won’t be easy.
“He’s a great player,” Taylor said. “KK is definitely a solid nickel.
“Competition is great. Learn from him, he learns from me, but at the end of the day I want to be on the field.”
GONE GUY
Chad Johnson’s first stint as a coaching intern was short-lived. It remains to be seen if there’ll be a second stint.
“Chad came as a guest of mine,” Jackson said. “I wanted him to see what this was going to be like. I knew at some point in time Chad needed to go do what Chad needed to do.”
Johnson, who was a star Bengals receiver when Jackson was an assistant coach, helped out for a couple of days but wasn’t at practice Sunday or Monday.
“His time here was very beneficial because guys were able to ask him questions about playing in the National Football League,” Jackson said. “What were the characteristics the great players carry and what they’re like, and I think guys asked him those questions.
“It was good for me to have him around. Chad is very close to me, but at the same time, I think he found out this business is rough. There’s a lot of hours that we keep and I don’t think Chad’s used to that.”
After Jackson’s news conference, Johnson told Cleveland.com by phone he left to take care of family business, wants to return and doesn’t plan to leave. He tweeted Saturday “These are the best 14 hour work days ever!!”
Jackson didn’t rule out the possibility of a return.
“There were some things he needed to do,” Jackson said. “I told him, ‘Go do what you need to do.’ He has some kids and he has some other things that he needs to take care of, so I wanted to make sure he had an opportunity to do that.
“I’m not going to say he’s done. He can possibly come back from time to time, but I know that he’s not here right now and he let me know that he wouldn’t be here, so that’s not an issue at all.”
CATCHING UP
Rookie receiver Jordan Payton, a fifth-round pick, is trying to make up for lost time. He missed the offseason program because school was still in session at UCLA and NFL rules forbid a player from leaving school to join his team.
“It’s a process. I definitely just jumped in and started to pick up things with everybody else,” he said. “Credit to the coaches and to the vet guys and to the other rookies really helping me out and getting along. It’s what training camp’s for, but I’m getting there for sure.”
Payton, who caught a quick hitch from Austin Davis in the tackling period and made linebacker Cam Johnson miss for a nice gain, said he did all he could to not fall too far behind during the spring.
“I was lucky enough, they gave me a Surface with the playbook and every day you could watch what they’re doing, stay up-to-date,” he said. “Obviously it’s not the real thing but it’s better than nothing for sure.”
“He’s working at it,” Jackson said. “We’ll see where he is when the time comes.”
GO TIME
Defensive end John Hughes is in his fifth season with the Browns but has started only 10 games. The former third-round pick is penciled in as the starter and said he’s ready.
“Yeah, most definitely,” he said. “I waited my turn for a long time, played behind a lot of great D-linemen and learned a lot, so I think it’s my time.”
Hughes was expected to start before a torn pectoral sidelined end Desmond Bryant for the year. But Hughes will need to raise his level of play even further given the loss of perhaps the team’s best lineman.
INJURY REPORT
The injury list grew to eight.

Defensive lineman Dylan Wynn (ankle) was waived/injured after getting hurt Sunday.
Tight end Randall Telfer, who missed his rookie season in 2015 with a foot injury, dropped two passes early but rebounded with a nice catch on a back-shoulder fade from Robert Griffin III.
During special teams drills, Kruger and inside linebacker Demario Davis worked on hand-fighting with strength and conditioning assistant/skills development Joe Kim, a martial arts expert.