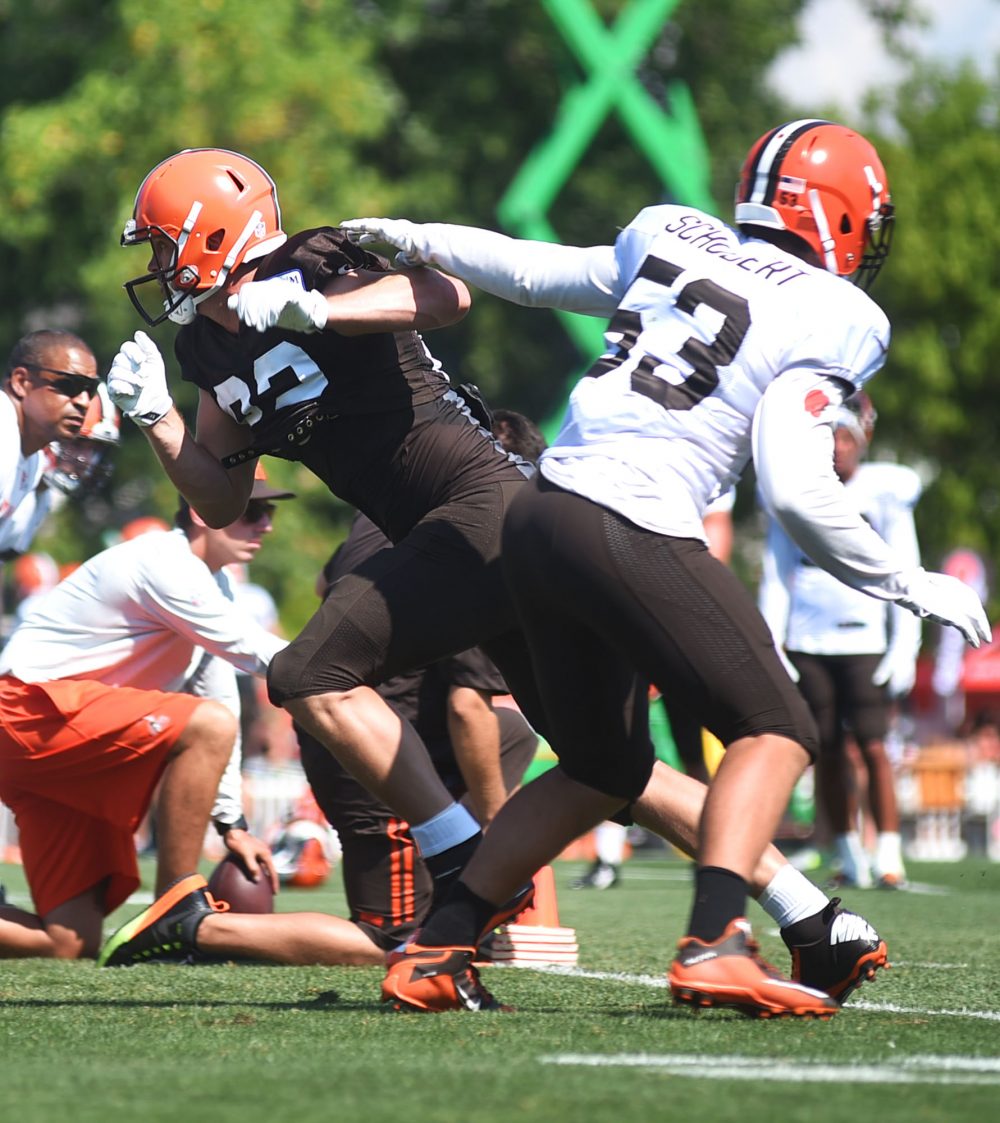 BEREA — Browns tight ends coach Greg Seamon was a fan of Gary Barnidge from afar. Now that he works with the Pro Bowl selection every day, he likes him even more.
“I’m fortunate because I’ve got good guys in my room, and that is powered by Gary,” Seamon said Tuesday at training camp. “All of them follow his lead, which makes my job a lot of fun.
“I give him great credit because he’s a veteran who waited for his time, but didn’t waste it. When he got his chance, he showed everyone how many things he could do.”
Seamon spent the past 13 seasons in the Bengals’ personnel department, but jumped at the chance to return to the field under new Cleveland coach Hue Jackson.
Barnidge is far and away the top tight end on the roster, setting career highs in 2015 with 79 receptions, 1,043 receiving yards and nine touchdowns. Seamon is confident that Barnidge will have another big season.
Second-year pro E.J. Bibbs appears to be the frontrunner for the backup spot, which is a hybrid position — part-fullback, part-tight end — in Jackson’s scheme.
“The second tight end is very prominent in this offense, which is nice when you consider Gary’s versatility,” said Seamon, who served as the University of Akron’s offensive coordinator from 1991-94. “Gary can be a point-of-attack guy, a slot guy, a blocker.
“My room is Gary and the kids, and there are a lot of opportunities here for the kids.”
Connor Hamlett and Randall Telfer are also in the mix, while fourth-round pick Seth DeValve will join the competition once his strained hamstring heals.
Hamlett spent the final month of last season on the Browns practice squad, but has not appeared in an NFL game. At 6-foot-7 and 259 pounds, he is an intriguing prospect.
“I think I have the ability to stretch the field,” the Oregon State product said. “With how big I am, just a big catch radius, mismatch potential and things like that.”
Telfer — a 2015 sixth-round selection out of USC — didn’t suit up as a rookie after undergoing surgery to repair a left mid-foot fracture. He said being around the team on a daily basis taught him about life in the NFL.
“I definitely learned that it’s a business,” he said. “There’s not a lot of room for error and it’s a lot different from college because everyone here is great. It’s kind of like an All-Star Game, but I’m definitely up for the challenge.”
DeValve is a fourth-round pick from Princeton with marginal college statistics. The 6-3, 250-pounder also was labeled as a reach by prominent draft experts, but his position coach has very high hopes.
“When you see Seth on the field, all of the questions will be answered,” Seamon said. “We spent a lot of time scouting Seth, and we like him because he’s a big guy who can really run. Hopefully he’ll be out there in the next few days.”
Checking in
Former Baylor coach Art Briles attended practice and visited with former Bears players Robert Griffin III, Josh Gordon, Corey Coleman and Spencer Drango.
Briles made a bold prediction about rookie wide receiver Coleman, who was the No. 15 overall pick in the NFL Draft.
“You’ll think he’s one of the best to ever put on a Browns uniform,” he said. “That guy is special now. He’s dynamite in a package, he’s tough, he’s explosive and he’s a fierce competitor. That’s really kind of what sets him apart. He loves to win.”
Briles was fired by the school after several members of his team were charged with sexual assaults. Allegations of victim intimidation continue to be investigated.
Gordon is one of a small number of Baylor players to be kicked out of the program during the scandal-plagued era, but remains close to his former coach.
“Josh has had his journey — we’ve all had our trials and tribulations — and we’ll judge at the end of the day,” Briles said. “Josh is a sweet, sweet spirit, a good person. You’ve always got to hope for the best for people, so I’m anxious to see the next phase of his journey.”
Injury update
Center Cameron Erving (left elbow) was hurt in a goal-line drill, forcing him to leave practice early. He returned to the field with a large ice pack from his elbow to his wrist.
“He’ll be fine, I think,” Jackson said. “He’s just got a ding. Obviously, though, we’ll check it out and see where he is.”
l Wide receiver Andrew Hawkins (hamstring) came up lame after catching a back-shoulder pass for a touchdown.
“These hamstrings this time of the year, it’s unfortunate,” Jackson said. “We’ll handle it accordingly and get him back out there as soon as we can.”
l Defensive lineman Kyle Rose (hamstring) remains hobbled, while defensive end John Hughes (personal reasons) was excused from practice.
Ominous answer
Josh McCown is the most experienced quarterback on the roster and one of the most well-liked players by his teammates.
Jackson, however, said McCown’s on-field performance will be the sole determinant if he makes the team.
Griffin and rookie Cody Kessler are virtually assured of spots, leaving McCown in a battle with Austin Davis for the last spot.
“My honest opinion? Being a mentor has nothing to do with him remaining on the team,” the coach said. “I think we know how all of this goes. This is not just about who you like, but what’s best for our organization.”
Extra points

Converted quarterback Terrelle Pryor caught three passes from McCown during the siren period of practice.
Cornerback Justin Gilbert was badly beaten by Pryor on a slant route in the red zone. He also had to be physically separated from Coleman after a play.
Fourth-round pick Derrick Kindred mishandled a potential interception when Griffin overthrew Bibbs in the end zone.