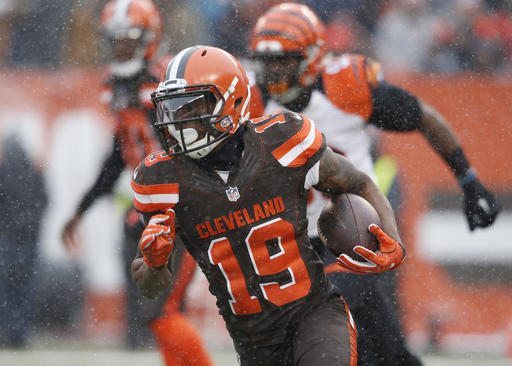 BEREA — The first snap of the scrimmage was a quick pass from Robert Griffin III to rookie receiver Corey Coleman.
The final play was a beautiful connection between the Baylor buddies for a 41-yard touchdown in the corner of the end zone.
Hue Jackson held his first scrimmage as Browns coach, with tackling throughout, and the new regime’s first draft pick was the star. Jackson’s handpicked quarterback, signed as a free agent, was the co-star.
Coleman, the No. 15 pick, caught four passes, including gains of 35, 53 and 41 yards.
He capped the big night with the touchdown, as cornerback Justin Gilbert had tight coverage, but Griffin III made a perfect throw and Coleman found a way to get both feet inbounds.
“We weren’t having a good drive,” Coleman said. “So I knew that I had to go up and make a play.”
The grab featured a lethal combination of soft hands, quick feet and great awareness.
“He knows how to score the football,” Jackson said. “He knows how to get from here to there very fast and get the ball in the end zone.”
Someone has to throw the ball for a receiver to stand out, and Griffin was on point. He went 6-for-7 for about 150 yards. The only miss was an errant dump-off over the middle intended for running back Isaiah Crowell.
Griffin threw perfect passes to Coleman on a double move to beat K’Waun Williams, a fly down the left sideline against close coverage from Tramon Williams and another double move for the touchdown.
“I just told him good job, let’s keep it going,” Coleman said.
“Some of the balls that he threw today, the location that he put them at, it was amazing,” Tramon Williams said. “I actually went up to him on the field after he threw the ball into the corner of the end zone and I told him, ‘Man, if you’re throwing the ball like that, you’re going to throw a lot of touchdowns this year.’
“That’s impressive what he’s come in and done so far.”
Jackson is expected to name Griffin the starter next week before the preseason opener Friday in Green Bay. Despite inconsistency in practices throughout the spring and summer, Jackson has never left Griffin’s corner.
“I keep saying it, you keep watching Robert get better and better and better right before your eyes,” Jackson said. “I think he’s trying. That’s all you can ask for. He’ll keep growing and keep going after it and good things are going to happen.”
The scrimmage featured nine series, many bogged down by offensive penalties. The second-team defense stopped the starting offense on the first two possessions, but Griffin and the starters rebounded to get the best of the No. 1 defense with two touchdowns.
The 53-yarder to Coleman set up a 2-yard touchdown to tight end Connor Hamlett, who beat linebacker Christian Kirksey to the corner. Coleman’s catch came after a slight push-off to gain a bit of separation. The official let it go.
“It was a push-off?” Coleman said. “I didn’t see no flags.”
Coleman said after his big night that if he has a bad practice, he has a bad day. The Browns entered their second week of training camp Friday, and Coleman has yet to have a bad day.
“I’ve really just been practicing really hard,” he said. “Coach Hue’s been on us tough and we really know what we’ve got to do. You practice how you play, so I take pride in coming here every day, putting my head down, practicing hard.”
A Coleman highlight has become a staple of a day at camp. He’s quick enough to get open underneath, fast enough to run past a cornerback and agile enough to make defenders miss when he has the ball. The entire package was on display Friday in front of an appreciative crowd.
“Well, that’s what he does,” Jackson said. “He’s not doing anything I’m surprised of. That’s why we drafted him. He’s a tremendously talented young man. He has some growing to do. He has some things he has to clean up and get better at. But he always finds a way to make a play.”
Jackson praised Coleman, then pumped the brakes.
“I don’t want to anoint this young man yet,” he said. “It’s way too soon. Has he shown some very unquestioned ability? Yes, he has. So I want to give him that, but at the same time he knows there’s some things I’m expecting him to get cleaned up here real fast in order to be the type of player I think he can be.
“He’s got to get lined up right. There’s a lot on his plate that we do that he’s got to learn how to handle the right way, and I think he will.”
Coleman didn’t sound as if the strong start had gone to his head.
“I think I did decent, some plays that I messed up on, some plays that I did good on,” he said, adding the No. 1 thing for him to work on is studying the playbook. “Some stuff is difficult but you’ve just got to stay in that playbook and really focus and take pride in studying that thing because that can keep a lot of people from playing.”
He played plenty Friday and had the big plays to prove it.
“I feel like he’s a special player and I’m excited to see what he can do this season,” Crowell said.
Contact Scott Petrak at 329-7253 or [email protected] Like him on Facebook and follow him @scottpetrak on Twitter.