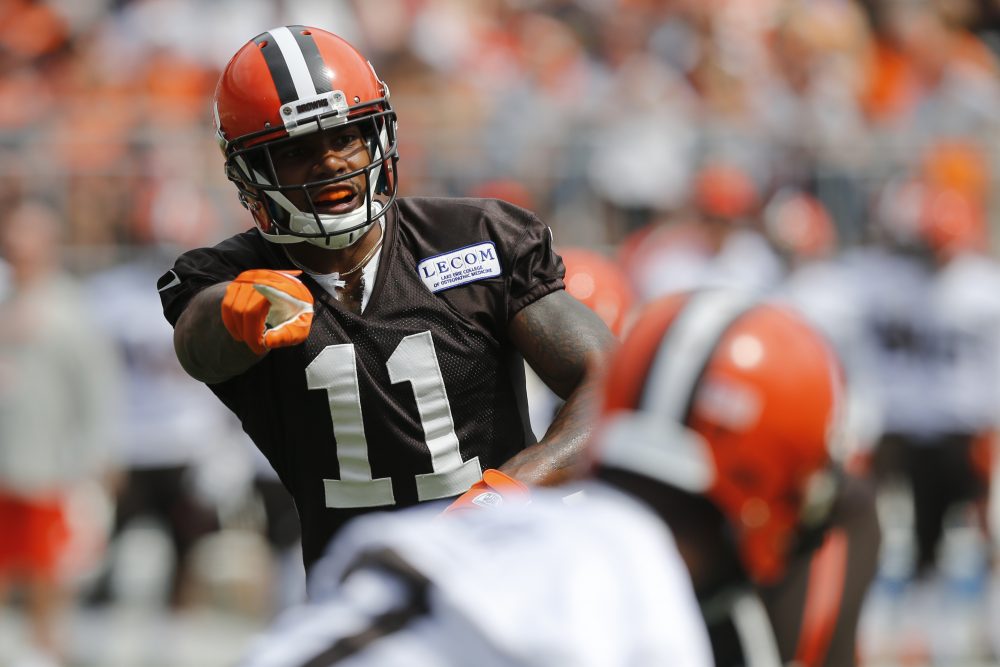 COLUMBUS — Terrelle Pryor came within inches of a perfect day.
He caught five passes Saturday, including touchdowns of 5 and 75 yards. He received loud ovations every time he touched the ball in Ohio Stadium, where he used to star as quarterback. He ended the scrimmage by running under a long Josh McCown pass, high-stepping into the end zone and sprinting toward the bleachers to raise his arms and start an OH-IO chant.
If only his deep pass off a handoff from Robert Griffin III hadn’t drifted inside and fell incomplete off the hands of receiver Marlon Moore.
He blamed the glove on his right hand necessary for his job as receiver.
“It is something that I have got to continue to work on and try to master,” Pryor said.
Quarterback is no longer his No. 1 priority, so Saturday was a resounding success. He took advantage of a 7-inch height advantage to outjump cornerback K’Waun Williams for the 5-yard score on a fade route from Griffin. He streaked past undrafted rookie cornerback Mikell Everette for the exclamation point from McCown.
“He’s done a tremendous job,” coach Hue Jackson said. “He has taken this opportunity and he is trying to make the most of it.”
Jackson then took credit for the position switch that could end up saving Pryor’s NFL career.
Jackson drafted Pryor as a quarterback when he was Raiders coach in 2011, then had him again in Cincinnati last spring as offensive coordinator.
“I didn’t have enough confidence to ask him to change positions at that time, and that’s why we let him go, because I felt like he needed to make a decision about what he needed to do,” Jackson said, referring to last year.
Jackson called close friend Craig Austin, who’s a mentor to Pryor.
“I said, ‘Tell him that maybe he needs to play receiver and do it full time,’” Jackson said. “He made that decision, and he has never looked back. I think we see the fruit of his hard work.”
Pryor talked to Austin and Jackson and decided to commit to receiver after being cut by the Bengals. The Browns signed him shortly thereafter.
Pryor (6-foot-4, 223 pounds) looks like a different player in Year 2 of the switch.
“Before I was like a bear, but now, it’s a gazelle,” he said.
Still part bear.
“He’s a big guy, physical, he’s got an elite trait that you can’t coach and that’s size,” Griffin said. “So he’s been able to utilize that while he’s been in camp this spring and we love the progress that he’s made.”
Pryor is allowed back around the Buckeyes football program after a five-year ban was lifted July 26 for his role in the school’s memorabilia scandal. He was embraced by the fans Saturday and noted he made plays from “a different angle.”
“It’s great to be back,” he said. “It’s a beautiful stadium.”
Coleman sits
Rookie receiver Corey Coleman warmed up but didn’t participate in the scrimmage. His left hamstring was wrapped in ice when the team took the field.
“He’ll be fine,” Jackson said. “He just had a little hamstring issue, and I just didn’t want to push it too far.
“We’re too close to getting ready for the season. He could have been out here if I wanted him to. It’s important to take care of our players and protect them that way.”
Coleman was the star of the scrimmage Friday in Berea with three long catches, including a touchdown.
Injury report

Tackle talk
Rookie fifth-round pick Spencer Drango worked at right tackle with the starters for the third straight day. He and third-round pick Shon Coleman are the front-runners to win the job.
“He’s working at it,” Jackson said of Drango. “He’s one of our young players who I’m excited about. I think he has a bright future here, but we’re still going to continue to search and find the best five linemen up there for our football team.
“I think the key to our football team will be our lines, offensively and defensively. If we can continue to improve and get better, then we’ll have a chance to be where we want to be.”
Drango displaced veteran Alvin Bailey, who switched to working at right tackle and right guard with the backups. He had a rough day Saturday, giving up what would’ve been a sack to outside linebacker Paul Kruger — the quarterbacks were off-limits — and drawing a penalty for a false start.
Planning for the future
Prime-time games are primarily reserved for teams with much expected of them. Hence, the Browns’ only night game is the mandatory Thursday-nighter, Nov. 10 at 8:25 at Baltimore.
The other 15 games are scheduled for a 1 p.m. kickoff, but Jackson used the Friday night scrimmage in Berea as an example of adjusting to variables.
“I talked to them about their process,” Jackson said Friday. “Hopefully someday we’re a team playing Monday night games, more Thursday night games, more Sunday early evening games because we’re becoming a really good football team.
“You have to handle all the things that can happen in the NFL. When you walk on this field, no matter what’s gone on, you have to eliminate distractions so when you come out you put your best foot forward.”
Impressed
Jackson said he was surprised to see so many Browns fans two hours south of home. The attendance was announced at 42,310.
“What a great environment and more so than that, what a tremendous turnout by our fans,” he said. “That says a lot about the following of the Browns. I know we have tremendous fans, but I never knew they traveled all over the place. That’s really great.”
Extra points

Kicker Patrick Murray got the first try and made a 43-yard field goal. Travis Coons was good from 31 and 35 yards.
Agent Drew Rosenhaus watched the scrimmage and talked to owner Jimmy Haslam. He represents Gordon and Haden.
Kruger had two “sacks.”
Second-year cornerback Charles Gaines started in place of veteran Tramon Williams, who got the day off.
Defensive back Pierre Desir broke up a pass in the end zone.