Browns Notes: Austin Pasztor latest to get shot at right tackle, has edge in starting experience 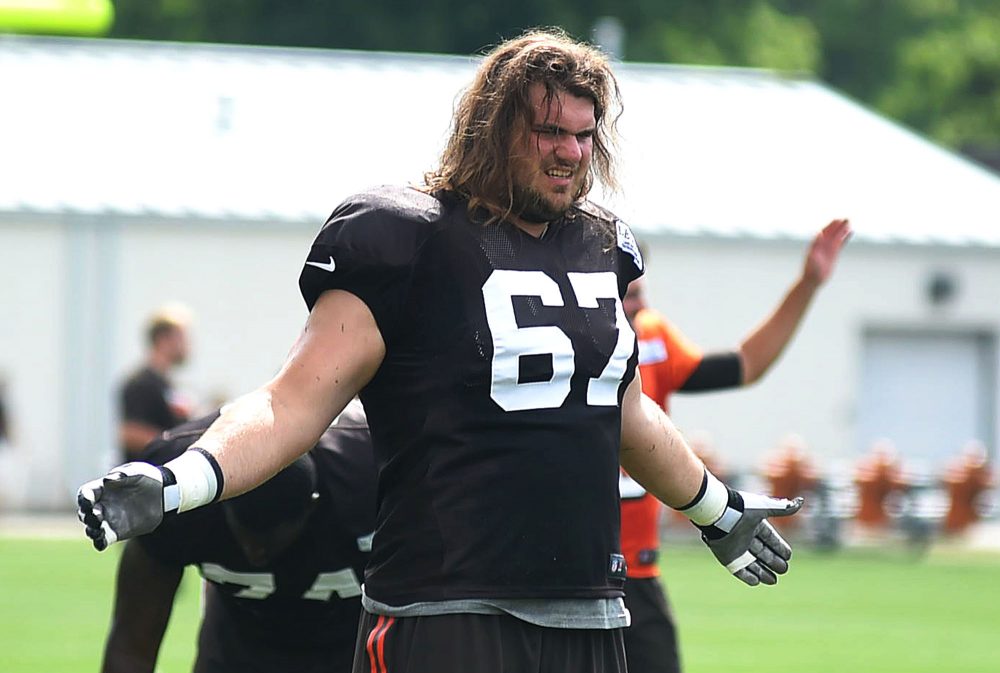 BEREA — Ten practices, three right tackles working with the first team, zero clarity at the important position.
Filling the void created when Mitchell Schwartz signed with Kansas City hasn’t been easy.
Austin Pasztor joined the starting offensive line Monday and remained there Tuesday. He’s the favorite to start Friday in Green Bay, but coach Hue Jackson said the position remains in flux.
“I’m just kind of mixing and matching the best that we can to find the five best guys,” Jackson said Tuesday. “We’ll settle on somebody for this week. It could change next week. We’re just going to keep matching and finding out who is best to play for us. Once we figure that out, we’ll keep it that way.”
Pasztor replaced rookie fifth-round pick Spencer Drango, who replaced veteran Alvin Bailey. Rookie third-round pick Shon Coleman could also get a look but entered camp behind after sitting out the offseason program following knee surgery. He left practice early Tuesday with heat cramps.
Pasztor (6-foot-7, 308 pounds) has the most experience, with 27 starts in four seasons, including 20 at right tackle with Jacksonville. He started four games at left guard for the Browns last year.
He figured his resume would lead to a turn with the starters at right tackle.
“I kind of had my mind ready for it,” said Pasztor, who opened camp as the first-team right guard while John Greco recovered from a hamstring injury. “I know they were looking for someone to fill that role.
“Having played against some really good pass rushers in those years gives me some confidence going forward. It’s going to be a lot of work and I really need to focus on my technique, but I think I’ll get there.”
Schwartz played every snap during his four seasons, so the revolving door is new.
“I think it’s no surprise we’re trying to find who’s going to be the starting right tackle,” left tackle Joe Thomas said. “Austin Pasztor did a really good job yesterday. He’s just a tough, hard-nosed guy.
“He’s got a couple years of starting experience under his belt. I think that’s huge in the NFL. It’s invaluable because things happen really fast. There is a lot to learn in a rookie season, so having a guy with some experience out there will be really important.”
PLAYING KEEPAWAY
Quarterback Robert Griffin went through his 10th training camp practice without throwing an interception in team drills.
“It’s good for the team,” safety Ibraheim Campbell said. “It’s sort of frustrating, you kind of feed off of big plays as a defensive back, so you kind of need those every once in awhile.
“The fact that he’s not providing those for us, it just means we have to work harder really.”
AIMING HIGH
Receiver Rashard Higgins, a fifth-round pick, has a specific, and lofty, goal for his rookie season.
“I want seven touchdowns, man,” he said. “However I can get them, I’m going to do it. Seven’s just been like a lucky number. Seven or more, man.
“Right now, they’ve got Corey (Coleman) in front of me. I know he was drafted in the first round. So if I come in, he needs a blow, I’m going to make that touchdown that he should have been in for. Then next year, it might be shhhh, I’m going to tell y’all that number next year. Y’all stay tuned for that one.”
Associate head coach-offense Pep Hamilton has been impressed with Higgins, who’s battling fellow rookies Ricardo Louis and Jordan Payton for playing time.
“For a young guy, his skill set is above average,” Hamilton said. “He can do a lot of things with regards to beating press coverage and running routes. His routes are fairly detailed for a young guy and he’s still a work in progress, but he’s shown tremendous progress over the course of training camp.”
SHOTGUN BLASTS
Center Cameron Erving snapped two balls over Griffin’s head in the shotgun and he had to leap to snare a third. Jackson blamed Erving missing practice time last week with an injured elbow. He returned to practice Monday and team drills Tuesday.
“He’s got to get that corrected,” Jackson said. “That’s him and the quarterback. I’m not going to coach quarterback-center exchange. You’re just going to fix it.”
Erving is expected to be the starter, replacing Pro Bowler Alex Mack, who left in free agency. But he has to prove in the preseason he can handle the job.
He said the elbow is fine and he planned to play Friday in the preseason opener in Green Bay.
POUND FOR POUND
Receiver Josh Gordon needs his quadriceps to heal — he needs the practice after being suspended for all of last season and he needs to be able to run to lose a few pounds. Art Briles, his coach at Baylor, said last week Gordon needed to lose weight and Jackson agreed.
“He’ll be the first to tell you that. He does,” Jackson said.
Gordon could start practicing next week.
“Hopefully soon,” Jackson said. “I think he’s getting closer each and every day. I’m looking forward to getting him out here on the field with the rest of the guys.”
Receivers coach Al Saunders raved about the work Gordon’s done off the field.
“He’s involved in the walkthroughs every day,” he said. “He’s involved in our meetings. I’ll tell you what — he’s a veracious student. He’s learning the system.”
SPEAKER OF THE HUDDLE
Hall of Fame receiver Paul Warfield addressed the team on the field before stretching. Owner Jimmy Haslam listened in.
“He was outstanding,” Jackson said. “To have him address our football team is very important for guys to see. He’s a very humble man from humble beginnings who worked hard to accomplish the things that he did.
“Eight-time Pro Bowler, two Super Bowl-winning teams, inducted into the Hall of Fame — he’s out here on our field and he’s one of our guys.”
EXTRA POINTS

Jackson said he hasn’t decided playing time for Friday but hopes to play all four quarterbacks.
Fullback Malcolm Johnson (concussion) and tight end Randall Telfer (knee) returned to team drills.
Defensive end John Hughes missed his sixth straight practice for personal reasons.
Pro Bowl tight end Gary Barnidge has been in team drills for a few days and said he’s had no issues. He had sports hernia surgery in June.
Pryor has added “SR” to the back of his jersey. He has a young son, Terrelle II.