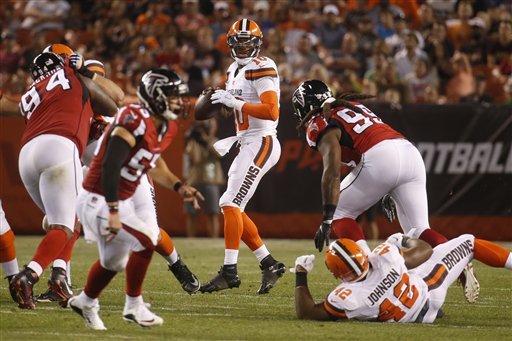 CLEVELAND — Robert Griffin III got rid of the interception and fumbled handoff and replaced them with a pair of touchdowns. He showed he’s still a running threat. He played five series and exited with the lead.
Griffin’s second try as Browns quarterback — his first at FirstEnergy Stadium — was a marked improvement from the loss last week in Green Bay.
The Browns were blanked by the Atlanta Falcons in the second half Thursday night and lost 24-13, dropping to 0-2 in the preseason. But new coach Hue Jackson had plenty of reasons to be pleased.
Griffin was at the top of the list.
He proved the 49-yard completion to receiver Terrelle Pryor last week wasn’t a fluke, finding him for a 50-yard touchdown on a go route on Cleveland’s second possession. Pryor ran right by Pro Bowl cornerback Desmond Trufant down the right sideline and Griffin put the ball on the money.
“We were able to get things clicking a little bit out there,” Griffin said. “Working the long ball.
“Still got a lot of things to work on. Just as a team continuing to work on doing things the winning way.”
Griffin isn’t a one-receiver quarterback, dropping a 29-yard touchdown pass on tight end Gary Barnidge’s fingertips down the right sideline in the second quarter. Barnidge ran an out-and-up, Griffin had time to wait for him to come open and lofted a pretty pass matched by Barnidge’s beautiful grab.
“Just two great plays by two individual players,” Griffin said of the touchdowns. “T.P. running by a guy, making a play for us. Then Gary making an amazing catch.
“Those things don’t happen without the offensive line blocking and the backs and everybody being accountable and being where they’re supposed to be. So I thought it was great execution on those two plays and we’d love to have that on every play.”
Travis Coons missed the extra point, giving the first-team offense 13 points. It had zero in two series last week and Griffin threw an interception intended for Barnidge near the goal line.
“He took care of the ball better,” Jackson said.
Griffin played nearly the entire first half Thursday, going 6-for-8 for 96 yards, two touchdowns, no interceptions and a near-perfect 154.2 rating. He added a pair of runs for 36 yards and was sacked once for 7 yards.
On the first rush he rolled right and elected not to throw to a pair of tight ends coming across the field. The second run came after a faked handoff and went for 22 yards before he slid to safety.
“Both of them were called runs,” Jackson said. “He was smart. He was able to take care of his team. What I mean by that — get on the ground. You’ve got to be out there playing, not standing next to me, and I think he’s gotten that message and he’s handled that right.
“We’re going to let him play quarterback. I think this guy is growing. I think we see it, and I think he’ll continue to get better.”
The protection was much improved over the Packers game, when Griffin was hit three times in 11 snaps. The sack Thursday came when second-year fullback Malcolm Johnson went low for a block and whiffed. The line, missing left tackle Joe Thomas (back), kept Griffin upright.
Second-year center Cameron Erving looked better blocking, although he did airmail Griffin on a shotgun snap. It’s been a problem during camp.
“It’s just something that can’t happen and he knows that, I know that, and we’ll make sure it doesn’t,” Griffin said.
Pryor’s only catch was the long one. He continues to make big plays on a nearly daily basis, solidifying his spot in the receiver rotation.
“I knew I had him when we called the play, I knew I was going to beat him,” Pryor said.
“They better back up ’cause he’ll run by you,” Jackson said. “He’s made some huge plays.”
The Browns recovered from a dismal opening possession to feel better about themselves at the halfway mark of the preseason. They had a penalty on the kickoff, a bubble screen was almost intercepted behind the line, running back Isaiah Crowell was stopped short on third-and-2 and Pryor was called for a personal foul.
The Browns had touchdown drives of 81 and 62 yards, and tried to establish the ground game that was absent last week. Crowell rushed seven times for 28 yards and Duke Johnson three for 6.
The first-team defense put up little resistance on Atlanta’s first series. The Falcons went 71 yards in nine plays, as former Browns offensive coordinator Kyle Shanahan called whatever he wanted and converted three third-and-1s, the last going for 19 yards and a touchdown on a Devonta Freeman run. Cornerback Justin Gilbert, the No. 8 pick in 2014, missed a tackle near the line.
The defense played most of the first half and stiffened after the terrible start, allowing only a field goal with 15 seconds left in the half. Falcons quarterback Matt Ryan went 6-for-11 for 78 yards and veteran backup Matt Schaub was 8-for-12 for 78 yards. The Falcons rushed 16 times for 78 yards, a 4.9 average, in the first half.
“We have to stop the run better,” Jackson said.
The players are supposed to be off today, but outside linebacker Nate Orchard said inside linebacker Demario Davis summoned the defense to team headquarters for a film session.
“We need to freshen up some things, some missed tackles,” inside linebacker Christian Kirksey said. “We have to freshen that up, but we’re flying around and getting to the ball.”
Coons is well on his way to losing the kicker job. He’s had a rough camp and missed a 33-yard extra point. Patrick Murray made a 38-yarder after a penalty, following his 46-yard field goal vs. the Packers.
Contact Scott Petrak at 329-7253 or [email protected] Like him on Facebook and follow him @scottpetrak on Twitter.