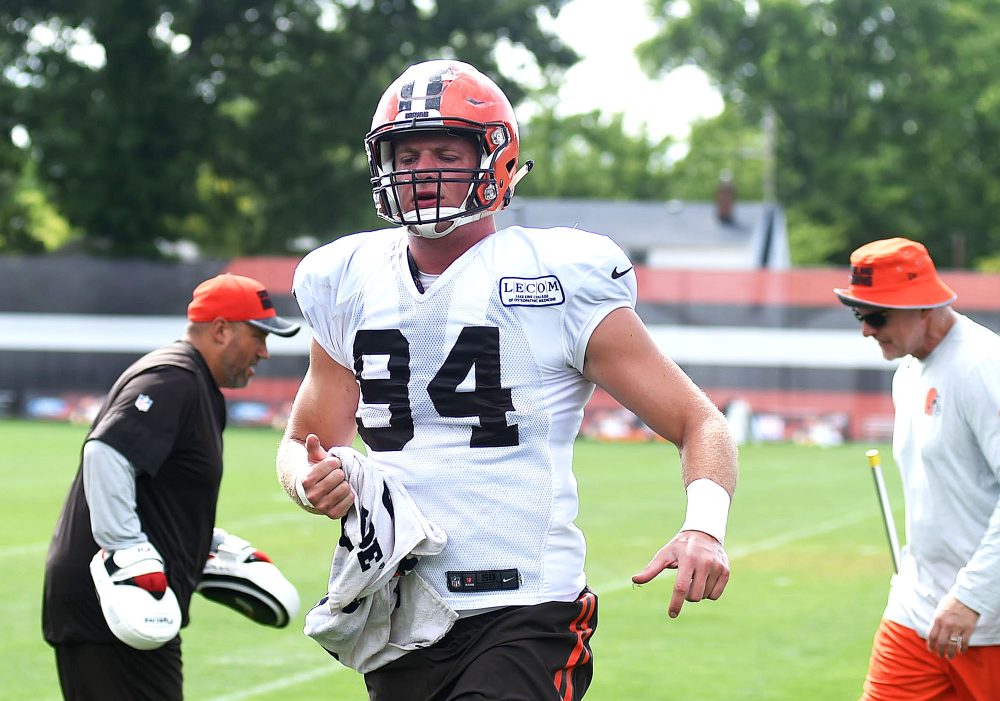 Carl Nassib, uneasy and brief when surrounded by cameras and microphones, holds back nothing as kickoff approaches.
“Carl’s a different person pregame,” fellow Browns rookie Emmanuel Ogbah said Thursday after the preseason loss to Atlanta. “Some people call him psycho pregame. But he loves to get after it.”
Nassib’s unique ritual has traveled from high school in Malvern, Pa., to Penn State to the NFL. It’s raised eyebrows at every stop.
“That doesn’t sound like me,” Nassib said. “No, yeah, that was me.
“I just love gameday, it’s really fun for me. I get passionate.”
Nassib, a 6-foot-7, 275-pound defensive end drafted in the third round at No. 65, has made quite an impression with a sack in each of his two preseason games, including a strip of Atlanta’s Matt Simms and the recovery. He had a third sack negated by a Justin Gilbert penalty and has a pass defensed and four tackles.
“He makes plays,” coach Hue Jackson said. “The guy is doing some really good things, and he’s going to be a good football player, obviously. He has to keep learning how we do things, how we go about our business on defense and keep getting better, but he has the characteristics that we’re looking for.”
A quick first step is the key to Nassib’s pass-rushing prowess that included a Penn State-record and nation-best 15.5 sacks as a senior. But the journey to success starts well before the coin toss.
In the locker room. With Eminem in his headphones.
“Lot of Eminem,” Nassib said. “Oh, yeah. Just like a whole playlist of 20 Eminem songs I listen to on repeat.”
He doesn’t let the rapper have the last word.
“He would be standing on the sideline, pacing back and forth, screaming at the other team, obscenities,” Penn State defensive line coach Sean Spencer told The Chronicle-Telegram. “That’s him. He didn’t really talk crap to the opposition. He yelled out his emotions.
“He probably said some things that were borderline psycho. He didn’t care what people thought. Never cared.”
Ogbah, another pass rusher taken 33 spots before Nassib, didn’t expect the pregame show when they arrived in Green Bay for the preseason opener.
“The first time I saw it it caught me off-guard,” Ogbah said. “He just screams, ‘Let’s go.’ Yells. It’s Carl. That’s how he acts.
“He does it in (the locker room) and once we get outside, he gets more intense.”
Ogbah said Nassib is a funny guy — Nassib returned the compliment — and the sense of humor comes to the surface when there isn’t a crush of media.
You scream expletives on the field?
“No. I’m Catholic, I don’t curse,” Nassib said. “I’m Irish, so maybe a little bit.”
Do you tone it down by the national anthem?
“Most times, of course,” he said. “I’m a patriot.”
The screaming isn’t likely to stop anytime soon, but it wasn’t always embraced. In high school he got an intervention from the head of the school.
“‘Are you OK? Do you need to see somebody?’” Nassib said. “But that’s just how I approach gameday, a lot of energy, a lot of excitement.
“Every football player has a switch that you put on when you go to practice and you put on when you get on the game field. So I keep that switch off when I’m off the field and keep it on when I’m on.”
He believes the transformation speaks to his personality.
“I just love football and I love playing against other teams,” he said. “I love winning.”
The competitive spirit was on full display when he went from a Penn State walk-on told he didn’t have an NFL future by coach Bill O’Brien to starter, sack leader and third-round pick.
“He came to Penn State on a mission, proved he should’ve probably been offered out of high school,” Spencer said. “He made himself a great player. He maximized the film room, maximized every repetition.”
“I always had dreams of playing in the NFL since as long as I can remember,” Nassib said. “A lot of people did not agree with that and that never deterred me from my dream. Bill O’Brien told me what he thought, so I just kept working my hardest and never let that faze me.”
The fast start to the preseason made a reporter suggest the game looks easy for Nassib.
“I appreciate that,” he said. “It’s not easy, but I just want to continue to work hard and be the absolute best to help my team win.”
Sacks are job No. 1, especially for a team searching for a dominant pass rusher.
“He’s been tremendous for us,” inside linebacker Chris Kirksey said. “A young guy like that that can get to the quarterback. He’s pretty big, but a guy that can move like a smaller guy, that’s a good thing to have.”
Nassib isn’t just a pregame “psycho.”
“Carl’s a baller,” Ogbah said. “He has a knack for getting to that football. He’s a great player and we’re glad to have him.”
Contact Scott Petrak at 329-7253 or [email protected] Like him on Facebook and follow him @scottpetrak on Twitter.

Browns sound alarm: Tackling must be fixed in order for defense to stop getting run over
Browns Notes: Coach Hue Jackson says he needs to get to know WR Josh Gordon as a player, see him with the starters before suspension