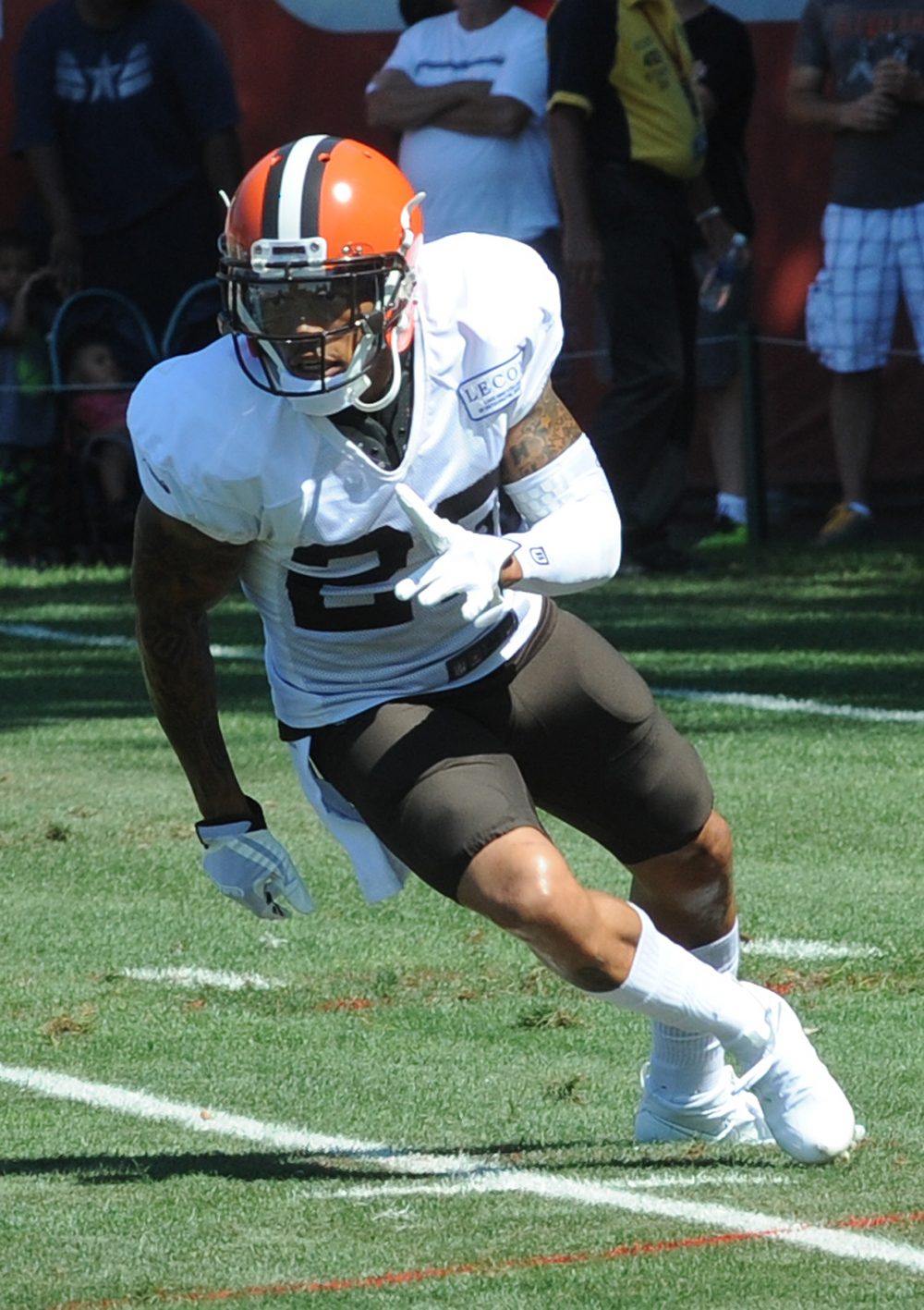 BEREA — If a week in August can be huge, this qualifies as one for cornerback Joe Haden.
He will practice twice in Florida, butting heads with Buccaneers receivers Mike Evans (6-foot-5, 231 pounds) and Vincent Jackson (6-5, 241) in the teams’ joint practices Tuesday and Wednesday. He is scheduled to play Friday in his first game since Nov. 1. He has a new partner at cornerback in Jamar Taylor, who displaced Tramon Williams with the first-team defense.
Haden (5-11, 195) is motivated to get back to his Pro Bowl form of 2013 and ’14 and leave last season in the past. He struggled early and suffered injuries to his ribs, finger and ankle, in addition to the two concussions that ended his season after only five games.
The regular season is less than three weeks away, and Haden said he’s where he needs to be.
“For sure,” he said Sunday after practice. “It’s been going really well. I haven’t had any setbacks, ankle’s just been getting better and better.
“It feels good to be back out there. It feels really good to be going against other players, lining up, backpedaling, breaking on passes.”
Haden began camp on the physically unable to perform list following ankle surgery in March after he aggravated the injury from last season. He returned to practice Aug. 8 and has worked back into team drills. The game against the Bucs will likely be his only action of the preseason.
“I want to see them play in a game against a different opponent and come out there and prepare and get ready for a game because a couple of weeks from now, it’s real,” coach Hue Jackson of Haden and rookie receiver Corey Coleman, who missed the first two preseason games with a hamstring injury. “They need to have that experience heading into our first game.”
The trip to Tampa comes at the perfect time for Haden. He’s been fully cleared to practice and play and needs as many quality repetitions as he can get.
“Just to be able to get some competition against another NFL team that’s really just going after you,” he said. “So it’s going to be some real competition and I think being able to go back full-go finally against another team, trying to get after it, is going to be really good for me.”
In a secondary filled with questions, the Browns need Haden to be an answer. The No. 7 pick in 2010 is 27 and should be in his prime and holding down the opponent’s best receiver every Sunday.
“Joe is a leader in our locker room, so it provides a huge boost of energy and morale when he comes back in,” inside linebacker Demario Davis said. “He’s not coming back into a slight challenge. He’s going up against a top receiver in Evans and it’s going to be a great challenge for him. From what I’ve seen him do in practice, I know he’s ready and more excited than anybody and looking forward to the challenge more than anybody.”
The coaches made a significant lineup change Sunday, moving Taylor ahead of Williams, 33, who started 15 games last year in his first season with the Browns after seven as a starter with the Packers. Taylor showed enough as the nickelback to get the promotion to the outside he wanted.
“Anybody that we put out there first, they have a chance to claim what is there’s and what they want,” Jackson said. “He is going to get that opportunity, and he has to make the most of it.”
Taylor was a second-round pick of Miami (No. 54 overall) in 2013 but started only nine games in three years. He was traded to the Browns on the final day of the draft in order for Miami to move up 27 spots in the seventh round.
“He has done everything that we have asked him to do, he has done it the right way and he is a good football player,” Jackson said. “He plays the game the way we want him to play it. He made some plays the other night on the ball. I expect our corners to get their hands on balls and defend the other team’s receivers.”
Taylor struggled with injuries as a rookie in Miami and never got his footing. But Haden sees a player with the talent to be a strong starter.
“You can tell by just people doing individual drills and the way that he comes out of his breaks, the way he understands football, the way he understands concepts, he’s a smart football player and his ability to lock people up in press coverage,” Haden said. “Just watching him play, he’s a good player in the league.”
Williams moved to the nickelback with the first team Sunday and has experience in the slot.
“Tramon is fine and will do a good job for us, too,” Jackson said.
Haden didn’t want to leave out Williams when discussing Taylor and said Williams is a team guy who won’t let the demotion sour his attitude.
“We just got a group of dudes that know the game,” Haden said. “Tramon, his knowledge of football is impeccable, so I always ask him certain things. With us three being able to be out there, I think every one of us can cover a No. 1, No. 2 guy for sure. And just us working together is going to be special.”
Contact Scott Petrak at 329-7253 or spetrak@chroniclet.com. Like him on Facebook and follow him @scottpetrak on Twitter.

Browns Notes: Coach Hue Jackson says he needs to get to know WR Josh Gordon as a player, see him with the starters before suspension
Browns: Kicker battle brewing