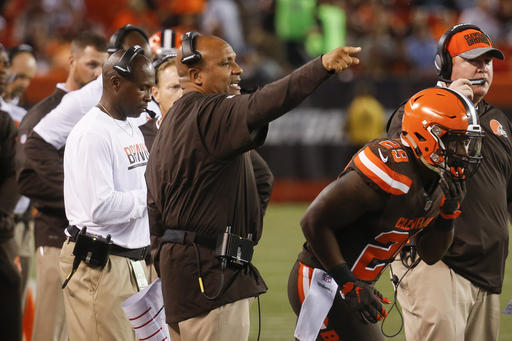 Coach Hue Jackson went against the grain — and bucked conventional NFL wisdom — in the Browns’ preseason finale Thursday.
Good for him, because trying to emulate other teams is one of the myriad reasons Cleveland has failed to forge an identity during its expansion era.
Jackson played his offensive starters for the entire first quarter, then treated the second period like it was a petri dish in a laboratory, experimenting with pass routes all over the field.
Though the Chicago Bears outscored the Browns 12-7 in the first half en route to a 21-7 victory, it was anything but a meaningless exhibition for the home team at FirstEnergy Stadium.
“I liked having the starters out there for a while because my message to them was the grind starts now,” Jackson said. “I thought that was good, then we were able to get them out.
“The preseason is the preseason. Now, it’s time to play real football.”
Quarterback Robert Griffin III was shaky in completing 4 of 8 throws for 31 yards and a poor 59.9 passer rating, but avoided being sacked as a result of the play calls and the presence of Pro Bowl tackle Joe Thomas.
Running back Isaiah Crowell averaged just 1.8 yards on six carries, yet bullied his way into the end zone for a 4-yard score on Cleveland’s final snap of the first quarter, giving it a 7-3 lead.
None of those numbers, though, were as important as 16 — the total snaps the Browns’ first-team offense ran against an all-backup defense fielded by the Bears.
“I’m with Coach 100 percent, the preseason is the time for the coaches to evaluate,” Griffin said. “It’s not my job or any other players’ job to assess anything. Now, we all can focus on what we do best, and that’s to game plan for a specific opponent each week.”
Fortunately for Cleveland’s front office and coaching staff, the bar has been set extremely low over the past month.
There truly is nowhere to go but up after the Browns went 0-4 in the preseason and were cumulatively outscored in every quarter, including 30-19 in the first.
Moving forward, they will play the first four regular-season games without All-NFL wide receiver Josh Gordon, who will be serving his latest league suspension.
Jackson maximized his top playmaker’s work against the Bears, running deep patterns throughout the opening half while Griffin and Josh McCown targeted him.
Gordon hauled in one of two throws from the former and two of four from the latter, gaining a team-high 29 yards. He was visibly winded from running so many long routes, which no doubt was another point his coach wanted to hammer home.
“We threw some balls at Josh and he made some plays,” Jackson said. “I think he’s excited about what’s ahead for him this season, and he’s looking forward to working hard with us over the next four weeks.”
As expected, there were some ugly mistakes, including the Browns-est sequence of the preseason.
One play after being penalized for having 12 men on the field, the Browns used 10 defenders on a 1-yard touchdown run by Bears running back Ka’Deem Carey. Adding to the hilarity, they also used 10 players on Chicago’s subsequent extra point try.
Other lowlights were Patrick Murray flubbing a 31-yard field goal, punters Kasey Redfern and Michael Palardy putting their NFL careers in jeopardy and cornerback Charles Gaines losing his footing and his helmet while being beaten for a catch by Kevin White.
The overall vibe in Cleveland’s locker room, however, was positive.
The Browns didn’t embarrass themselves, as was the case in their previous game, and they didn’t suffer any significant injuries — making the evening a success for Jackson and his out-of-the-box strategy.
“We got out there and showed what we could do,” Pro Bowl tight end Gary Barnidge said. “We’re going to keep working, and I’m looking forward to the regular season.”
Contact Brian Dulik at 329-7135 or [email protected] and follow him on Twitter @BrianDulik.