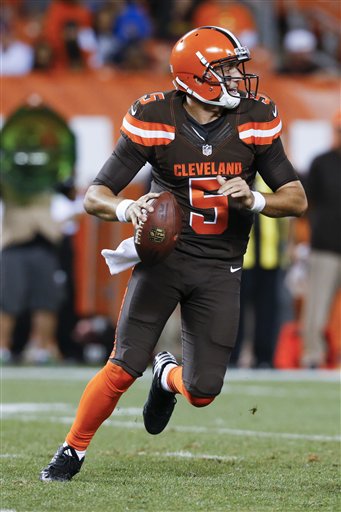 One game into the 2016 season the Browns are one blindside sack away from the start of The Cody Kessler Era.
Talk about putting pressure on your offensive line.
Say this for the Browns: they are the worst team in the NFL — and it’s not even close — but they are still the most morbidly entertaining organization in all of professional sports.
They are simultaneously unwatchable and spellbinding.
No team gives you more bang for your yuks than this one. You just don’t see this kind of stuff every day.
The starting quarterback getting hurt while trying to run out of bounds so he doesn’t get hurt?
A fake punt in which the punter either wasn’t on the field, or was camouflaged within the formation, thereby removing the very object of deception required to successfully run the play?
Priceless.
Was it a fake punt, or a fake fake punt?
Whatever it was it lost 6 yards, and deserves to never be seen again.
How about the opposing team’s rookie quarterback having a career day, on the first day of his career? He led his team to a blowout win over the team that — such delicious irony — could have drafted him, but traded the pick to Philadelphia, which gladly did. Then Browns officials, post-game, defending their decision by saying, “Let’s see how he does over the rest of the season,” the implication being, “We know we stink, let’s see how he does against real teams.”
What part of that swampy logic is the gummiest?
It — and I mean that in every sense of the word — never ends. Only the years and the coaches change. The losing, the unwatchable, spellbinding losing, does not.
A year ago, in the first game of the season, quarterback Josh McCown helicoptered into the Jets’ end zone and out of game with a concussion.
In the first game this year, quarterback Robert Griffin III broke his shoulder and will be replaced in the second game by McCown, the career backup who, at age 37 — over 10 years older than most of his teammates — is, on this team, more chaperone than quarterback.
Diligently trying to avoid it as much as he and the Browns might, McCown keeps getting thrust into the starter’s role. It’s a role for which there are acres of statistics to prove he is ill-suited, but one he must now assume once again. He’s the perfect backup/starting alternative for a franchise that seems intellectually and genetically incapable of acquiring a quality NFL quarterback.
Not a Hall of Famer, mind you, just a good one. Yet regime after regime after regime — what is that, three regimes? So we’re talking the last couple years — seems overwhelmed by the task.
The most recent wrong turn involves Carson Wentz, the gunslinging greenhorn who riddled the Browns’ so-called defense for 278 yards passing, two touchdowns, and had, according to Pro Football Focus, the fourth-highest quarterback rating of the day, behind Andrew Luck, Derek Carr and Drew Brees.
But as the Browns were quick to point out, indirectly, Wentz did all that against them. And they are not very good.
I would argue, however, that Wentz doing what Wentz did — he also threw zero interceptions — in his first NFL regular-season start trumps in significance the fact that he did it against the NFL’s worst team.
He looks like an NFL quarterback. He’s big like an NFL quarterback. And because he’s big he has a better chance of being durable, another preferred trait in an NFL quarterback.
He seemed, and, after one NFL start, seems to be what any team without a quarterback would be looking for in one.
Except the Browns, who didn’t think he was a franchise quarterback. They ought to know, because they haven’t had one in this century, or, with only a couple possible exceptions, the last one.
If you have no quarterback, and you are in a position in the draft to get the best, or second-best quarterback that year, but you choose not to do so, you deserve whatever follows.
One game into the 2016 season the Browns are getting what they deserve for passing on Carson Wentz. Whether or not he becomes a franchise quarterback is beside the point. He’s clearly better than anyone the Browns have, and the goal of running any franchise is, and always should be, to get better.
With Wentz, even with all the losing still to come this season, at least the year could have been used to develop a quarterback who’s better than anyone the Browns had, and could eventually become The Guy.
Without Wentz, and without Griffin — or even with Griffin — this is another year wasted by a team that hasn’t had a quarterback in forever, and still seems strangely apathetic about committing to one.
Contact Jim Ingraham at 329-7135 or [email protected] Follow him on Twitter @Jim_Ingraham.