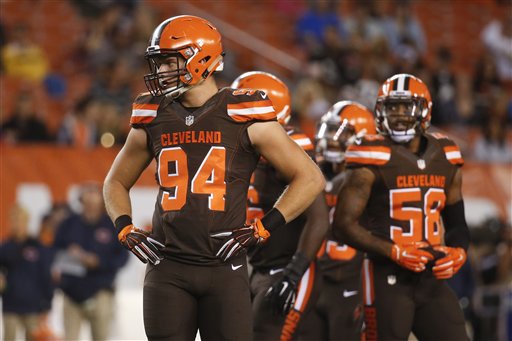 BEREA — Defensive end Carl Nassib made an immediate impact in his NFL debut last weekend.
The third-round pick from Penn State was the only Browns player to collect a quarterback sack, tackle for loss, and pass breakup in a 29-10 loss at the Philadelphia Eagles.
Nassib finished with four tackles and led Cleveland’s defensive linemen with 54 snaps, prompting coach Hue Jackson to give him a second straight start Sunday when the Browns host the Baltimore Ravens.
“You want one thing from a pro football player — the consistency of doing things the same way all the time — and Carl is that kind of guy,” Jackson said Thursday following practice.
“He is a full-speed football player and he likes playing the game. I’m glad we have him.”
In Week 1, the 6-foot-7, 275-pounder raised eyebrows by using NBA great Dikembe Mutombo’s finger-wag after sacking Eagles rookie Carson Wentz. None of his teammates or coaches were upset about the celebration, but were surprised which gesture he chose.
“It was kind of a spur-of-the-moment thing, I guess, because I didn’t have it in my mind,” Nassib said. “I didn’t do anything like that in college, not that I can remember.
“If it was on third down, most of the time I would just sprint off the field because I was so tired. Dancing takes a lot of energy, so nah, I never danced.”
It wouldn’t be surprising, though, if the two-time All-Academic Big 10 honoree did bust a move at some point.
The biology major (and aspiring doctor) is a walking contradiction: a calm man with a desert-dry sense of humor off the field, and an out-of-control lunatic with a foul mouth on it.
Nassib, who has become good friends with low-key linebacker Joe Schobert, makes no apologies for the disparate personalities.
“Any D-lineman or, really, any defensive player has a switch that you have to flip,” Nassib said. “I’ve always just had it because football is a fun game to play.
“You can’t be a crazy maniac amongst normal people because you have to be a normal person of society. That’s about it.”
Still salty
Wide receiver Terrelle Pryor has been designated the emergency third quarterback against the Ravens. Ironically, it was Jackson who initially suggested that Pryor become a wideout two years ago when he repeatedly failed to continue his career as a QB.
Pryor — the former starting quarterback for Ohio State and the Oakland Raiders — made it clear that he didn’t want to discuss the situation.
“Obviously, I wasn’t that good anyways,” he said curtly.
Josh McCown will start against Baltimore with rookie Cody Kessler as his backup. Pryor was asked if he believed he could step in and succeed if McCown was injured in the game.
“Nothing is going to happen to Josh,” he said, cutting off the question.
Hawk takes flight
Andrew Hawkins has taken over as the Browns’ player union representative. The 30-year-old wide receiver said he has been interested in the job for several seasons.
“It’s important, and I think the time is right for it,” he said. “I’ve always been involved with the Players’ Association as much as I could be, going to meetings and dealing with a lot of those guys, so it’s a duty I won’t take lightly.”
Injury update
Browns cornerback Marcus Burley (groin) and safety Derrick Kindred (ankle) were limited in practice, while guard John Greco (back) and Pryor (shoulder) were full participants.
Dollars and sense
The Browns’ franchise is valued at $1.85 billion, which ranks 27th in the NFL, according to Forbes’ annual report on the 32-team league.
Jimmy and Dee Haslam purchased the club for $987 million from Randy Lerner in 2012, but have seen it nearly double in value as a result of the NFL’s massive national television contracts.
Forbes reports that the Browns’ revenue is expected to reach a team-record $347 million this year, representing a $34 million gain from 2015.
Tele-visions

The Browns/Ravens game will be televised in the fewest markets among all Week 2 games around the NFL.
WKYC-TV 3 sports director Jim Donovan will serve as the master of ceremonies Sunday when the Browns unveil a statue of Jim Brown outside FirstEnergy Stadium.