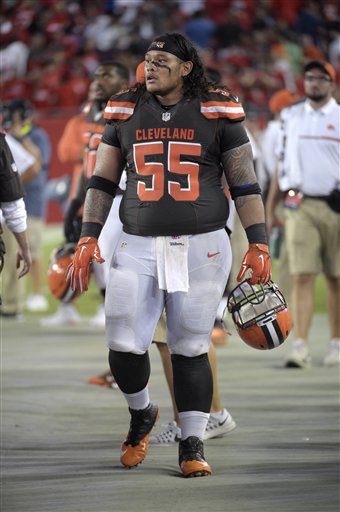 BEREA — Of the many words used to describe nose tackle Danny Shelton’s rookie season with the Browns, disappointing and dormant may be the most accurate.
New Cleveland coach Hue Jackson, however, chose a much different “D” word to sum up Shelton’s play in Week 1 against Philadelphia.
“Danny is starting to become dominant up front for us,” Jackson said Thursday. “I thought there were some things that he did really well against the Eagles. At times, he even got some knockback on the offensive line. That was a huge improvement.
“He is really starting to come on, and we are looking forward to watching him play this weekend.”
Though Philadelphia rolled to a 29-10 victory at Lincoln Financial Field, Shelton was one of a handful of bright spots for the Browns. He made four tackles and wasn’t overwhelmed by former Pro Bowl center Jason Kelce, either on running or passing plays.
Defensive coordinator Ray Horton used the 6-foot-2, 335-pounder as part of a four-man rotation with Carl Nassib, Xavier Cooper and Jamie Meder — limiting longtime NFL starters John Hughes and Stephen Paea to supporting roles.
“I’d say it was my best game so far, but I feel like I could have been better,” said Shelton, who has lost 30 pounds since the end of last season. “I definitely had some plays that I felt good and comfortable with, and I’m just looking forward to carrying that on the rest of the season.”
The next challenge for the second-year pro arrives Sunday, when Cleveland opens its home schedule against the Baltimore Ravens.
Shelton has played in all 17 games since being the No. 12 overall pick in the NFL Draft, starting 16. He will square off with Ravens center Jeremy Zuttah, who is 2 inches taller but 30 pounds lighter.
“I’ve got to come with another game plan because the Ravens have a different type of running scheme compared to the Eagles,” Shelton said. “But the most important thing is for me to stay true to my technique because pad level will really kill you against these big linemen.”
Horton and defensive line coach Robert Nunn have emphasized pad level since first meeting with Shelton in the spring. They agree he’s shown great improvement in keeping them low, but must maintain his form during extended drives by the opposition.
“Most definitely, I need to do that every week because my mind kind of dozes off when I’m in the game in a zone,” the Washington product admitted. “Throughout the week, I’ve got to continue to focus on having low pads and staying square on the line.”
Shelton also is spending more time taking care of his body between games, which he admits wasn’t a priority last year when his workload was much lighter under former coach Mike Pettine and former defensive coordinator Jim O’Neil.
“A good coach used to tell me your body is a paycheck, so you’ve got to take care of it,” he said. “Getting treatment, recovering, getting rest, those things allow you to perform the same way from the week before. As long as I can stay in that routine, it will definitely help me out throughout the season.”
Jackson said he approves of Shelton’s physical maintenance plan, but plans to keep pushing him in terms of technique. He cited Shelton’s natural upper leg strength as a potentially big advantage as he matures.
Unlike most defensive tackles that either clog the line or rush the pocket, Shelton has the quickness and the strong base to do both.
“We know he’s a big guy, but at the same time, Danny has to use his athletic ability and his hands and legs to push people,” Jackson said. “He’s starting to do that, but we need him to do it consistently. I think he is trending in that direction.”
Contact Brian Dulik at 329-7135 or [email protected] and follow him @BrianDulik on Twitter.