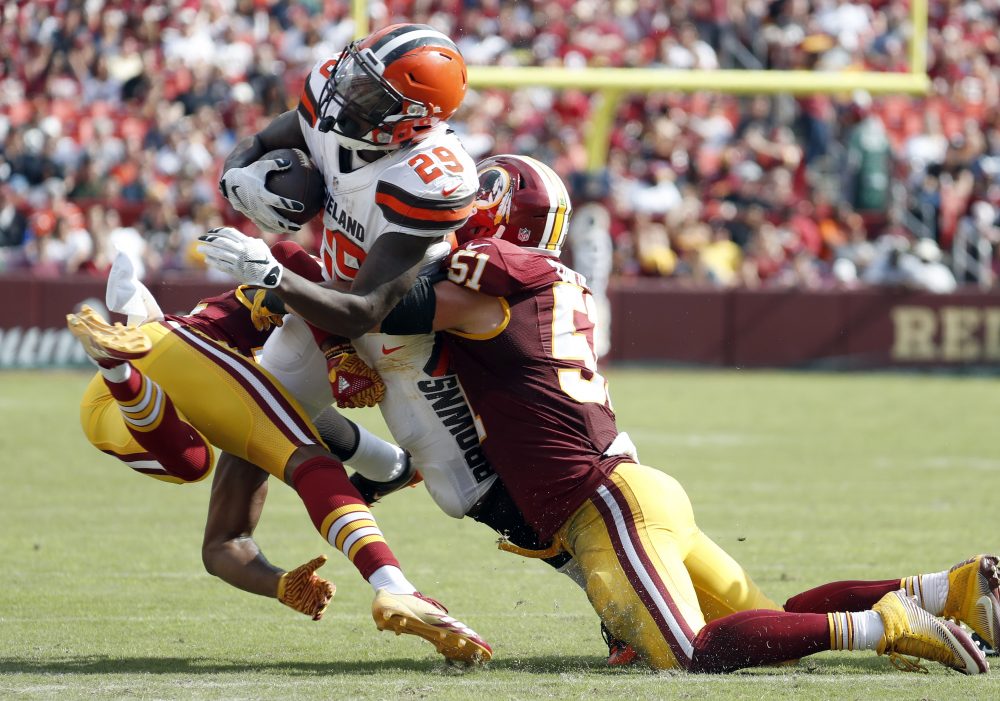 LANDOVER, Md. — His Cleveland Browns were ahead late in the third quarter Sunday and closing in on a score to pad that lead, when coach Hue Jackson called for a handoff to fullback Malcolm Johnson , a second-year player who had never run the ball in the NFL.
So what happened? Well, these are the Browns, so you probably can guess: Johnson fumbled, the Washington Redskins recovered at their 9 and then drove 91 yards for a go-ahead TD.
On Cleveland’s next possession, Duke Johnson fumbled, also in Redskins territory. And while he stood up holding the ball, it was ruled that the Redskins grabbed that one, too.
And, yes, on Cleveland’s next turn with the ball, rookie quarterback Cody Kessler — playing because of injuries to former Redskins QB Robert Griffin III and Josh McCown — underthrew Terrelle Pryor for an interception, which led to another Washington touchdown.
Three consecutive second-half turnovers Sunday helped the Browns do themselves in yet again, losing 31-20 to the Redskins to drop to 0-4 in Jackson’s first season in charge.
“I’m not concerned about what’s going to happen in our locker room,” Jackson said, completely unprompted, during his postgame news conference.
This was the third straight game that Cleveland lost despite leading. In Week 2, the Browns were up 20-2 against the Baltimore Ravens before losing 25-20.
In Week 3, the Browns led the Miami Dolphins 13-10, then missed a potential winning field-goal attempt at the end of regulation before being defeated 30-24 in OT.
On Sunday, Cleveland erased an early two-TD deficit to go ahead 20-17 in the third quarter.
“There’s no moral victories anymore when you do it three games in a row,” offensive lineman Joel Bitonio said. “We’ve just got to take the next step as a team and turn one of these into a win.”
Probably won’t get any easier next week: Cleveland hosts the New England Patriots, who will get quarterback Tom Brady back from his four-game “Deflategate” suspension.
Against Washington (2-2), the Browns wasted another strong performance in the running game, with Isaiah Crowell gaining 112 yards on 15 carries and Duke Johnson adding another 53 yards on nine runs.
But neither was in the game — the latter was being checked for a concussion — on the pivotal first-and-10 play at the Washington 16 with a little more than a minute to go in the third quarter.
Instead, it was Malcolm Johnson, a second-year back.
Asked about that being the player’s first carry in the NFL, Jackson said: “That has nothing to do with it. Malcolm practices at that position, carrying the ball. Malcolm is a pro football player that gets paid on the football team and he can carry the ball.”
There were, to be sure, other issues for the Browns — off the field during the week, and on the field Sunday.
One example away from football: Right guard Alvin Bailey was arrested on suspicion of driving while impaired after the loss to Miami and missed the game against Washington. Jackson confirmed Sunday the player was disciplined by the team.
“I’m trying to lay the right foundation for our organization,” the coach said. “I’m not going to put up with foolishness from any of our players.”
Another: Suspended receiver Josh Gordon said he is entering rehab, and Jackson said the Browns “moved on” from the playmaker.
On Sunday, Austin Reiter filled in at center, but exited with an injured left knee.
A week after putting up combined throwing, rushing and receiving stats not seen in more than 50 years, Pryor was dropped for a 6-yard loss out of a Wildcat formation on Cleveland’s second snap and didn’t get another carry. He never threw a pass. And he finished with five catches for only 46 yards, although he did come up with his first NFL TD grab (and then got flagged for unsportsmanlike conduct with an homage to NBA superstar LeBron James).
Cleveland’s biggest problem, though, were the turnovers.
“It’s kind of a bitter taste,” Crowell said, “just because I felt like we had the ‘W’ in our hands and we gave it away.”