Browns Notes: Another change coming at center with Austin Reiter out for year with torn ACL 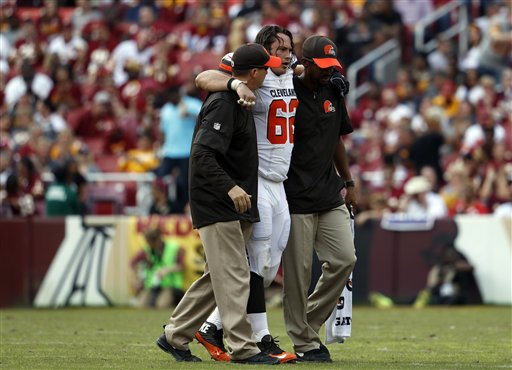 BEREA — Austin Reiter is headed to season-ending injured reserve after tearing the anterior cruciate ligament in his left knee, and the Browns are going back to the drawing board to fill the void at center.
Reiter made his first NFL start Sunday in the 31-20 loss to Washington and exited in the fourth quarter after his leg bent awkwardly as he pass blocked. The Browns (0-4) rushed for 164 yards and a 5.8 average, and quarterback Cody Kessler was sacked only once.
“He did an outstanding job,” Jackson said Monday of Reiter, who was signed off Washington’s practice squad Sept. 20. “He battled. He gave us an opportunity to run the ball extremely well. He did a great job in directing protections and doing those things, so it was unfortunate he got hurt.”
Cameron Erving started the season at center but suffered a bruised lung in Week 2 and will miss his third straight game Sunday when the New England Patriots visit FirstEnergy Stadium. John Greco moved from right guard to center for Week 3 but went back to his normal position against Washington when Alvin Bailey was benched after being charged with OVI.
Greco expects to slide back to center this week with Reiter out. Bailey would likely return to the lineup at guard.
“That’s what I’m expecting,” Greco said of playing center.
Jackson didn’t want to commit to Greco as the center until the team could look for alternatives Monday night and Tuesday. The Browns don’t have a backup center on the roster, so an addition is likely.
“We’ll do everything we can to see if we can improve in that area,” Jackson said.
The Bailey punishment was for one game.
“I don’t hold grudges,” Jackson said. “Once we make a decision and talk, we move on from things.”
INJURY REPORT

Rookie quarterback Cody Kessler will make his third straight start against the Patriots with veteran Josh McCown still sidelined with a broken left collarbone. Robert Griffin III, who opened the year as the starter, will have the broken coracoid bone in his left shoulder re-evaluated this week, which will likely determine if he needs season-ending surgery.
Tight end Randall Telfer suffered a high right ankle sprain when running back Isaiah Crowell slipped and rolled into the back of his leg. Telfer returned to finish the game but is expected to miss at least a month. “You’re an athlete, you always want to play,” Telfer said. “But it’s the nature of the game, so I’m just going to attack the rehab as hard as I attack the games.” Jackson and tight end Gary Barnidge said Telfer was coming into his own as a blocker.
Jackson hopes to get back rookie defensive end Carl Nassib (broken hand) this week after he missed a pair of games.
Safety Ibraheim Campbell (hamstring) could also return after missing two games.

SO UNBELIEVABLE
Receiver Terrelle Pryor pleaded with officials Sunday that running back Duke Johnson had recovered his own fumble in the fourth quarter, but possession was given to Washington. The call stood after the automatic replay review showed “nothing definitive,” according to a league spokesman.
“I can’t believe it,” Pryor said. “I think they thought the ball was still in the pile and me and Duke were tapping the refs and saying, ‘We got the ball right here.’ I don’t know.”
The ball came out of Johnson’s hands, a pair of Washington players dived on the ground and line judge Sarah Thomas immediately ruled it was Washington’s ball. But replays showed Johnson quickly popped out of the pile holding the ball.
“Gosh. Well, it doesn’t matter what I think,” Jackson said. “Obviously, we will turn that in and then the league will make their determination. It seemed like a bang-bang play. It was a fumble and then, boom, we had the ball, but that is not the way they judged it so we have to go with their decision.”
GOOD AND BAD
Pryor’s first receiving touchdown in the NFL was followed by a 15-yard penalty for an illegal celebration, as he used the ball as a prop. He paid tribute to Cavaliers superstar LeBron James by imitating his pregame chalk throw.
“I was juiced up,” Pryor said. “That’s point-blank, period. I apologize to my teammates, but juices were flowing.”
He said he had “no clue” the ball couldn’t be used as a prop.
Pryor had four catches for 42 yards, including the 9-yard touchdown, in the first half against All-Pro cornerback Josh Norman, then had one catch for 4 yards in the second half. He had a drop, and a pass intended for him was intercepted by Norman.
Norman said he went into “his dark place and shut down” Pryor, but Pryor said Norman quit playing man-to-man coverage.
“The guy’s a great player,” Pryor said. “First half, he’s press cover. Second half, he’s playing off coverage in zone. So that’s all I’ll say.”
NO CHANGE
Receiver Josh Gordon remains on the Browns’ reserve/suspended by commissioner list pending further notice, a league spokesman told The Chronicle-Telegram.
Gordon was scheduled to come off the list Monday after serving a four-game suspension to open the season, but he left the team and checked himself into a rehab facility late last week. Cleveland.com reported he went to rehab for an alcohol problem.
The Browns plan to part ways with Gordon after his latest setback — he’s been suspended for 31 of the last 36 games — but there is no need to make a move while he remains on the suspended list.
GOOD RIDDANCE
The Browns released outside linebacker Armonty Bryant on Monday morning as his four-game suspension for performance-enhancing substances ended.
Bryant could face another suspension from the league after pleading guilty to a misdemeanor drug charge in July following an arrest Christmas morning. The case is still under review by the league.
Bryant, 26, practiced in training camp and played in the preseason. He was a seventh-round draft choice in 2013, played in 31 games and totaled 71 tackles, 8.5 sacks, two forced fumbles and a fumble recovery.
HE’S BACK
If the Browns’ 0-4 start wasn’t bad enough, they host the Patriots in quarterback Tom Brady’s return from a four-game suspension for his role in Deflategate.
“Not fun at all,” Jackson said. “He is a tremendous football player and competitor, and he will be chomping at the bit.”
Pryor expects Brady to receive a lot of attention.
“It’ll be a circus,” he said. “I know that from a standpoint of the media. But he’s earned that. He’s one of the greatest quarterbacks to play the game, point-blank, period.”
Contact Scott Petrak at 329-7253 or [email protected] Like him on Facebook and follow him @scottpetrak on Twitter.