Browns trying to battle through frustration of 0-4 start, difficult losses 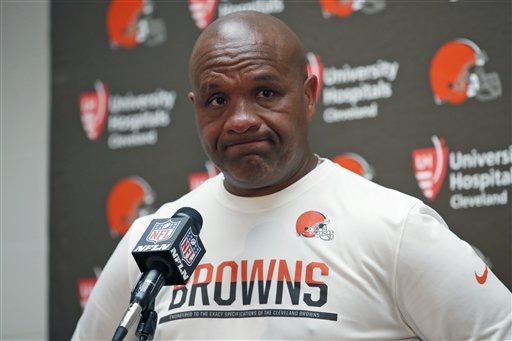 BEREA — Coach Hue Jackson didn’t envision his Browns tenure starting like this.
At 0-4, the Browns are the NFL’s only winless team. They have blown three straight second-half leads, each in a different self-destructive manner. The young roster has been riddled with injuries, as eight starters have missed at least a game.
“Obviously not in the position that I thought we would be in,” coach Hue Jackson said Monday. “We understand the hole we have dug ourselves, but we know how to get out of it. We just have to keep working at it and continue to improve.”
Jackson sets the tone for the organization and is determined to keep it positive. So even in the moments after the excruciating defeats, he’s straightened his back and talked about a brighter future.
Receiver Terrelle Pryor can’t control his emotions as well. He refused to talk to reporters Sunday after the 31-20 loss to Washington and is bewildered by the string of heartbreaking defeats.
“It’s like nothing can go right,” he said. “But I think that’s times where we just got to push harder and just play better.
“It’s crazy, man. Geesh. We’re battling our butts off every game. I don’t know if it’s us not being able to catch a break, I don’t know what it is. This is a very good team. I believe we’re going to keep on making strides and we’re going to win games. But it’s crazy how so many times we’re up and we’re in the game and beating them, and then something goes wrong.”
The Browns have 16 rookies and are among the youngest teams in the NFL. The inexperience can be blamed for many of the critical mistakes that have cost them precious victories.
“Over the last three weeks, our guys have been in position to have a chance to win the game,” Jackson said. “That is a good thing, and that is a bad thing. The good thing is our guys are fighting hard and putting themselves in position for a chance to win. The bad part of that is we are doing things that you have to improve at to win in the National Football League.
“Whether it is turnovers or a mistake here or mistake there, those are the things that do get you beat.”
On Sunday at Washington, turnovers were the main culprit. The Browns rallied from a 14-0 first-quarter deficit to lead 20-17 in the third quarter, but committed three straight turnovers to fall behind 31-20.
Second-year fullback Malcolm Johnson started the downward spiral by fumbling his first NFL carry at the Washington 14-yard line. A touchdown would’ve put the Browns up 27-17.
“You could tell they were about to say ‘uncle,’ as Hue Jackson would say,” Pryor said of the Washington defense.
“He gets enough work for me to trust him,” Jackson said of Johnson. “I know there is a lot open to be second-guessed because he plays fullback and so he never carries the ball.
“It was my decision. I handed him the ball. We fumbled it. It turned the game, but I don’t think that one play lost the game for us.”
The week before in the overtime loss to the Dolphins, three missed field goals by new kicker Cody Parkey doomed the Browns. Against Baltimore in Week 2, a blocked extra point returned for two points started the giant shift in momentum.
“What’s crazy about the league is all it takes is two, three plays and the game’s changed,” Pryor said. “That’s all that happened to us. We’ve got to do better. I don’t think it’s effort. I just think it’s we’ve got to come together even more and get after it.”
Jackson believes getting over the hump will require better play in critical moments.
“Do intelligent things that good football teams do to give themselves a chance to win. And players making plays in those situations,” he said. “But there is no question in my mind it is going to happen. When it is going to happen, I don’t know, but I know it is going to happen. I feel good about that.”
Pro Bowl tight end Gary Barnidge said landing the elusive first win will be vital for the growth of the young roster.
“Once we finish one of these games, it is really going to show everybody on the team that we can do this,” he said. “We have already shown that we can stay with any team in the league and we can do it week in week out. Once we finish one of these, everybody is really going to see it happen, and I think it is really going to buy in then.”
Jackson admitted it’s been tougher than he thought balancing his pleasure in the progress with the team’s position at the bottom of the standings.
“I’m never going to change from the day I came here. I expect to win,” he said. “The last three games I would hope showed you that I expect to win because this team is playing with the opportunity to win. We just have to finish those games.”
Contact Scott Petrak at 329-7253 or [email protected] Like him on Facebook and follow him @scottpetrak on Twitter.