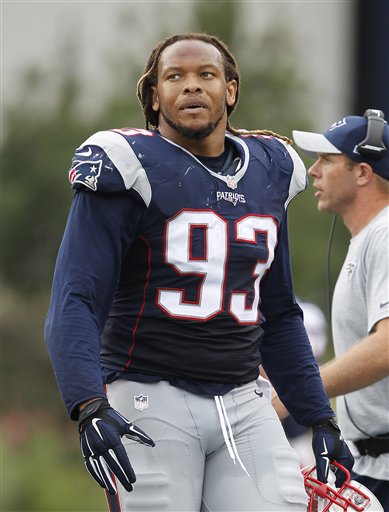 BEREA – Joe Thomas sounded more like a politician than a Pro Bowl left tackle Wednesday.
“Any time a new staff comes in basically they wipe out the middle class,” he said.
Thomas was discussing the loss of defensive end/outside linebacker Jabaal Sheard to the New England Patriots in 2015. Sheard leads the Patriots with three sacks and has 11 tackles and two passes defensed.
“Certainly that’s one of the frustrations that I’ve had over the years and that’s the problem when you constantly are hitting the reset button is guys that are really good players like that end up falling through the cracks or going to other teams,” Thomas said. “(The new regimes) keep a couple of your superstars and then they want everyone else being a rookie so that they can try to develop them. And when you keep doing that over and over again, you really lose all your middle class on your team.
“And so guys like Buster Skrine, Jabaal Sheard, D’Qwell Jackson, Jordan Cameron, Travis Benjamin, those are the guys that they disappeared, even though those were the guys that you drafted them, spent the time developing them and right when they’re hitting stride in the peaks of their career, they end up going somewhere else and having great success for somebody else.”
Sheard is the starting right end, so he and Thomas will have plenty of time to renew acquaintances.
“Jabaal’s playing great,” Thomas said. “From the first game that he got to New England he’s played exceptionally well. I think he’s got (three) sacks, he’s a force in the run game and I’m sure New England’s very happy that they got him.”
Sheard was a second-round pick in 2011 when Tom Heckert was general manager. He was allowed to leave in free agency when Ray Farmer was the GM.
“As you know, Jabaal was very productive in Cleveland,” Patriots coach Bill Belichick said on a conference call with Browns media. “He’s a powerful player that can power rush, work inside, also work the edge. We’ve used him both inside and outside. He’s been productive for us in a lot of different areas.
“A good kid, works hard, smart, very physically strong for his size, with good instincts, good awareness. He’s a good football player.”
MISSED IT
The controversial Duke Johnson fumble Sunday in the loss to Washington remained a topic of conversation. Johnson quickly emerged from the pile with the ball raised above his head, but line judge Sarah Thomas gave possession to Washington.
“Nobody ever touched the ball but me,” Johnson said.
Joe Thomas was on the turf fighting for a ball that wasn’t there. He’s done research and believes he knows what happened.
“Basically the ball hit the ground and bounced right back to Duke,” Thomas said. “(Washington’s) Will Compton was acting like he had the ball. And then Josh Norman jumps on top of him to like cradle him so like nobody else could get on top of him.
“I never saw the football. I just saw a guy that was acting like he had the football, which is exactly what the official saw — somebody acting like they had the football — so she gave the ball to the person that was acting like they had the football. I think if she would’ve just looked over and saw Duke with the ball, it would’ve been a different story, but at that point when you’re an official, you’ve just got to go with whatever you’re going with and just lie til you die.”
NFL senior vice president of officiating Dean Blandino admitted Johnson holding the ball before Thomas pointed toward Washington was a “bad visual.” But he explained the call and why it withstood replay review.
“We’ve already ruled possession,” he said on NFL Network. “We’re not digging at that point (to see who has the ball).
“There’s never an angle that shows Johnson recovering the football on the ground and the player coming out of the pile with it is not sufficient evidence because as we all know the ball can change hands in the pile.”
SETTLING ON A CENTER
John Greco practiced at center and Jackson said he’d likely remain there for the game vs. the Patriots. Alvin Bailey is expected to start at right guard after he was benched against Washington following being charged with OVI.
The Browns have been looking for alternatives at center after injuries to Cameron Erving and Austin Reiter. Erving will miss his third game Sunday with a bruised lung and there’s been no timetable given for a return. Reiter is out for the season with a torn anterior cruciate ligament.
The Browns worked out former Patriots center Bryan Stork early in the week but elected not to sign him. They promoted undrafted rookie Anthony Fabiano (6-foot-3, 303 pounds) from the practice squad Wednesday, and the Harvard alum will likely back up Greco.
Reiter hasn’t been placed on injured reserve yet, so another roster addition is coming this week.
INJURY REPORT

Rookie defensive end Carl Nassib returned to practice in a limited capacity after missing two games with a broken hand. He’s expected to play with a cast.
Running back Isaiah Crowell (hamstring) and cornerbacks Joe Haden (groin/thigh) and Tramon Williams (shoulder) were also limited. Haden missed a game with a groin injury but returned Sunday in the loss to Washington. Williams didn’t play vs. Washington. “My thigh got a little bruised, but it just comes with the territory,” Haden said. “I was just happy I was able to get out there and play. My groin wasn’t all the way ready, but it’s getting a whole lot better.”
Receiver Corey Coleman (hand), tight ends Randall Telfer (ankle) and Seth DeValve (knee), quarterback Josh McCown (broken collarbone) and Erving didn’t practice.
For the Patriots, running back Brandon Bolden (knee), linebacker Shea McClellin (concussion) and defensive tackle Vincent Valentine (back) didn’t practice.
Running back LeGarrette Blount (hip), quarterbacks Jimmy Garoppolo (right shoulder) and Jacoby Brissett (right thumb) and tight end Rob Gronkowski (hamstring) were among those limited.

ELYRIAN HEADS EAST
Offensive lineman Chase Farris signed to the Patriots’ practice squad. He’s an Elyria High School and Ohio State graduate.
Farris (6-4, 295) signed with the Lions as an undrafted rookie in May and was cut Aug. 29. He spent a couple of weeks on their practice squad before being released Sept. 21.
EXTRA POINTS

“Very humbled & appreciative to play in my 268th game this week,” tweeted 49ers kicker Phil Dawson, who was with the Browns from 1999-2012. “The same # of games all time great & Mr Cleveland Brown, Lou the toe Groza.”
Defensive lineman Gabe Wright was cut to make room for Fabiano.
Tight end E.J. Bibbs and offensive lineman Michael Liedtke were signed to the practice squad.

Browns coach Hue Jackson calls New England's Bill Belichick the greatest, but concedes nothing in Sunday's "chess match"
Browns RB Isaiah Crowell with great start on field after handling controversy off of it