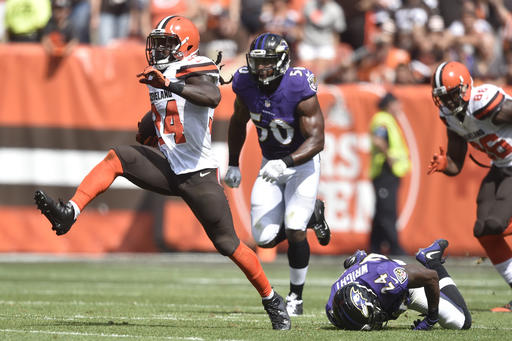 BEREA — Isaiah Crowell has come a long way. In a lot of ways.
Crowell leads the NFL with 6.4 yards a carry and ranks second with 386 rushing yards, trailing only the 412 for Cowboys rookie and Ohio State alumnus Ezekiel Elliott.
In his first two seasons after being undrafted out of Alabama State, Crowell flashed the traits of a big-time running back, rushing for eight touchdowns as a rookie and 706 yards last year. But he’s been a different player through four games this season, consistently showing an impressive combination of power, speed and elusiveness.
He said he lost 7 or 8 pounds and feels more comfortable.
“But I feel like it’s really more opportunities and I feel like I could’ve been doing this if I had opportunities like I have now,” Crowell said Thursday.
New coach Hue Jackson spotted special qualities in Crowell on film and planned for him to be a focus of the offense.
“I saw it. I’m not surprised by anything he is doing,” Jackson said. “He is a tremendous football player, and he is only going to get better.”
But even Jackson questioned Crowell’s future after his controversial Instagram post in July of an illustration of a police officer being stabbed in the neck.
Crowell, 23, quickly deleted the post, but the damage had been done. Many angry fans called for the Browns to cut him, while Crowell apologized and tried to make amends.
“It was concerning,” Jackson said. “The player chased me to let me know that he had made a huge mistake in judgment. I think he has owned up to that, he has taken responsibility for it and he has done the right thing since then.”
Crowell reached out to Cleveland police, attended the funeral of a Dallas officer killed in the line of duty and promised to donate his first game check of more than $35,000 to the Dallas Fallen Officer Foundation. He sent the check last month.
“I wanted to be a man of my word and that’s really what it was,” he said.
The Browns kept Crowell, and he sounds much more mature after the ordeal.
“I was more worried about making it right, basically,” he said. “It gave me a different outlook on how people are and police and things of that sort. I know all police aren’t bad, there’s great police out there and I appreciate everything that they do.”
The terrific start has emphatically answered whether the stress from the self-inflicted turmoil would hurt his performance. He’s been buoyed by Jackson’s support, scheme and game plans.
“Really I didn’t feel like it would affect me on the field as much as off the field, just because I’ve been through a different situation my whole life and I’ve been through a lot of stuff and I’ve gotten through it,” Crowell said. “So I knew this would just be something that I have to get through, I have to make right.”
Crowell is 5-foot-11, 225 pounds and has always been more bruiser than ballerina. But his repertoire has grown this season as he’s taken turns making defenders miss and running through them.
He’s forced 12 missed tackles on 61 carries, according to profootballfocus.com. He registered 30 missed tackles on 333 carries in his first two years. He leads the league with 4.54 yards per carry after contact, up from 2.1 for his career.
He insists he isn’t any quicker and it’s all about opportunity.
“I feel like I’m in a good rhythm in the game,” Crowell said.
The rhythm has gotten him into the secondary. He’s tied for first in the NFL with 11 runs of at least 10 yards, including an NFL-long 85-yard touchdown against Baltimore.
He rushed for 112 yards and a touchdown, his third, last week against Washington, and his 386 yards through four games are the most for a Browns player since Jim Brown’s 476 in 1975. He’s the first to rush for 60 yards in each of the first four games since Earnest Byner in 1985.
Crowell’s on pace for 1,544 yards and 12 touchdowns and had to adjust his goals.
“I said I wanted 1,000 yards, around 10 touchdowns, but Hue said, ‘Why not more?’” he said. “So I’m with him.”
Another number Crowell would like to see rise is his carries. He’s had 12, 18, 15 and 15 for a total of 60, as he shares the workload with Duke Johnson (25 carries, 156 yards, 6.24 average).
Elliott has 94 rushes and New England’s LeGarrette Blount is third with 352 yards on 88 carries.
“Oh, yeah, I feel like it’s in Hue to give a back 20 carries,” Crowell said. “But I’m not really focused on that. I’m just really focused on trying to help my team win. If 20 carries helps my team win, that’s fine with me.”
The matchup Sunday vs. the Patriots presents a challenge. The Patriots rank 15th against the run, allowing 101.3 yards per game, and the Browns are convinced coach Bill Belichick will make stopping Crowell his top priority.
“I know that they’re going to try to make us one-dimensional, and I feel like if they make us one-dimensional it’ll be hard for us,” Crowell said. “So I know we’ve got to go out there and just do what we’ve been doing every week and just keep on pounding the ball.”
Contact Scott Petrak at 329-7253 or [email protected] Like him on Facebook and follow him @scottpetrak on Twitter.