Commentary: Thorough thumping shows Browns how far they have to go 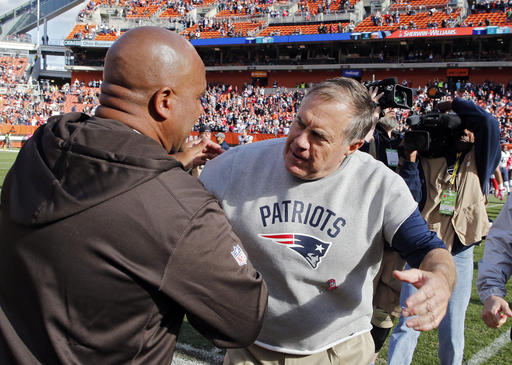 The Browns knew the New England Patriots would attempt to crush them physically and mentally. They also were certain Tom Brady would make a strong statement in his season debut.
And it was a given Bill Belichick would create a game plan that was going to keep them off-balance from the opening kickoff Sunday.
Yet, there wasn’t a darn thing Cleveland could do about any of it.
Brady threw for 406 yards and three touchdowns — and Belichick dominated the strategic battle — as the Patriots posted a 33-13 victory over the winless Browns at FirstEnergy Stadium.
“Our expectation was to come out here, perform as a team, and win,” said Belichick, who became the fourth coach in NFL history with 250 career victories. “What else would we come out here for? All of our guys made good effort plays and I thought we competed well.”
Injury-plagued, talent-deficient Cleveland also competed to the best of its abilities, as did coach Hue Jackson, on the gorgeous fall afternoon.
Effort, however, means very little when a team is completely outclassed.
Tackle Joe Thomas and guard Joel Bitonio — and perhaps cornerback Joe Haden — are the only Browns who would crack New England’s starting lineup. It’s not a stretch, either, to say there are a half-dozen Cleveland players who couldn’t make any other NFL roster.
“I think that is the best team we have played this season, so you have a different barometer to judge everything by,” Jackson said. “Obviously, we have a ways to go. Right now, we are not close.
“When you play an opponent that is this good, these are the games you will point to where we will make our biggest growth from.”
If Jackson truly believes that, more power to him. He’s going to need every bit of positivity inside his brain to stay sane for the remaining 11 games.
Wide receiver Terrelle Pryor, who steadfastly supports his coach, was taken aback when asked if the Browns could learn from the blowout loss.
“I don’t know, I guess,” he said slowly. “I don’t know what, but I guess so.”
Fortunately for Jackson, Cleveland’s handful of veteran leaders remain eager to spread his message.
Wide receiver Andrew Hawkins adamantly said, “Guys aren’t giving up. I know that doesn’t always equate to wins, but it’s a foundation. I don’t think it’s a matter of if, I think it’s when we become successful.”
Haden made similar comments, speaking highly of his younger teammates’ preparation and work ethic. If he sees any slippage, he will call them out for it.
“I’m not changing, Joe (Thomas) is not changing, the leaders on the team aren’t changing,” Haden said. “They’ve got to believe in it. We’ve got to come in here and we’ve got to figure out how to get a win.”
Following the Patriots’ template — from ownership on down — is sound advice. Their winning percentage of .686 since 1994 is the second best in North American pro sports.
Conversely, the Browns have a 47-102 record since Thomas was drafted and are 28-73 since Haden came to Cleveland.
“I’m very envious of that Patriots team and their organization because of what they are, it was right there for all of us to see,” Jackson said. “Someday, we are going to have that here. That is the plan. We are not going to get frustrated by this. We are going to learn from this, grow from it, and get better.”
Contact Brian Dulik at 329-7135 or [email protected] Follow him @BrianDulik on Twitter.

Browns sing Tom Brady's praises, excited for challenge, know it would be "game-changer" if they could beat him in his return
Tom Brady doesn't miss a step: Patriots QB dazzles in season debut against Browns