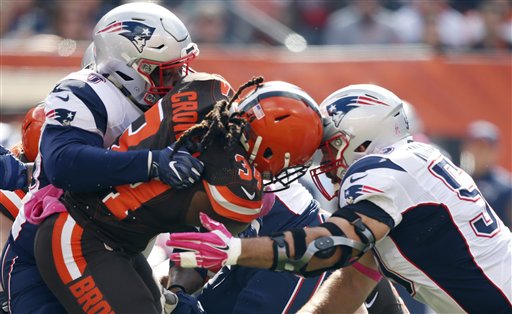 CLEVELAND — Isaiah Crowell and Duke Johnson talked a good game all week, but were nowhere to be found Sunday afternoon.
The New England Patriots limited the duo to 23 rushing yards on 17 carries in rolling to a 33-13 rout of the Browns at FirstEnergy Stadium.
Cleveland entered the game leading the NFL with 597 rushing yards and a 5.7-yard average per attempt. Crowell ranked first individually in the league at 6.4 and Johnson was second at 6.2.
Against the Patriots, Crowell gained 22 yards on 13 carries and Johnson had 3 feet on four rushes. The Browns ran the football 22 times in all for 27 yards — the eighth-lowest total in the Patriots’ NFL history.
“They were going to make sure they stopped us, so they loaded up to stop it,” Cleveland coach Hue Jackson said. “They slowed us down like no team has this season, so we have to go back to the drawing board. I take responsibility for that. We have to get that part better, and we will.”
While Crowell and Johnson were essentially invisible on the field, they were ghosts in the locker room. Both exited through a side door before the media was permitted inside, leaving their teammates to discuss the dismal day.
“New England outplayed us in the run game for sure,” guard Joel Bitonio said. “It’s unfortunate because we wanted to run the ball, but they did a good job stopping it. They came out with a 6-1 look on us — kind of a blanket front — but we have to be better and win more one-on-one blocks.”
According to center John Greco, knowing the Patriots were going to focus on the run game and being unable to find ways to exploit that was exasperating.
“We know we’re not going to sneak up on teams anymore by running the ball,” Greco said. “Every team is going to try to stop our strength. We need to execute better.
“It’s not like we have one or two games left. We still have a majority of the season left to play, so we need to get back to doing what we do well.”
Hawk talk
Browns wide receiver Andrew Hawkins notched his first touchdown since Nov. 16, 2014, on an 11-yard reception from Cody Kessler. It was his seventh career receiving score.
Hawkins also was on the receiving end of a punch from Patriots cornerback Cyrus Jones in the third quarter. The rookie and “Hawk” became entangled near the sideline following a Terrelle Pryor catch.
“It was deemed that he threw a punch,” referee Bill Vinovich said. “Punch and connect, you are ejected.”
Hawkins said he was surprised to find himself in an altercation, given New England held a 30-7 lead at the time.
“It was a football play, and he got upset and went off the deep end,” said Hawkins, who had four catches for 56 yards. “I don’t want to put my team in a bad position, so I’m not going to fight back and start throwing blows and whatever. I’m glad the refs caught it, and that’s what happens.”
Out of action

Tight end Connor Hamlett caught a 17-yard touchdown pass from Whitehurst in his NFL debut. The Oregon State alum spent the first four weeks of the season on Cleveland’s practice squad.
Pro Bowl tight end Gary Barnidge and wide receiver Terrelle Pryor shared team-high honors with five receptions.
Linebacker Christian Kirksey registered a career-high 16 tackles, while defensive end Jamie Meder had his first sack of the season.
Cornerback Tracy Howard gained a team season-best 63 yards on four kickoff returns.
Cleveland has been outscored 148-87 on the year, including 73-23 after halftime. It has allowed at least 25 points in all five games.

An announced sellout crowd of 67,431 was on hand, matching the official attendance from Cleveland’s first home game three weeks ago.
The kickoff conditions were 58 degrees under sunny skies. The Browns wore their all-brown uniforms, while the Patriots donned white tops and blue pants.
New England wide receiver Julian Edelman — a Kent State product — was the first player out of the tunnel. He sprinted directly toward the Dawg Pound to taunt the fans.
UFC heavyweight champion Stipe Miocic led the crowd in “Here we go, Brownies” chants.
Cleveland leads the all-time series 12-11, but New England is 3-2 at FirstEnergy Stadium.