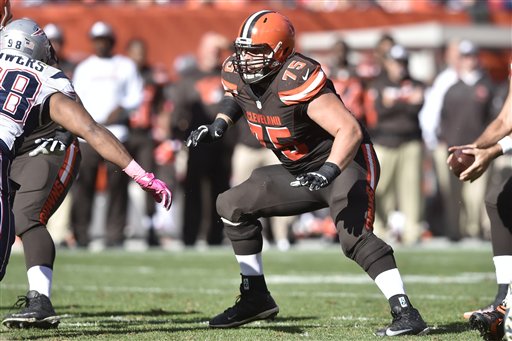 BEREA — Another day, another significant injury for the Browns.
Left guard Joel Bitonio will be sidelined for an extended period of time after suffering a midfoot sprain Sunday during Cleveland’s 33-13 home loss to the New England Patriots.
The 6-foot-4, 305-pounder completed the game and showed no signs of being hobbled in the locker room, but was in great discomfort when the team returned to work this week.
“Joel is going to miss some time, and that’s a tough blow to our team,” coach Hue Jackson said Wednesday. “I know Joel, he’s one tough guy, so more than likely he did play with it until the end of the game. I wouldn’t know yet if (surgery) is an option, but anything is possible.”
Bitonio — a second-round selection by Cleveland in the 2014 NFL Draft — is considered one of the best players on the team.
The Nevada product has played in 31 career games, all starts, and is blossoming into a leader after the Browns shed many veterans in the offseason.
“Obviously, Joel is one of the best guards in the NFL, in my opinion,” left tackle Joe Thomas said. “He has been playing really well, so to lose that type of guy, he is tough to replace.”
Cleveland has already lost center Austin Reiter to a season-ending torn knee ligament and has been without center Cameron Erving since Sept. 18 with a bruised lung and damaged ribs.
Erving could return to action Sunday, when the winless Browns play at Tennessee, which would allow John Greco to shift back to his natural spot at right guard. If that occurs, Alvin Bailey would move across the line to left guard.
“You obviously don’t want any injuries, but you understand they are part of the game,” said Thomas, who has not missed a snap in his 10-year career. “Depending on when Cam can come back, I think we will be in good position because we have John and Alvin, who have both stepped up this year.”
If Erving is unable to go for the fourth game in a row, Greco will remain at center and Bailey is likely to stay at right guard. That would press newcomer Jonathan Cooper into service at left guard, though he and Bailey could work at either position.
Cooper was the No. 7 overall pick by Arizona in 2013, but has only made 11 pro starts because of injuries. He was claimed off waivers Monday after being cut by the Patriots.
“I have to see how fast Cooper can grasp things and we’ll see if we can get him up to speed,” Jackson said. “If he can, great. If he can’t, then we’ll move onto another plan.”
The final option is having practice squad center Anthony Fabiano make his NFL debut. The 6-3, 303-pound rookie from Harvard was active, but did not play against the Patriots and was subsequently released and re-signed to the practice squad.
“We’re just grateful for the guys that are left standing,” Jackson said. “We’ll do whatever we have to do. We’ll put the best 11 guys out there against Tennessee and be ready to play.”
Selective morality
Disgraced former Baylor coach Art Briles was Jackson’s guest at practice, dressed in Browns gear while talking with players. He also spent time with the team during training camp.
Briles lost his job with the Bears amidst widespread allegations of sexual assaults by his players, but has been given a clean slate in Cleveland.
“What happened at Baylor is at Baylor,” Jackson said. “He is a tremendous offensive-minded football coach. I think everybody deserves an opportunity to kind of do what they do. I respect everybody’s feelings and I don’t condone anything or not, but that is not for me to judge.”
Jackson defended his decision to invite Briles back to Berea, saying he had discussed the matter with the Browns’ upper management team. He also insisted that high character remains a priority “within our organization.”
“Nothing happened here, so I have to be able to judge my relationship with him by what he is doing for me now,” Jackson said. “This happened at a different time — and not here — so I can’t judge that. I understand everybody has an opinion about it, but I have to be able to judge my relationship with him by what he is doing for me now.”
Injury update
Not practicing for the Browns were wide receiver Corey Coleman (hand), defensive end Xavier Cooper (shoulder), tight ends Randall Telfer (ankle) and Seth DeValve (knee), Thomas (knee) and Bitonio (foot).
First-round pick Coleman is scheduled to undergo X-rays in the next few days to determine if his fracture has healed.
“I know he’s tired of running on the side every day,” Jackson said, chuckling.
The coach also downplayed Thomas’ ailment, pointing out that he is typically given every Wednesday off to rest.
“If I know Joe Thomas, he’ll be ready to play Sunday,” he said.
Quarterbacks Cody Kessler (chest, ribs) and Josh McCown (left shoulder), tight end Gary Barnidge (forearm, hip), cornerback Tramon Williams (shoulder) and Erving (bruised lung, ribs) were limited. Defensive end Carl Nassib (hand) was a full participant.
Quote of the day
“Do you guys want me to say, ‘I give,’ or ‘I quit,’ about our injuries? That’s not going to happen. I’m also not going to sit up here and tell you, ‘Oh my God, it’s great,’ (because) it is not. At the same time, what do you want me to do?” — Jackson.
Contact Brian Dulik at [email protected] Follow him @BrianDulik on Twitter.