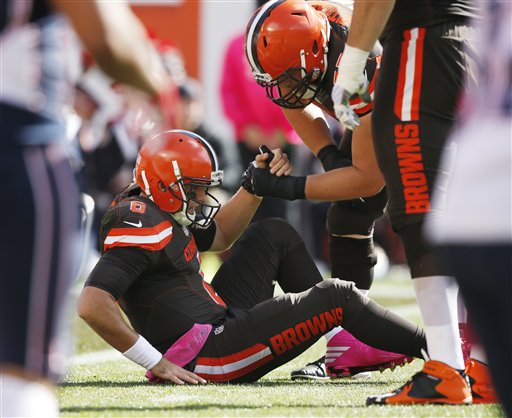 BEREA — Rookie quarterback Cody Kessler had already impressed teammates with his preparation, poise and performance in his first three NFL starts.
Add toughness to the list.
Kessler will make his fourth straight start Sunday in Tennessee, coach Hue Jackson announced Thursday. Kessler has sufficiently recovered from chest and rib injuries that knocked him out of last week’s 33-13 loss to the New England Patriots in the first quarter.
“It’s awesome,” right guard John Greco said. “That says a lot about his character, toughness and leadership really.
“I am really impressed with Cody’s ability to come back in. You don’t hear him complain and you don’t hear him making any excuses. It’s just like last week and just like the previous week, when he’s been in there he’s a leader.”
Kessler was in too much pain to go back in the game Sunday but returned to practice Wednesday. He was a full participant Thursday and said he’s feeling better by the day.
“Cody looked good,” Jackson said. “I know Cody is ready to play.”
Kessler said it’s a relief he’s able to continue as the starter.
“Definitely. That was my mindset the whole time,” he said. “Obviously last week was unfortunate. The game got cut a little short for me, so it’s exciting to get back out there.”
Josh McCown, 37, returned to practice Wednesday after breaking his left collarbone Sept. 18 against the Ravens. He looked better throwing Thursday, but Jackson said he didn’t know yet if McCown could serve as the backup against the Titans.
The Browns have already had four quarterbacks injured in five games and will send a compromised offensive line – left guard Joel Bitonio is out, left tackle Joe Thomas isn’t 100 percent and center Cameron Erving missed the last three games with a bruised lung – against a Tennessee defense that had six sacks last week.
If McCown can’t play, Jackson will get creative.
“A combination of whatever we need to do,” he said.
That likely means rookie Kevin Hogan, who was promoted from the practice squad Tuesday, and receiver Terrelle Pryor.
But Jackson doesn’t expect Kessler to be limited.
“No, I think he is fine,” Jackson said.
Kessler was anything but fine when Patriots linebacker Dont’a Hightower came free through the middle of the line and smashed Kessler so hard his upper body made a “weird” noise. The Browns expected Hightower to cover running back Duke Johnson, but he blitzed instead, leaving Kessler exposed.
The pain wasn’t gone Thursday and Kessler continued with two or three daily treatments.
“It’s more, I guess, manageable,” he said. “It’s easier to throw now and it’s starting to go away each day. It’s getting better and better.”
Kessler said he proved to himself in practice he could throw like he needed to, even though the motion can be painful.
“It kind of reminds you it’s there a little bit on some throws,” he said. “But, no, it’s been fun.”
Kessler and the Browns are still looking for their first wins, but he’s been a pleasant surprise after being forced into action in Week 3 after injuries to Robert Griffin III and McCown. Kessler has completed 66.7 percent for 529 yards with two touchdowns, an interception and an 87.9 rating.
He matched New England’s Tom Brady with a long touchdown drive, capped by an 11-yard throw to Andrew Hawkins, before getting hurt.
“He is getting better. He is understanding our system, how to play within our system, where to deliver the ball to,” Jackson said. “He has started to play in a rhythm that runs our offense and a rhythm that works for him. He has done a good job, obviously, but still so early in the season and have a long way to go.”
Kessler said he’s had to adjust to the speed of the NFL game with its great players, but his biggest takeaway from three starts is how difficult it is to walk away with a victory. The Browns were close in his first two starts but blew second-half leads.
“It’s finishing games,” he said. “It’s tough to win and you’ve got to finish games and one mistake here and there in the NFL can really hurt you and can decide a game. But for me, the best thing is just improving and getting more comfortable each week and I hope to continue to do that this week against the Titans.”
Contact Scott Petrak at 329-7253 or [email protected] Like him on Facebook and follow him @scottpetrak on Twitter.