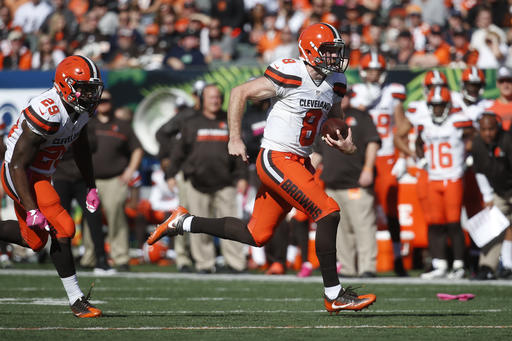 CINCINNATI — Rookie quarterback Kevin Hogan seeing his first NFL action was part of the plan.
Hogan taking every snap for the last 2½ quarters wasn’t.
But nothing’s gone according to script for coach Hue Jackson and the Browns this year, and that’s especially true at quarterback.
Rookie Cody Kessler left the 31-17 loss to the Bengals on Sunday with 7:27 remaining in the second quarter with a concussion. He was being tackled by defensive end Carlos Dunlap and collided with defensive tackle Domata Peko.
“It’s disappointing — tough sport,” Jackson said. “He’s trying to make plays and battling as hard as he can, and these hits — these quarterbacks only have so many of these hits in their body, you know? Pretty soon, guys don’t get up all the time, and that’s what’s been happening.
“It’s unfortunate. It’s just been happening way too much, so on we go.”
Hogan was the sixth quarterback, including receiver Terrelle Pryor, for the Browns in seven games. The 1976 Tampa Bay Buccaneers, who went 0-14, were the last team in a non-strike season to have six players throw passes in the first seven weeks.
Robert Griffin III broke a bone in his left shoulder in the opener. Josh McCown broke his left collarbone Week 2. Kessler left the Patriots game Oct. 9 with chest and rib injuries. Charlie Whitehurst was waived after injuring a knee against the Patriots in his only action.
“It’s tough. I’ve never been through a season I think that’s gone through so many starting quarterbacks,” left tackle Joe Thomas said.
And Thomas has played with most of the 26 starting quarterbacks the Browns have used since returning in 1999.
Kessler, a third-round pick, started his fifth straight game and had made consistent progress. He threw for a career-high 336 yards last week against Tennessee and went 9-for-11 for 82 yards Sunday.
“It’s real disappointing because everyone wants to see what type of player Cody Kessler can be, so they want to see as many reps as they can with him in there and he was playing very well,” Thomas said. “So it was tough to see him go down, but hopefully it’s not too serious and he’s able to come back quickly.”
Kessler completed a backhanded shovel to tight end Gary Barnidge for 11 yards, but stayed down before going to a knee and eventually walking slowly to the sideline. He was checked by the medical staff, then jogged into the locker room for further evaluation.
He was diagnosed with a concussion, didn’t return and entered the league’s protocol. He is unlikely to be ready for next week against the Jets (2-5).
The Browns (0-7) would like to turn to McCown and there’s a chance they can, but he had yet to be cleared. He practiced the last two weeks, but the bone wasn’t healed sufficiently for him to suit up and risk taking another hit.
If Kessler and McCown aren’t available, the Browns would have to sign at least one more quarterback. Hogan ended the game as the only healthy one on the roster.
“He was playing good, and like I said, part of this thing is availability — you’ve got to be out there,” Jackson said of Kessler. “You have to find a way to stay out there, and that’s tough because he’s trying his tail off. You’re taking these hits at risk of not being out there.
“He made a helluva play on that particular play to Barnidge, and then ‘bam!’ It’s unfortunate, but I know our guys are trying hard. The luck’s just not swinging our way. We’re not getting those breaks right now.”
Hogan was a fifth-round pick of the Chiefs, was cut after the preseason and spent the first five weeks of the season on Cleveland’s practice squad before being promoted before the Oct. 16 game against the Titans.
Jackson designed a game plan with Hogan substituting for Kessler and running the zone read as a change of pace. It worked, as Hogan ran for 7, 15 and 15 yards before Kessler was hurt.
“I’m trying to find a way to win,” Jackson said of the new wrinkle. “I’m trying to find a way to move the ball and score touchdowns on offense. I’m not opposed to doing anything if it means we’ve got a chance, but I just saw an opportunity for him to come in and make plays and he did that.”
Hogan continued to run after he took over full time and finished with 104 yards on seven rushes, including a 28-yard touchdown to open the second half and cut the deficit to 21-17. The 104 yards were the second-most in a game by a Browns quarterback, trailing Johnny Manziel’s 108 last year.
He scrambled left, made a good move in the open field, cut back nicely, dived and stretched the ball across the goal line as he was hit by two defenders. It was the longest touchdown run by a quarterback in Browns history.
“That’s pretty cool,” Hogan said.
Hogan wasn’t as effective passing. He completed 12 of 24 passes for 100 yards with two interceptions — one tipped — and a 26.4 rating.
But he impressed teammates by stepping in and running the offense.
“Hats off to Hogan who came in there and showed poise and showed fight and showed grit,” receiver Andrew Hawkins said.
“Kevin did an awesome job coming in there,” Thomas said. “To be able to come in and function as efficiently as he did and obviously run the ball as tough as he did was a big boost for the offense.”
Hogan said he felt comfortable and confident.
“Obviously, I hope that Cody makes a speedy recovery — he’s our quarterback and we trust him,” Hogan said. “But I’m going to do everything I can to make sure I’m ready.”
Contact Scott Petrak at 329-7253 or [email protected] Like him on Facebook and follow him @scottpetrak on Twitter.