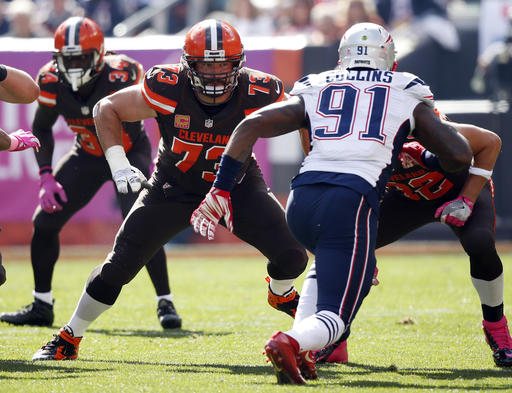 BEREA – As difficult as it is for some people to believe, left tackle Joe Thomas wants to stay with the Browns. So he hopes coach Hue Jackson was telling the truth when he said emphatically Monday the Browns wouldn’t trade the nine-time Pro Bowler.
“It feels good to be loved,” Thomas said Wednesday. “I’m hoping that they stick to their word on that. Obviously I really want to be here. It’s important for me to be part of the turnaround.”
Thomas is a great player on an 0-7 team in full-on rebuilding mode, so it makes sense for teams to inquire about his availability — and for the Browns to consider dealing him for a high draft pick and/or young player. They came close to trading him to the Denver Broncos last year at the deadline.
The deadline this year is Tuesday.
“There’s no surprises in the NFL,” Thomas said. “So you always have to be ready and be able to roll with any punches that you’re given, but I wouldn’t expect to be traded obviously.
“But it wouldn’t be the most shocking thing in the world because that’s the way the NFL goes. We’re commodities in this business and we get traded just like stocks and bonds. So it’s just part of what you have to accept when you become an NFL player.”
Thomas said he won’t stress until the deadline passes because it’s out of his control. But he again made it clear he wants to finish his career with the Browns, who drafted him No. 3 in 2007.
“I’m a goal-setter and a guy that’s very goal-oriented and to me doing the things that you set out to do and that you say you’re going to do is important,” he said. “So when I first got here my goal and my mission is kind of always to make the playoffs and to help be part of turning the Browns into a consistent winner and turning the franchise’s fortunes around.
“We haven’t done that yet, so to me that means that my mission is not yet complete here.”
He’s seen teammates leave and win Super Bowls.
“I want to have it in Cleveland,” Thomas said.
Fellow lineman John Greco is in his sixth year playing with Thomas and doesn’t like the idea of that changing.
“It’d be a little weird, obviously,” he said. “But let’s just hope that we don’t have to go through it.”
TRIBE TOWN
Jackson learned his lesson.
A week after congratulating the Indians on advancing to the World Series but calling manager Terry Francona “Coach Francola,” Jackson didn’t take any chances following the Game 1 win over the Cubs.
“First off, I have to give a shout-out to the Indians,” he said. “What a great win last night.
“I’m not going to pronounce Coach’s name since I butchered it the last time. I’m just going to give him a shout-out. I know that the city’s electric right now. I hope they know that our team is behind them all the way and rooting for them all the time, rooting hard.”
Thomas attended Game 1 on Tuesday.
“The fans were pretty juiced up,” he said. “It was awesome.”
Thomas met Basketball Hall of Famer Shaquille O’Neal, who was in town for the Cavs opener.
“It was cool. I think anybody that grew up playing basketball in the ’90s idolized Shaq,” he said. “It was pretty neat meeting him and seeing somebody that’s bigger than me in person.”
WANNA HAVE A CATCH?
Rookie receiver Corey Coleman, the No. 15 pick, returned to practice after missing five weeks with a broken hand. He ran routes but didn’t catch passes in the 20 minutes open to the media.
He wore a brace on the hand and isn’t expected to play Sunday against the New York Jets.
“More than likely not, but again, you just never know about these things,” Jackson said. “We will see it all as we get closer towards the end of the week.”
Coleman had a near-miss when an assistant coach threw a pass in his direction during individual drills. Coleman pulled his hands back, and the coach was reminded he wasn’t catching.
“He is getting closer,” Jackson said. “He ran around, did some things, had shoulder pads on and doing a little football. It is good just to have him out there running around again and being with his teammates.”
BACK AT IT
Center Cameron Erving practiced fully after sitting out the second half of Sunday’s 31-17 loss to the Bengals with an undisclosed illness. He wouldn’t say if the illness was related to a bruised lung that sidelined him for three games earlier in the year.
“I’m good,” he said.
Erving said he was relieved to return to the field so quickly but wanted to finish the game against the Bengals.
“It’s just disappointing not to be on the field getting reps that I know I need, so that’s the only thing I was thinking about,” he said.
Jackson was glad to have him back.
“He is one of our starting players. It is very encouraging,” he said. “Our medical staff has done a good job. He has, too. He is back out there, and we will continue to monitor where he is, but I think he is doing fine.”
Erving was asked if the medical problems are behind him.
“We’ll see, man,” he said. “All we can do is continue to just go out and play ball and I roll with the punches. Whatever happens, I mean, it happens and I have to deal with it accordingly.”
INJURY REPORT

The Browns will pay tribute to the 1986 AFC Central Division championship team Sunday. Coach Marty Schottenheimer and more than 25 players will be honored for the 30-year anniversary of the franchise’s first trip to the AFC title game that included a double-overtime playoff win vs. the Jets.
Thomas is a partner in two Mission BBQ locations in Ohio, including the Parma restaurant set to open Nov. 7. He catered food for the media and others in the building.
Defensive back Darius Hillary, running back Terrence Magee and defensive lineman Gabe Wright were signed to the practice squad. Offensive lineman Michael Liedtke and running back Terrell Watson were cut from the practice squad.

Browns QB Josh McCown cleared to play, in line to start Sunday vs. Jets as rookie Cody Kessler remains in concussion protocol
Browns rookie WR Corey Coleman eyes return from broken hand next week, plans to pick up where he left off and help team win