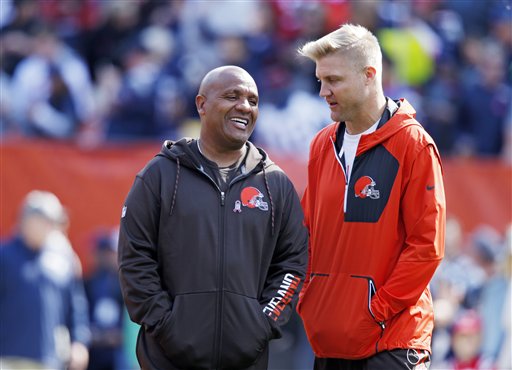 BEREA — The last time quarterback Josh McCown played the New York Jets — last year’s season opener — he left with a concussion after he was spun like a propeller as he dived for the goal line.
The last time he played at all — Sept. 18 against the Ravens — the Browns scored 20 points in the first quarter, but he finished the 25-20 loss with a broken left collarbone.
McCown has been cleared to play this week against the Jets, practiced fully Wednesday and is in line to start. Coach Hue Jackson stopped short of making it official, as he waited to see if rookie Cody Kessler would be released from the concussion protocol. He was injured Sunday in the second quarter of a 31-17 loss to the Bengals.
“We will just kind of see as we go,” Jackson said. “You guys know these things are kind of tricky and it all depends on how the guy responds to light and all that.”
Jackson would probably stick with Kessler for his sixth straight start if he were cleared in time to practice Thursday. If not, it would be too late and McCown would happily return to the huddle.
He didn’t want to leave in the first place.
“As we move along through the week, Coach will make his decision on what he sees best for the team,” McCown said. “My job is to go out and do everything I can in practice to get myself ready. If it moves in that direction, that will be Coach’s decision. Right now, it is just going out and putting good reps together in practice, what feels good.”
McCown, 37, fought through the pain to finish the loss to the Ravens and has been trying to get back in the lineup since. But the medical staff overruled him, including the last two weeks after he returned to practice in a limited capacity.
The final go-ahead followed another X-ray. He’s been waiting six weeks to put the Baltimore game behind him and help deliver the first win of the season for the 0-7 Browns.
“It certainly lingers because it was a ton of good early in that game but didn’t finish the way we wanted it to,” said McCown, who was 20-for-33 for 260 yards with two touchdowns, two interceptions and an 80.4 rating. “We do need to take another step and get over that hump.
“Whether it is me on the field helping us get over that hump or me on the sideline helping whoever is out there get over the hump, the key is let’s just come together and try to find a way to get this done.”
Jackson was pragmatic when asked about McCown’s possible return to game action.
“Will it be a boost? It is a boost just to have any of our quarterbacks playing right now,” said Jackson, who’s used six, including three starters, in seven weeks. “We will know more towards the end of the week here.
“He is a veteran player. He knows how to play and he knows our systems. Hopefully, if he is out there, it means he is the best guy standing right now.”
Spending his week preparing for multiple scenarios at quarterback is nothing new for Jackson.
“It is tough, but we have been flexible all year,” he said. “We have been through it. The team, myself and the coaches, we get it. We are staying after it.”
Without a healthy McCown, rookie Kevin Hogan would’ve been the choice assuming Kessler is sidelined by the concussion. Hogan made his NFL debut against the Bengals.
“It’d be a huge boost,” left tackle Joe Thomas said of McCown’s possible return. “He’s obviously played very well when he’s been in there for us the last couple years. To be able to have him back would be awesome since the guys that are healthy right now at quarterback don’t have nearly the experience that Josh has.”
Offensive lineman John Greco saw how much McCown missed playing.
“I know it’s been driving him nuts, because I know he wants to be out there and obviously he was playing through injuries and we really appreciate that and it just shows you his character,” Greco said. “When you know he’s either going to be playing or one snap away from being in there, it’s kind of a different energy and he has that presence in the huddle.”
A return against the Jets would be a bit ironic. McCown started last season with high hopes, only to be forced out with a concussion after his ill-fated scramble and dive toward the end zone at the end of a 17-play opening drive.
Linebacker Demario Davis made the hit, McCown spun, fumbled and was done for the day.
“How much would I like to land the helicopter?” McCown asked with a laugh. “Yeah, exactly, in the end zone with the ball. That would be great.
“Yeah, it is the Jets, and we could have had a great start last year that did not quite go, but at least we have Demario here now.”
Jets receiver Brandon Marshall played with McCown with the Bears and remains a huge fan.
“That’s my guy, man,” he said on a conference call. “Just an awesome, an awesome quarterback. He’s the example what you want your kid to be. If you want to buy a jersey, that’s the jersey you buy.
“I can’t speak enough about him. He’s the best.”
Contact Scott Petrak at 329-7253 or [email protected] Like him on Facebook and follow him @scottpetrak on Twitter.