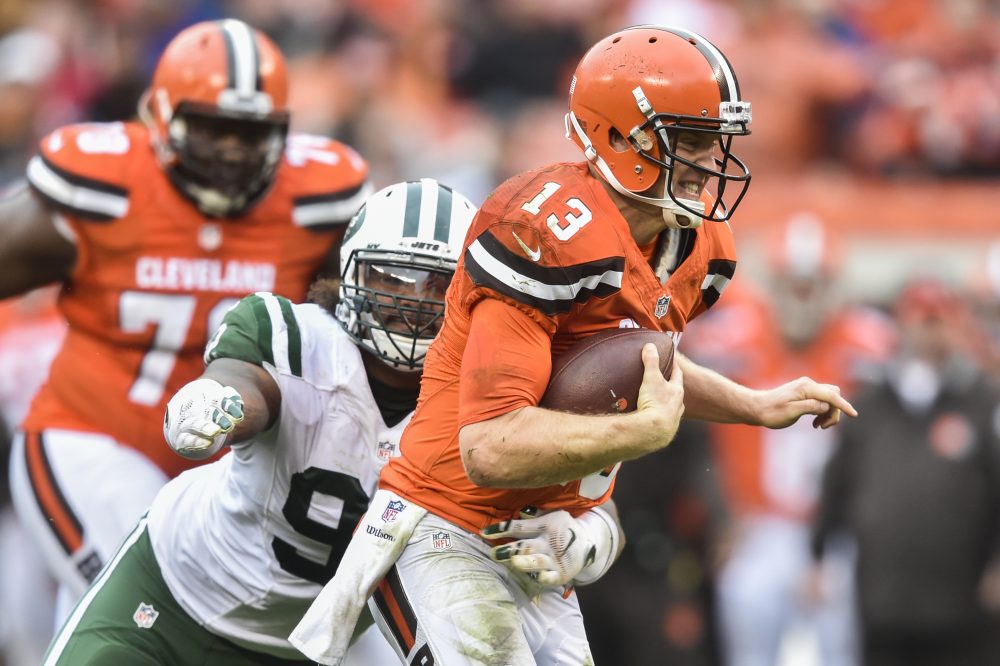 CLEVELAND — Josh McCown looked good for the first two quarters against the New York Jets on Sunday, but after a dismal second half he walked out of FirstEnergy Stadium blaming himself for another Browns loss.
“There is no excuse for me,” McCown said. “No excuse. I should have been better. It is a tough feeling because we put so much into the week and the whole organization put so much into the week, getting ready for the games. When you have opportunities, you have to take advantage of them. We had a couple there in the second half where we could have distanced ourselves. I just feel like I didn’t take advantage of it.”
In the first half he was brilliant — throwing for 228 yards and completing 16 of 27 passes with one touchdown and no interceptions as Cleveland built a two-score lead. But his second half was forgettable — completing just nine of 22 passes for 113 yards, a touchdown and two costly interceptions in Cleveland’s 31-28 loss.
While McCown’s performance wasn’t the only factor in the offense’s struggles — there were a number of dropped passes throughout the game — his game started slipping late in the third quarter, when he overshot Terrelle Pryor on a deep pass down the right sideline on third-and-7. That led to a punt, and on the ensuing drive the Jets extended their lead to eight with 9:42 left.
McCown said Pryor ran the right route and took full responsibility for the throw, adding that he put just a little too much on it.
“I felt like, ‘Hey, that is a touchdown,’” he said. “Just missed him. I didn’t feel like I put that much on the ball, but I missed him. That is not however many people were here or however many people were on both sides, all of those people, only one person had control of that and that is me. That is my fault. You have to correct those things. Like I said, there is so much that goes into it during the week. When you have an opportunity like that, you have to take advantage of it. That is a great play call, play structure, all of those things. When you don’t get it done as a player, it eats at you, for sure.”
McCown’s interceptions came on the Browns first two drives of the fourth quarter. Two plays after the Jets took the lead, McCown tested them deep, again looking for Pryor. He fired a shot down the left sideline, but Pryor stopped short on the route and the ball sailed into the arms of Marcus Gilchrist.
The Browns defense got McCown the ball back with 5:27, but Cleveland’s offense took over at its own
1-yard line. Fortunately for the Browns the Jets helped out with a neutral zone infraction before the Browns could run a play and two plays later McCown tried to find Duke Johnson over the middle. Safety Calvin Pryor closed in and hit the running back, causing the ball to tip into the air and into the arms of outside linebacker Lorenzo Mauldin.
Again the Browns defense did a good job of keeping the Jets out of the end zone, but at that point it didn’t matter. New York hit a field goal to make it a two-score game with 4:06 left.
McCown did lead the Browns down for a touchdown with 15 seconds left, and found Pryor for the ensuing 2-point conversion.
“He battled hard and played his tail off,” Browns coach Hue Jackson said. “Sometimes you have to hold onto the ball. It’s that thing about saying uncle. Sometimes you can’t throw it because those are the things that can happen. Sometimes you are hoping somebody will make a play for you, and you just can’t do it. We will get it better.”
Jackson added that it was too early to address who’d start should rookie Cody Kessler return from the NFL’s concussion protocol and be available for Week 9 against Dallas. Kessler suffered the injury in Week 7 against Cincinnati.
Contact Chris Sweeney at 329-7135 or [email protected]