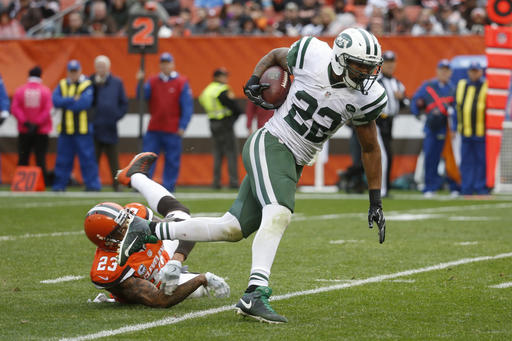 The Browns are halfway home in their pursuit — albeit unintentional — of the franchise’s first winless season.
Ryan Fitzpatrick threw for 198 yards in the second half and led three consecutive scoring drives Sunday, rallying the New York Jets to a 31-28 victory over hapless Cleveland.
With the loss, the Browns fell to 0-8 for the first time in 41 years and continued their strident march toward the top pick in the 2017 NFL Draft. Unfortunately, that means they still have eight games remaining this season.
“It’s a no-brainer, nobody wants to be 0-8, but that’s where we’re at,” Cleveland cornerback Jamar Taylor said. “This game is real simple sometimes when you don’t get it done. We’ve still got eight games left — a long time — but you’ve got to fix the things you do bad.”
The Browns certainly did plenty of bad things in blowing their fourth second-half lead in eight weeks.
It didn’t begin that way, though, as they built a 20-7 advantage by making Fitzpatrick look like the worst quarterback in the NFL, which he is statistically. Cleveland counterpart Josh McCown was razor-sharp in passing for 228 yards and one score.
Things all went downhill from there as New York offensive coordinator Chan Gailey tweaked his game plan during intermission. Jets coach Todd Bowles and cornerback Darrelle Revis also used halftime wisely, blistering the team’s ears with angry words.
“Coach was angry, but we knew we didn’t play up to par in the first half,” New York linebacker David Harris said. “Darrelle told us to come out and play with more energy because we came out flat. His words carry a lot of weight in this locker room, so we are glad we came out with the win.”
What went on in Cleveland’s locker room at the half was unclear, but it definitely wasn’t productive.
The Browns were outgained 287-133 the rest of the way — and that includes 84 meaningless yards on their final drive — to continue a disturbing trend under defensive coordinator Ray Horton.
New York also owned a 24-8 edge in points in the second half, meaning the Browns have now been outscored 121-51 after the second quarter this year.
“They made halftime adjustments, we’ve got to adjust the same way,” Cleveland cornerback Joe Haden said. “We have a lot of rookies out there, but everyone has to make plays. It’s on us. Losing is what it is. Everything for us is 0-and-something.”
Taylor, who starts opposite Haden, also praised the Jets for winning the strategic battle during the break.
“They made some adjustments at halftime and (Fitzpatrick) hit his throws in the second half,” Taylor said. “They made adjustments. We’ve got to be able to make adjustments, too.”
Browns coach Hue Jackson angrily dismissed talk that Horton lost the strategic battle, squarely blaming the players on the field.
Jackson was cranky when he arrived at his postgame news conference. Being asked if Cleveland’s lack of adjustments cost it the game pushed him over the top.
“No, oh my Lord, no,” Jackson said. “We had the chance to make the plays. It would be different if I thought we had no plays to be made. Missed tackles are not (them making) better adjustments. It has nothing to do with adjustments.
“I don’t think there was any adjustments they made that were so spectacular. They just started making plays. That is what it is.”
If there was a positive to be gleaned, there were only about 30,000 witnesses at FirstEnergy Stadium on the wet, windy afternoon.
Many of the fans were either too damp or too drunk to boo during the fourth quarter, but did stage the blooper of the season in the first by unfurling the Browns’ enormous banner that reads, “THIS IS THE DAWG POUND.”
Appropriately, given the team’s record, stadium employees set up the three sections in the wrong order, so it spelled out “GPODAWUND.”
“We can’t sit here and cry and complain about it,” Cleveland linebacker Christian Kirksey said. “That’s what we are, 0-8. My goal is to go 8-8. But we have to get back to the fundamentals and become a better tackling team.”
Contact Brian Dulik at [email protected] Follow him @BrianDulik on Twitter.