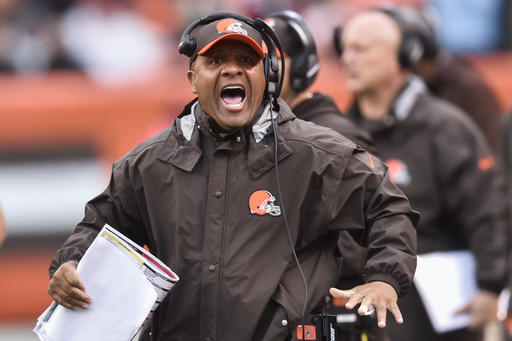 CLEVELAND — Quarterback Josh McCown and the Cleveland offense lost all momentum generated in a 20-point first half.
Cornerback Jamar Taylor lost receiver Quincy Enunwa for a 57-yard completion to set up the Jets’ go-ahead touchdown.
The Browns lost their fourth second-half lead of the season, giving up 24 unanswered points before scoring a touchdown with 12 seconds left that was followed by an unsuccessful onside kick.
The Browns lost 31-28 to the New York Jets on Sunday at a dreary FirstEnergy Stadium with thousands of empty seats.
The Browns lose a lot.
Coach Hue Jackson is 0-8 at the halfway point of his first season in Cleveland. It’s the worst start since 0-9 in 1975 set the low mark for the franchise.
“It is no magic,” Jackson said. “Our players, our staff, coaches and the team, we have to go do it. We have to finish it.
“We have to get this monkey off our back. It is just that simple.”
The Browns have lost 11 straight, with their last win coming Dec. 13 against San Francisco with Johnny Manziel at quarterback. It matches the longest losing streak in franchise history (1974-75 and 2011-12).
The Browns have lost 18 of 19, the worst stretch in team history, and 26 of 29.
While the Indians and Cavaliers have the city beaming with pride, the Browns keep breaking its heart.
“I’m not worried about the no-shows and people that come,” Jackson said. “I respect our fans and I appreciate the fans that did come to the game, but we have to give them something to come to the game about. I get that.”
The outlook was so much brighter at halftime.
McCown’s return after spending five weeks on the sideline with a broken collarbone was a resounding success. He threw for 228 yards, the most for a Browns quarterback in the first half since Bernie Kosar’s 275 against the Miami Dolphins on Nov. 10, 1986.
The Browns scored 10 points in the final 1:51 to lead 20-7. Receiver Terrelle Pryor exposed perennial Pro Bowl cornerback Darrelle Revis for six catches and 101 yards.
And the 1986 team was honored at halftime, with coach Marty Schottenheimer addressing the crowd and quarterback Bernie Kosar drawing the loudest ovation.
Things fell apart quickly.
Ryan Fitzpatrick, who went 3-for-14 for 30 yards in the first half, led three touchdown drives against the 31st-ranked defense that resorted to its usual dismal ways. Blown coverages and missed tackles contributed to drives of 12, eight and 13 plays as the momentum switched sidelines and the energy left the stadium.
Fitzpatrick went 13-for-20 for 198 yards and a touchdown after halftime. He entered the game with a league-worst 11 interceptions but the Browns couldn’t force a turnover.
The Jets rushed 35 times for 171 yards, including a 35-yard draw for a touchdown by Bilal Powell.
Linebacker Chris Kirksey was convinced he’d get an interception, but stood in the locker room shaking his head as he thought about what went wrong in the second half.
“I can’t even tell you, man,” he said. “I’m still trying to figure out myself. I don’t know.”
The Cleveland offense was just as awful in the second half, and McCown piled the blame on this 37-year-old shoulders. Until the final 84-yard drive with the Jets in a prevent defense, McCown threw for only 30 yards in the second half. After two completions to open the third quarter, he had an 0-for-8 stretch with two interceptions.
He finished 25-for-49 for 341 yards, two touchdowns, two interceptions and a 70.2 rating.
“I take this one squarely on me,” he said. “I don’t feel like I played to the level that I’m capable of playing at, and that I played to in the first half. I feel like it cost us the ballgame.”
Jackson said it was too early to say if McCown or rookie Cody Kessler would start Sunday when the Dallas Cowboys visit. Kessler had started five in a row before missing the Jets game as he remained in the concussion protocol.
McCown criticized himself for missed opportunities, including a third-quarter overthrew of Pryor, who had gotten behind Revis but couldn’t catch up to McCown’s heave. Pryor was blanked in the second half, except for a 2-point conversion after the late touchdown.
With a veteran back under center — the other three quarterbacks on the roster are rookies — Jackson put the game in McCown’s hands. The Browns went without a huddle extensively for the first time this season and committed to the pass against a Jets defense with a stout front and ranked No. 2 against the run. Jackson called only 15 runs that netted 58 yards.
The plan worked wonderfully early but fizzled in the second half. Cleveland moved to the Jets 34-yard line on its opening possession, but a swing pass for receiver Andrew Hawkins, who had two touchdowns, appeared to slip out of McCown’s hand and went for a 3-yard loss when it was ruled a backward pass. The Browns punted after two incompletions.
The next three drives ended with the overthrew for Pryor and interceptions — a deep jump ball for Pryor in which he stopped running and a slant to running back Duke Johnson (six catches, 87 yards) jumped by the safety and deflected into the air.
“People are going to slow you down a little bit, then you have to wrestle the momentum back and then you have to make plays when they are there,” Jackson said. “We had some chances, and we did not make them.”
It’s become a theme in a lost season.
“You’ve got to have kind of a killer instinct when it’s winning time,” left tackle Joe Thomas said.
Contact Scott Petrak at 329-7253 or [email protected] Like him on Facebook and follow him @scottpetrak on Twitter.