Browns Analysis: Breaking down the protection breakdowns and assigning blame 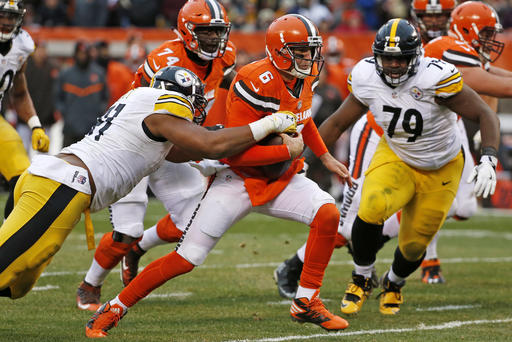 Cody Kessler has missed part or all of four games with two concussions and injuries to his chest and ribs, and will miss a fifth Sunday. Josh McCown missed five games with a broken left collarbone. Robert Griffin III has been out since the opener with a broken bone in his left shoulder. Charlie Whitehurst injured a knee in his only action.
The list is long and ugly.
It could be much worse.
Browns quarterbacks have taken a beating throughout the 0-11 start to the season and walked away from much of it. The physical punishment got so severe Sunday in a manhandling by the Steelers — Kessler suffered his second concussion in a month and McCown’s chin was bloodied — receiver Terrelle Pryor lashed out at the blockers.
The difficulty in trying to break down the protection breakdowns are the numerous elements involved. Stopping the pass rush starts Tuesday with the game plan design, continues with the quarterback and linemen figuring out the assignments before each snap and ends with the line, tight end and backs blocking and the quarterback throwing on time.
A lot can go wrong with all the moving pieces. And it certainly did against the Steelers as Kessler and McCown were sacked four times apiece, hit many more and pressured consistently.
“It is a unit issue. We all have a part in it,” Jackson said Monday.
After watching replays of the eight sacks and the play that knocked Kessler from the game several times, I agree with Jackson: The blame belongs to everyone.
But that’s a copout. So here’s a ranking of the failures.
1. STARTS AT THE TOP
Jackson is the coordinator and play caller and responsible for the protection plan. Too often it left running backs Duke Johnson and Isaiah Crowell one-on-one with inside linebacker Lawrence Timmons in the definition of a mismatch.
Timmons made Johnson look silly in the second quarter by lifting him off his feet and walking him into Kessler. Javon Hargrave was there to pick up the sack after beating center Cameron Erving on a stunt.
Timmons got his sack when he beat Crowell in the fourth quarter. Even when he didn’t finish with a sack, Timmons tormented the backs and quarterbacks. On the play Kessler got hurt, Timmons was stopped initially but kept going, looped around and launched at Kessler.
Jackson has devoted more bodies to protection since right tackle Austin Pasztor had a nightmare performance in Miami in Week 3. The running backs and tight ends just didn’t help enough against Pittsburgh despite trying hard.
2. QB PROTECT THYSELF
Kessler and McCown didn’t do Jackson, the line or themselves any favors. Sure, the Steelers’ zone blitz scheme is tricky, but it’s been around for decades. Yet time after time the quarterbacks didn’t set the protection properly and allowed the running backs to be responsible for the blitzing inside linebackers.
“I feel like I could have helped us out,” McCown said. “If you are looking for someone to point the blame, just point it right here on me because those guys are fighting hard and they’re doing the right things.”
Kessler hasn’t done much to help the line all year as he’s consistently held the ball too long, creating unnecessary pressure and punishment. On the third sack of the game, the Steelers rushed only four but Kessler never pulled the trigger, allowing outside linebacker Arthur Moats to get around tight end Randall Telfer. Receiver Corey Coleman had come open on a deep cross but Kessler didn’t see him.
McCown was at least partially responsible on three of the sacks he took. He stepped up into Moats, who had gotten past Pasztor. Then he didn’t throw to his outlet Johnson when end Stephon Tuitt used a stunt to beat Pasztor and right guard John Greco. Finally, on the game-sealing strip-sack, McCown couldn’t unload before inside linebacker Ryan Shazier chased him down.
The last one wasn’t all McCown’s fault, as Shazier came through untouched on a four-man zone pressure when Greco didn’t see him.
3. BLURRED LINE
The line shouldn’t escape the harsh spotlight. Browns quarterbacks have been sacked a league-high 38 times and hit countless others, and much of that falls on the five men up front.
The line was hurt by the free agent defections of right tackle Mitchell Schwartz, who wanted to stay, and center Alex Mack, who never seemed likely to return. Then left guard Joel Bitonio was lost for the season with a serious foot injury.
Jackson has tried several combinations due to necessity and ineffectiveness, and in a quest for continuity seems to have settled on Joe Thomas at left tackle, rookie Spencer Drango at left guard, Erving at center, Greco at right guard and Pasztor at right tackle.
Thomas, as usual, wasn’t the problem and didn’t give up any sacks Sunday. Everyone else did.
Tuitt got Greco. Erving continued to struggle in many facets, particularly on stunts by the tackles. And Harrison walked Drango back into Kessler to set the Steelers’ career sack record.
Plenty of blame to go around, plenty of people to take it.
Contact Scott Petrak at 329-7253 or [email protected] Like him on Facebook and follow him @scottpetrak on Twitter.

Browns Notes: QB Josh McCown to start vs. Giants, mad at himself for turnovers in recent relief role
Browns WR Terrelle Pryor never gave up on NFL career, has come long way in a year; he credits his mom, hard work and love of football