Browns Notes: Hue Jackson says he uses analytics in many areas to help him make decisions 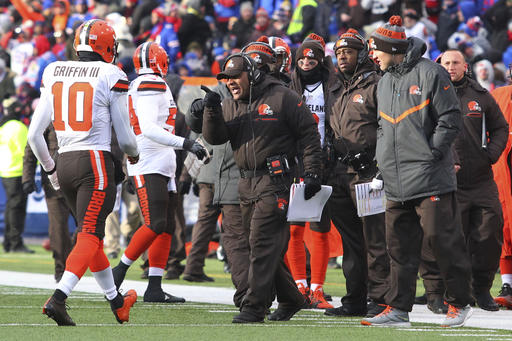 BEREA — Analytics has been a controversial topic since owners Jimmy and Dee Haslam overhauled the front office following last season. Many of the top decision-makers have backgrounds stronger in analytics than football, including chief strategy officer Paul DePodesta, the “Moneyball” expert from Major League Baseball.
While the Browns embraced an emphasis on analytics, many people in the football world ripped the approach and insisted it can’t succeed.
The 0-14 record in the first year of the experiment hasn’t won much support, but coach Hue Jackson said the data-based information has been helpful and he uses it often.
“There are a ton of things,” he said Wednesday. “We try to get the best information we can. Now are we going to be perfect all the time? No. But at the same time, we trust and I trust in our department that way to help me make those decisions.”
Jackson said he works closely with football research analyst Dave Giuliani, who does projects, brings Jackson information and is available on the headset during games.
“I can communicate with them whenever I need to,” Jackson said. “It is a good thing.”
Jackson appreciates the extra data but isn’t always swayed by it.
“You have to be open, but there are certain things that just because this says that does not mean that is right for you or right for your football team,” he said. “It is important that you weigh those things, but the important thing is that he is bringing different thought processes to me. That helps.
“How can we gain an extra possession? How can we do this a little bit better? How can we do that better? That is truly what it is all about — how can you be at your best when you are playing a game, coaching a game or whatever it is.”
Jackson has used analytics to decide when to defer after winning the coin toss and when to try a 2-point conversion — and defends those choices. He said the best thing from Giuliani is the study of different situations from games across the league.
“This is football, real-time football that we are talking about with video to substantiate that,” Jackson said.
BUYER BEWARE
Former NFL receiver Brian Hartline doesn’t believe in Browns receiver Terrelle Pryor. And he doesn’t think the Browns should invest in Pryor with a long-term contract when he becomes a free agent after the season.
They were teammates at Ohio State and last year with the Browns.
“Is he my No. 1? God, I hope not,” Hartline said on 105.7-FM The Zone in Columbus. “I want a guy day in and day out I know what I’m getting. You don’t know what you’re going to get. You don’t know who’s going to show up. You don’t know if he’s going to get in trouble. You don’t know if he’s going to smart off. I need stability.”
Hartline said Pryor might be a team’s No. 2 receiver after catching 67 passes for 877 yards and four touchdowns in the first 14 games of his first full year at the position. But Hartline, who was cut by the new Browns regime in the offseason, noted Pryor disappeared in the last two games with five catches for 22 yards.
“So I’m very apprehensive as a Cleveland Browns guy to give out a contract,” Hartline said. “Listen, you had one year. You’re a flash in the pan. You’re trying to tell me with a guy that had suspect personality characteristics, I’m going to go ahead and hand you a bunch of money but you’re going to work harder? Uh, I think I’m going to bet against that if I’m a betting man.
“I’m wishing him well and I’m going to go ahead and go build something else ’cause I’m not sure Terrelle Pryor is a building block.”
Jackson said he still believes Pryor will be a foundation piece.
“Oh, yeah, that has not changed,” he said. “You guys know I have a tremendous amount of confidence in Terrelle. I think he is only going to get better as he moves forward.”
ELITE COMPANY
Left tackle Joe Thomas became the fifth player in NFL history to open his career with 10 straight Pro Bowl appearances. He joined Rams defensive lineman Merlin Olsen (14) and Cowboys cornerback/returner/running back Mel Renfro, Giants linebacker Lawrence Taylor and Lions running back Barry Sanders, who made it in their first 10 seasons.
Thomas watched Sanders play and knows all about Taylor.
“Then there are guys like Mel Renfro, and you are like, ‘Hmm, I wonder who that guy is,’ and then you look it up and you are like, ‘Wow, this guy was an absolute stud,’” Thomas said. “So it is really special to be part of such a small group that includes some modern players but also some guys that maybe my father or my grandfather grew up watching.”
The other four in the 10-for-10 club are in the Pro Football Hall of Fame, and Thomas said making it to Canton was his top individual goal when he got drafted.
“Obviously making the Hall of Fame would be the ultimate individual accomplishment in our sport and it is something that very few people are ever able to experience,” he said.
FUN AND GAMES
Thomas believes the league is making strides by including a skills challenge and dodgeball to the Pro Bowl this year. He thinks fans want to see more fun activities in addition to the watered-down game.
“I think people are going to watch that,” he said. “I am excellent at dodgeball. Ten-time Pro Bowler going back to middle school.”
Thomas has suggested to the league doing skills challenges not specific to your position, such as offensive linemen throwing or catching and quarterbacks lifting weights. He also recommends a golfing long-drive competition, a 3-point-shooting basketball contest and a home run derby.
EXTRA POINTS