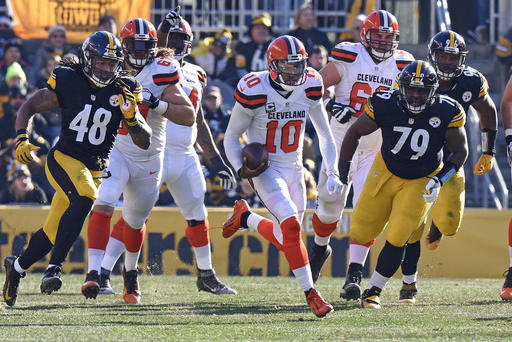 PITTSBURGH — Robert Griffin III hopes Sunday wasn’t the last time he played quarterback for the Browns. In case it was, he had a message for his teammates.
“I walked around the locker room afterwards and just told everybody, one-on-one, man-to-man, that it was a pleasure to fight with them every week that I was able to be out there,” he said after the 27-24 overtime loss to the Pittsburgh Steelers. “I don’t know what’s going to happen. All I know is that I feel like I can help this team win games.
“We didn’t get it done today. But every week I was able to get better.”
Griffin, 26, signed a two-year, $15 million deal in the offseason. He’s due $750,000 if he’s on the roster March 11 and a $6 million salary for 2017. The quarterback situation is unsettled — the Browns could pick a passer with the No. 1 pick in the draft or try to trade for New England’s Jimmy Garoppolo — therefore Griffin’s future is.
“It’d be awesome,” he said of returning. “I want to be a part of the growth process here in Cleveland.”
Griffin started the final four games and said the finale was his best outing and he’s seeing the field better than ever under the direction of coach Hue Jackson and associate head coach-offense Pep Hamilton. He went 29-for-40 for 232 yards, two touchdowns, an interception and season-best 92.9 rating. He was sacked four times and rushed five times for 32 yards.
The touchdown passes were his first of the season and with the Browns.
“Until you guys had said it, I really wasn’t paying attention to it,” he said. “So we got two for you.”
Griffin hoped to resurrect his career after a rough ending in Washington that saw him benched for all of last season. A broken bone in his left (non-throwing) shoulder in the opener derailed that.
“I dang sure would’ve liked to play a lot more games,” he said, adding the bone isn’t 100 percent healthy but the doctors said it was good enough to play. “I’ve never heard that story of anyone who didn’t take a chance, didn’t take a risk and came away to be extremely successful. I felt like I owed it to my team, myself and 10 years from now the guy standing before you guys, prayerfully, to do that.”
Jackson liked the improvement but didn’t commit to a second year for Griffin.
“Every week he went out there and got better,” he said. “I still think there’s another level for him to play at. We’ve got to evaluate and see if it’s the right thing for us as we move forward.”
TOUGH FINISH
Offensive lineman Cameron Erving left the locker room on crutches after suffering what appeared to be a serious knee injury while blocking on a field goal.
“We’ll find out more about it tomorrow,” Jackson said. “I don’t think it’s something that’s good.”
Erving, the No. 19 pick in 2015, made his first start at right tackle after spending the season at center. He handled himself pretty well but allowed a strip-sack to linebacker Bud Dupree before recovering the fumble.
Jackson replaced Erving with rookie third-round pick Shon Coleman as planned in the third quarter but Erving re-entered when Coleman suffered a minor knee injury then got hurt.
“I thought there were some good things and there was a sack given up,” Jackson said.
GOOD AND BAD
Isaiah Crowell rushed for a career-high 152 yards, including a 67-yarder to set up the tying touchdown, and finished the season with a career-high 952 yards. But the finale included disappointment as he fumbled on the 3-yard line with 56 seconds left as the Browns were going in for the go-ahead score.
“You know me, I try to do too much,” he said. “Should have just got down, tried to fight to get extra yardage. It’s my fault. I’ll learn from it.”
Crowell got a season-high 19 carries with Duke Johnson limited by an ankle injury. Johnson couldn’t finish the game and George Atkinson took some of the snaps and scored the tying touchdown.
Griffin didn’t want Crowell blamed for the loss.
“No one play lost this game. I think that’s extremely important for everyone to know,” he said. “Just in a nutshell, the way this game went was kind of just the way our season went. The ball just didn’t bounce our way a couple times.”
LINEUP SHUFFLE
Jackson made two other changes to the starting offensive line for the finale.
Austin Pasztor shifted from right tackle to right guard and undrafted rookie Anthony Fabiano made his NFL debut at center. The Harvard alumnus had never started a game at the position.
Fabiano appeared to hold his own but had a critical mistake, sending a shotgun snap over the head of Griffin that was recovered by Steelers safety Sean Davis and led to Pittsburgh’s first touchdown in the final minute of the first half. Jackson said the snap was premature. Fabiano also was beat on a couple of pass rushes up the middle.
The starting line combination was the seventh of the season following season-ending injuries to guards Joel Bitonio and John Greco and a bruised lung for Erving early in the season.
FOES KNOWN
The Browns’ opponents for next season are set.
They will host Jacksonville, Tennessee, Green Bay, the New York Jets and AFC North rivals Pittsburgh, Baltimore and Cincinnati. The home game against Minnesota will be played in London.
The Browns will travel to Houston, Indianapolis, Chicago, Detroit, San Diego (which could move to Los Angeles), Pittsburgh, Baltimore and Cincinnati.
EXTRA POINTS

Linebacker Christian Kirksey had 11 tackles, including three for loss and a sack. He had a career-high 143 tackles.
Rookie tight end Seth DeValve caught a 12-yard touchdown and finished the season with 10 catches for 127 yards and two touchdowns.
Starting outside linebacker Cam Johnson (groin) was inactive. Rookie Joe Schobert took his place. The other inactives were quarterbacks Josh McCown and Kevin Hogan, defensive lineman Stephen Paea, cornerback Trey Caldwell (hamstring), running back Darius Jackson and offensive lineman Gabe Ikard.
One of the team buses broke down on the drive Saturday.