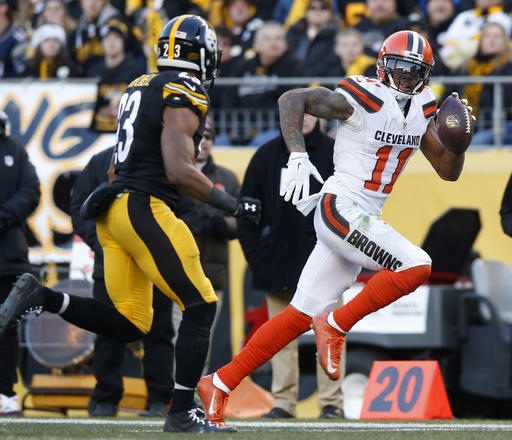 BEREA — Terrelle Pryor’s agents stopped contract negotiations with the Browns for the final several weeks of the season. With the last game played and Pryor over 1,000 yards in his first full year at the position, he expects the conversations to resume.
And he said he conveyed to agents Drew and Jason Rosenhaus his desire to return to Cleveland.
“Absolutely. I told them and we’ve had a lot of conversations,” Pryor said Monday as the players cleaned out their lockers following the franchise-worst 1-15 season. “At the end of the day, football is a business. And it’s got to make sense for myself. I’d love to play for Coach Hue (Jackson), I loved playing with him this year.
“Like I always tell you guys, I believe in God, I walk with him. Wherever he’s going to put me he’s going to put me and it’s going to be for a reason. If it’s staying here, which I don’t mind at all, I love this place, I love Cleveland, I love the fans here, it’s amazing.”
Pryor, 27, is eligible to become an unrestricted free agent in March. He and linebacker Jamie Collins are the team’s top players scheduled to hit the market, but the Browns have two months to keep them off it.
“These guys are priorities for us, and we will get to work on re-signing them,” executive vice president of football operations Sashi Brown said.
He wouldn’t say if he’ll use the franchise tag to guarantee keeping one of the two for at least another season.
“Our plan on both of those players is try to extend them without the use of the tag and I would leave it at that,” Brown said.
Pryor led the Browns with 77 catches, 1,007 yards and four touchdowns. The reception total is fourth-most by a Browns receiver and he’s the seventh to pass 1,000 yards.
“The team is always first, but you always have goals and that’s a receiver’s goal,” he said.
Pryor established himself as a legitimate receiver after the switch from quarterback in 2015. Teams across the league must determine if he’s a true No. 1 wideout or a good No. 2. Either way, he’s expected to get a contract worth about $10 million a year.
He said last week money will be a factor.
“It’s got to make sense for both sides,” he said.
Pryor said he’ll have surgery Wednesday in Cleveland to repair torn ligaments in his right middle finger and rehab for three or four weeks at the Browns facility.
CHANGES COMING?

Jackson’s job is safe, but he didn’t rule out making changes on his coaching staff. “I’m going to take a look at it all,” he said. “I think our staff worked extremely hard this year, but I think as being one of the leaders with these men here (Brown and chief strategy officer Paul DePodesta), we’ve got to go back and look at it all and see how we can get better. I think that’s truly our charge. How can we get this organization better in all areas as we move forward?”
The league’s worst record and no head coaching change make the Browns a strong candidate to be asked to coach one of the teams in the Senior Bowl. “We’ll look for a correspondence some point this week,” Brown said. It’s a great opportunity to get an up-close look at seniors entering the draft while working with them. “I’ll jump. I’m there,” Jackson said. “Yes, sir.”

NO SOURPUSS
Offensive lineman Cameron Erving has been through a lot in his two years with the Browns. The latest setback was a knee injury Sunday that left him on crutches and could require surgery, although he said he hadn’t had an MRI.
“When life gives you lemons, you suck them,” he said. “I’m a professional athlete, these are the things that you have to deal with sometimes.”
Erving, the No. 19 pick in 2015, started 12 games this year at center after missing three games early in the season with a bruised lung. He started the finale at right tackle and liked it.
“It felt really good playing tackle again, just being able to move out, get some reps there,” said Erving, who was predominantly a left tackle at Florida State. “I think I did pretty well. I gave up one play, but it’s one of those things, I feel like I got out too fast and tried to throttle and he got me around the edge.”
Erving was awful in limited time at guard as a rookie, then struggled to make the conversion to center this season.
“He’s shown versatility and I think we’re still trying to figure out what his position is going to be going forward,” left tackle Joe Thomas said. “If you have a guy that loves football and works hard every single day, you can find a place for him on your football team, because you want to build your football team around guys that love football and want to work hard and winning is important to him.”
A FAMILIAR FACE
Defensive end Desmond Bryant missed the season with a torn pectoral muscle. He returned for the exit interviews and said he expects to be cleared medically in time for the offseason program.
Because Bryant was injured working out away from the team before training camp and placed on the non-football injury list, the Browns weren’t obligated to pay him. He was due to make $6 million in 2016 and $7 million in ’17, so they reached a deal in which Bryant was paid $1.25 million this season and will make $3 million next year with a chance to receive another $4 million through incentives, according to an ESPN report.
He can’t wait to return to the field.
“I missed doing my job, and watching every week on TV other guys doing what I love to do kinda sucked,” he said.
HIGH HOPES
Right guard John Greco suffered a serious midfoot injury Nov. 27 against the New York Giants, had Lisfranc surgery Dec. 13 and is still using a scooter but said he’ll be ready to practice by training camp in August.
“I have no doubt that I’ll be ready to go for camp,” he said.
A Lisfranc injury used to be considered career-threatening, but Greco said the specialist told him surgery would fix him completely.
“They said you’ll be able to bounce back 100 percent if you get the surgery, it’ll be like new,” Greco said.
Left guard Joel Bitonio suffered the same injury eight weeks earlier and had surgery. He’s off the scooter and in a walking boot.
EXTRA POINTS

Offensive lineman Austin Pasztor is scheduled to be an unrestricted free agent. He started all 16 games for the first time in his five-year career, the first 15 at right tackle and the finale at right guard. “I think there’s bright things ahead for the Cleveland Browns, so I’d love to be a part of it,” he said.
Thomas said he’ll play in the Pro Bowl despite a knee injury that prevented him from practicing much of the season. He said surgery could be required.
The Browns signed eight players from the practice squad to the reserve/future list, including tackle Zach Sterup (6-foot-9, 320 pounds).