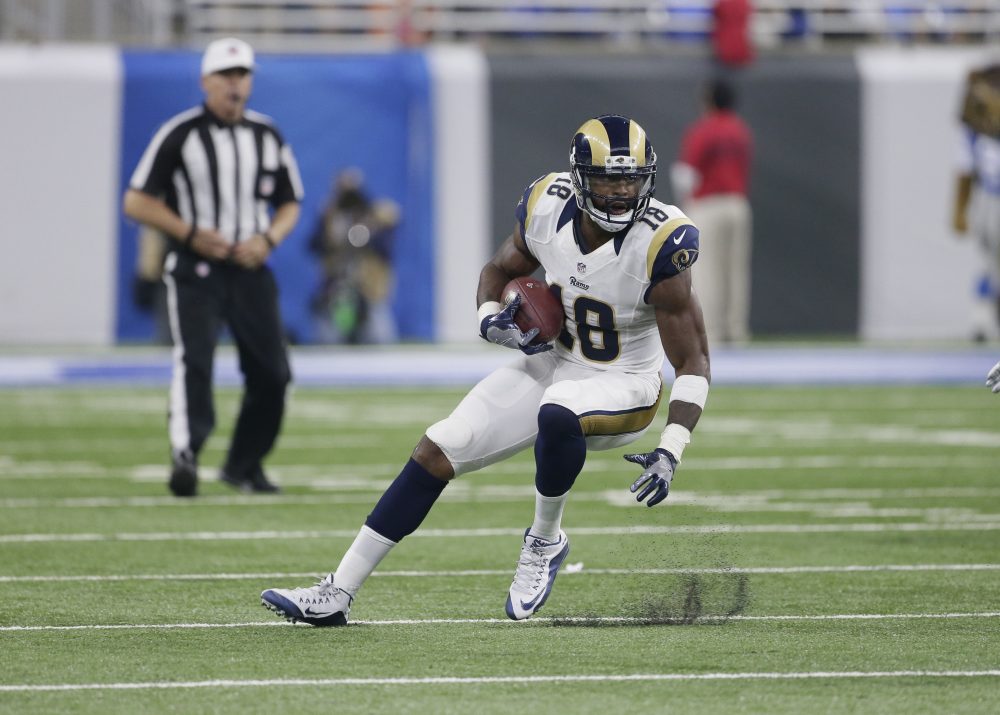 The Browns added a 1,000-yard receiver in Kenny Britt.
They likely lost one in Terrelle Pryor.
Britt, 28, was the first free agent to join the Browns as free agency opened Thursday. The 6-foot-3, 215-pound wideout agreed to a four-year, $32.5 million deal with $17 million guaranteed.
He started all 15 games he played last season with the Los Angeles Rams, catching 68 passes for 1,002 yards and five touchdowns — all tops on the team.
The addition of Britt doesn’t slam the door on the return of Pryor, but it’s a long shot. The Browns sought a long-term deal with Pryor, but he opted to test the free agent market.
He broke through in his first full year as a receiver after switching from quarterback, leading the Browns last year with 77 catches for 1,007 yards and four touchdowns. He didn’t immediately sign a contract elsewhere and was reportedly scheduled to visit Washington.
In the meantime, the Browns moved on to Britt. NFL.com ranked Pryor as the 10th free agent available, with Britt 32nd.
“Kenny’s been a proven playmaker in the National Football League,” coach Hue Jackson said in the news release. “Obviously, he brings credentials to the position and to the Cleveland Browns. He’s a big guy. He’s fast, tough. He’s made plays in his career, and we’re looking forward to him doing the same thing here.”
Britt has played eight years in the league after being the 30th pick of the Tennessee Titans in 2009. He spent the last three years with the Rams. For his career, he has 309 catches, 4,881 yards, a 15.8 average and 30 touchdowns.
Britt had a rough start to his career on and off the field. He didn’t fulfill his potential and was arrested multiple times, mainly for driving violations, and served a one-game suspension from the league.
Last season may have been his best. He was more consistent and set career highs with catches and yards — his first 1,000-yard season and the first for the Rams since Torry Holt in 2007.
The Browns were desperate to add a veteran to a young receiving corps that includes four draft choices from last year.
SAFETY SECOND
The Browns were happy with the first day of free agency but sorry they failed to land safety Tony Jefferson.
He signed with the Baltimore Ravens for four years and $36 million with $19 million guaranteed after spending four years with the Arizona Cardinals. The Browns reportedly offered more money but he chose their rival.
The significant need at safety only grew when free agent Jordan Poyer left the Browns to sign with the Buffalo Bills. Poyer joined the Browns in 2013 and started 10 of 45 games, including all six in 2016 before he went on injured reserve with a lacerated kidney.
With all the early free agent signings on offense, the Browns are likely to focus on defense during the draft. They have 11 picks, including five within the first 65 selections.
Contact Scott Petrak at 329-7253 or [email protected] Like him on Facebook and follow him @scottpetrak on Twitter.