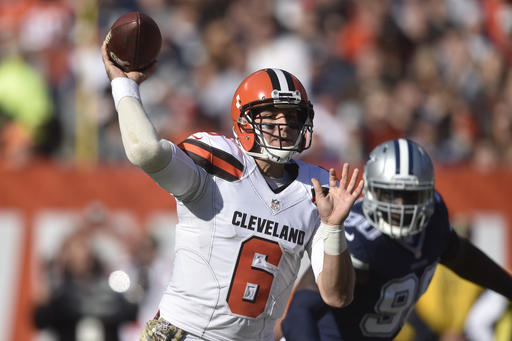 BEREA — Cody Kessler’s right arm simply wasn’t strong enough.
The scouting report that followed him from USC proved accurate in his rookie season, as the ball took too long to reach its target and Browns coach Hue Jackson became frustrated with his reluctance to throw deep. So Kessler’s offseason was dedicated to improving his arm strength.
He spent “countless hours” in the gym building up his core and upper body. He worked with quarterback guru Tom House to refine his throwing mechanics. He committed to a strict and boring diet to transform fat into muscle.
The results are noticeable.
“Cody is stronger and the ball has more zip on it,” Jackson said Wednesday after an organized team activities practice. “He has worked extremely hard. What he is working at now is maintaining it and being able to do it week in and week out and day in and day out. That is his challenge, and we will keep staying after it with him.”
Jackson was impressed enough to name Kessler the No. 1 quarterback for the start of OTAs, ahead of veteran Brock Osweiler and rookie DeShone Kizer. Jackson said it’s up to the chasers to take the job from Kessler and that he won’t give it up easily.
“I mean, obviously it’s a sense of confidence you get,” Kessler said. “But at the same time, I just look at it as an opportunity. An opportunity and a chance to go out there and run with the guys that are going to be out there on the field.”
Kessler didn’t really get that chance last year until the season had started and he was forced to start in Week 3. That wasn’t the plan.
The Browns surprised many experts when they selected Kessler in the third round with pick No. 93, and hoped to let him learn by watching. He isn’t an elite athlete (4.89-second 40-yard dash) and lacks the desired height (6-foot-1¼, 220 pounds) to see over the line, and CBS draft analyst Dane Brugler ranked him the 17th quarterback in the 2016 draft class.
“Kessler has a low NFL ceiling due to his lack of physical traits, lacking the necessary arm strength to put the ball where he wants on a consistent basis,” wrote Brugler, who didn’t think Kessler should be drafted.
Left tackle Joe Thomas said the improvement is obvious this year, and the ball definitely came out of Kessler’s hand better during practice Wednesday. He’ll never be able to match Kizer or Osweiler in power or ease of delivery, but Kessler looked much more comfortable and efficient throwing the difficult out route.
“The coolest part about it is mechanical-wise, it feels like I’m throwing it harder but with a little bit less effort,” he said. “It doesn’t feel like I’m putting as much strain on my shoulder or my arm and just trying to throw it as hard as I can every time. It just feels a little bit more fluid.”
Kessler has worked on making better use of his legs.
“A lot of my throws last year was completely upper body,” he said. “Just being able to stay back on your weight and push off your back plant foot is something that’s huge.”
Kessler was called upon as a rookie after injuries to veterans Robert Griffin III and Josh McCown. He went 0-8 as a starter and suffered a pair of concussions but handled himself well in tough circumstances.
He completed 65.6 percent for 1,380 yards with six touchdowns, two interceptions and a 92.3 rating. Because he only threw 195 passes, he didn’t qualify for the league’s season-ending statistical rankings, but he would’ve been fourth in interception percentage (1.0), ninth in completion percentage, 15th in passer rating and tied for 25th in touchdown percentage (3.1).
The numbers illustrated what Jackson believed — that Kessler was too careful with the ball. He often held it too long — 21 sacks — and was benched vs. the Ravens on national TV for not pressing the action downfield.
Kessler said the offseason work has made him more confident throwing deep, which frees him mentally to focus on other areas of the job.
“Knowing that you can get it there and put a little more on it is something that definitely helps you out in confidence level and everything,” he said.
Kessler had a sturdy frame when he arrived but decided he needed to get fitter in the offseason. He added a couple of pounds, turning fat into muscle. As important as the work in the weight room was his commitment at the dinner table.
For about three months, he stuck to the strictest of diets laid out for him by the team’s performance dietitian. Kessler rattled off his daily meal plan.
A power bar before a workout; two scrambled eggs, plain oatmeal, bananas, apples, milk and water for breakfast; almonds for a snack; turkey and provolone on whole wheat bread, 15 baby carrots, a banana, milk and water for lunch; pretzels with peanut butter for a snack; and a grilled chicken breast with spinach (no dressing), plain whole wheat pasta, milk and water for dinner.
“It worked for me. I really stuck to it,” he said. “It was boring but it was something I was committed to. It was tough but it was worth it.”
Contact Scott Petrak at 329-7253 or [email protected] Like him on Facebook and follow him @scottpetrak on Twitter.

Browns Notes: Myles Garrett doesn't practice with "a little nick," says he'll be back "full-tilt" next week
Browns sign LB Christian Kirksey to 4-year, $38M extension, expect him to be part of turnaround