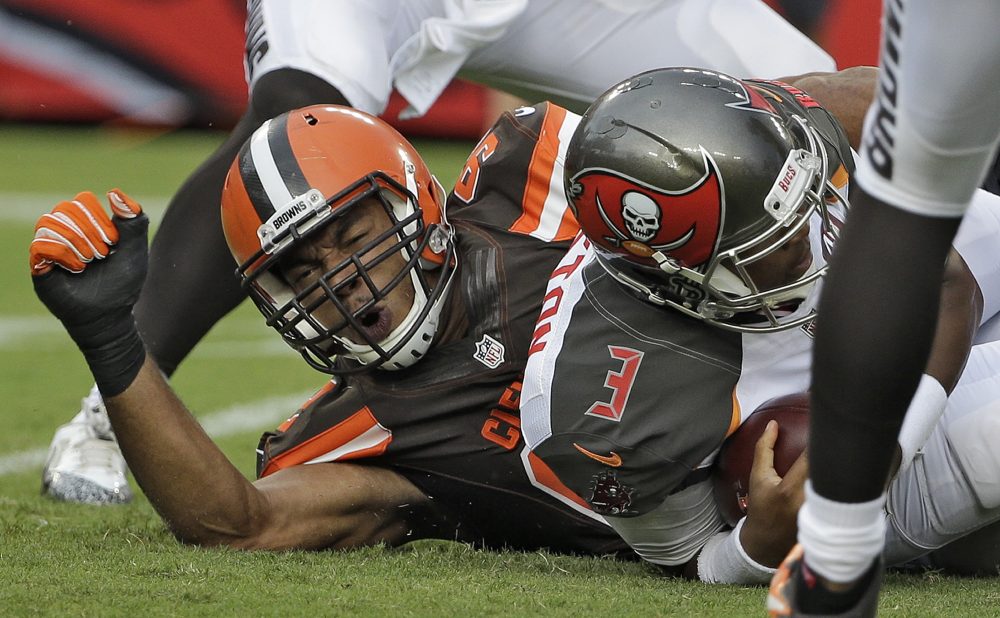 Desmond Bryant’s pectoral muscle was off the bone, requiring surgery and a marathon rehabilitation process that’s nearing a year and its completion. Yet the 31-year-old defensive lineman never considered retirement.
“I’m a competitor, man,” he said Tuesday after an organized team activities practice. “I love this game. Long before the Browns ever paid me to play football, I was out there doing it for fun for free.
“When that was taken away from me, there was nothing I wanted more than to get it back.”
The motivation took an interesting form — Steelers quarterback Ben Roethlisberger, who’s caused torment for Bryant, the Browns and their fans. The Browns host their rival Sept. 10 to open the season.
“It’s a long process, but you’re sitting on the rehab table and you’re thinking about that next time you get to get on the field and you get to see Big Ben on third down the first week of the season,” he said. “I’ve done some good things in this league, but there’s still a lot left that I want to prove, so that’s another motivation for me to get back out there.”
Bryant returned to practice in a limited role last week during OTAs. He hasn’t participated in team drills but said he’s on schedule for the season.
“Coach’s got a game plan for me. So I’m just following what they’re telling me,” he said. “I’m ready.”
Bryant tore the pectoral working out in mid-July, beginning the long road back.
“Man, it seemed like forever,” he said. “They literally had to reattach my muscle, so you start from Ground 1 building back up, building, building, building to get it to (where) it’s at a point, like I said, now I feel like I’m ready.”
Bryant’s contract was restructured after the injury. He was paid $1.25 million instead of $6 million last year and is due $3 million non-guaranteed this season with a chance to recoup the $4 million reduction from the original $7 million salary in incentives.
Bryant wasn’t around the team much last season. He missed the game, and his teammates, and was thrilled to line up with them again.
“Man, it’s an amazing feeling,” he said. “I was away from this game I feel like for too long, but that is part of the game. You get injured and it’s about how you respond and get back. I have been fortunate enough to get into a position where I am back out there with my dogs.”
Hue Jackson coached Bryant (6-foot-6, 310 pounds) in 2011 with the Raiders and called him one of the “missing links” for the Browns during last year’s franchise-worst 1-15 season. Bryant signed with the Browns as a free agent in 2013 and has started all 41 games he’s played, totaling 14.5 sacks, 127 tackles, a forced fumble and a fumble recovery. He has 25 sacks in his seven-year career.
“Desmond is one of my favorites,” Jackson said last week. “He is a veteran player, knows how to play, extremely tough, extremely bright and loves football.
“When I think of him and the rest of our front seven and potentially what it could be, that is exciting. That is exciting because if he can go back and be the player that he was, it is going to give us a huge boost.”
Bryant became a starter for the first time during Jackson’s season with the Raiders after beginning on the scout team.
“There were definitely a few times he had to stop things and (say), ‘Can somebody block this guy?’” he said. “So I really appreciated that. I just always had a special connection with Hue.”
Bryant expects to line up mostly at tackle in new coordinator Gregg Williams’ 4-3 scheme but also bounce outside in certain situations.
The Browns have made significant changes to the defensive line since Bryant last played a down, drafting Emmanuel Ogbah and Carl Nassib last year and Myles Garrett, Larry Ogunjobi and Caleb Brantley this year. A likely starting front four features Danny Shelton and Bryant inside, with Garrett and Ogbah as the ends.
“There is a tremendous amount of potential for our defensive line,” Bryant said. “But there is definitely going to be a learning curve. We are going to have to figure things out and figure out how to kind of work together to get the mission accomplished.”
Bryant is the elder statesman of the group and welcomes the leadership role.
“It’s huge to me,” he said. “I realize the value in that, and I’m here to help make my team better. If I can take some of those guys under my wing and kind of coach them up, teach them a few things that I see differently than what they might be seeing right now, we will be a better team and that’s great for us.”
After the long, hard journey, Bryant can finally see the finish line.
“I feel great. My body feels great,” he said. “One of the unforeseen benefits of not playing last season is I got a chance to kind of heal up the rest of my body, as well.
“I really do feel great. I am looking forward to the rest of this offseason, preseason and we will get going.”
A HUE MOVE
Jackson is a new client of Jay Z’s Roc Nation Sports, as the deal became official Wednesday, a source confirmed to The Chronicle-Telegram.
Jackson continues to be represented by agent John Thornton, who joined Roc Nation. Jackson’s the first coach under Roc Nation’s umbrella.
The agency also represents Golden State Warriors forward Kevin Durant, Jacksonville Jaguars running back Leonard Fournette and Seattle Mariners second baseman Robinson Cano, among others.
Contact Scott Petrak at 329-7253 or [email protected] Like him on Facebook and follow him @scottpetrak on Twitter.