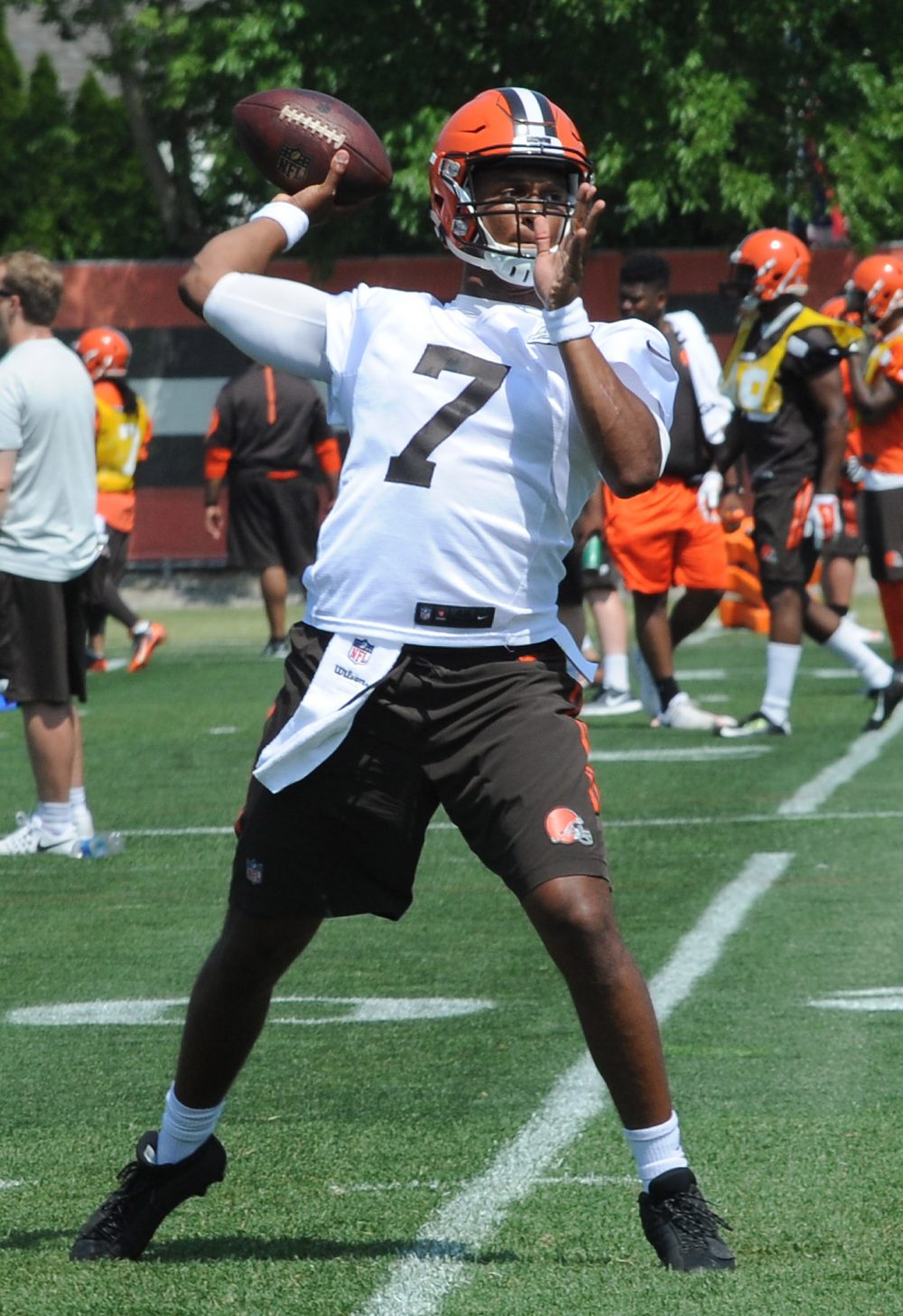 BEREA — Quarterbacks coach David Lee gets excited when rookie DeShone Kizer drives the first-team offense during practice. And when his strong arm connects on a deep throw. And when he gets outside the pocket and gains yards.
“It’s big-play ability. That’s what that dude’s going to give this football team if he ever becomes the starter one day,” Lee said Thursday at the conclusion of minicamp.
The Browns drafted Kizer (6-foot-4, 233 pounds) out of Notre Dame with the No. 52 pick because they hoped he’d give them a chance to match up inside the AFC North with Pittsburgh’s Ben Roethlisberger and Baltimore’s Joe Flacco.
“A big, strong guy, which is defined in this division by Ben and by Joe Flacco, and this kid’s in that mold,” Lee said. “He’s 6-4 3/4, he’s got a 10-inch hand, he’s smart, he can run, he can move.
“He’s got a great future. He’s just a long way from being ready. He’s not ready, but he’s climbing on it and he’s making progress.”
Kizer was the third quarterback in the rotation Thursday behind Cody Kessler and Brock Osweiler but continued to work with the first team. He led a touchdown drive in a two-minute drill, hitting tight end Randall Telfer over the middle, then receiver Rashard Higgins down the seam. On first-and-goal, Kizer rolled right and threw to Higgins for the score.
Despite the highlights and improvement, Lee isn’t getting ahead of himself.
“When I look out there and I see him miss a protection call and he gets hit upside the head, I know he’s not ready,” he said. “That doesn’t happen all the time, but when it does, you can’t put him out there and endanger the team as well as get him killed.”
Kizer said Wednesday he’s talked to quarterbacks who started right away as rookies and they made an impression.
“A lot of them wish they did have some time,” he said. “The more time the better and there’s only so many days up until game one this year.”
Lee said he thinks “all the time” about the harm that could come from playing Kizer too soon.
“How many really great, young talents had to start Day One, bad things happened and they’re sitting in the meeting room looking up at the roof, ‘What’s going on in my life here?’” Lee said. “You would love to not put him in there ’til he’s ready, but we don’t know when that is right now. We don’t know who the starter is right now. And he’s competing, too, ’cause he moves the football. He moves it out here against a great defense.”
Lee said Kizer has come a long way in the ability to call coach Hue Jackson’s complicated plays in the huddle. They’re still trying to shorten his long stride when he throws.
“It just came with him, and that really affected his accuracy,” Lee said. “He’s all over it and then he’s awry. He’s all over it and he misses again. And that has been the No. 1 thing. Because when he gets a base and he shortens his stride and he steps and throws it, it’s a thing of beauty.
“He’s got an extremely strong arm and if we can get his fundamentals and his lower body good, you don’t touch his release. He’s got the most beautiful release and whip in his arm, and he’s got to learn the offense. His head’s swimming but when he gets it, and he gets the lower body, he’s got a chance to be special.”
Jackson and Lee are also trying to fix Osweiler’s lower-body mechanics. He, too, is a long strider.
“It’s been a lot of work and it’s still not there yet,” Lee said. “Brock knows that when we start moving around and the bullets start flying, his legs get long again like daddy longlegs and that’s when he gets in trouble and the ball sails.”
Lee isn’t down on Osweiler, whose future and role with the team still seem uncertain after he was an afterthought in a March trade.
“You can say what you want, but the guy in the last two years has taken two different teams to the playoffs, and there’s nobody else in that room that can say that,” Lee said. “He looks like a guy who’s played before. He’s great at the line of scrimmage. He’s great in the huddle, I mean calming effect. Is he the quarterback? We don’t have one yet, but he’s in the mix for sure.”
Lee likes to focus on mechanics and had plenty to fix when he was hired in the offseason. Kessler had lots of issues as a rookie last season.
“He had a long stride, locked his knee and he looked like a boomerang when he’d release the ball,” Lee said. “He’s gotten more upright ’cause he’s gotten a base. He’s shortened his stride. He’s got a bend in his knee. He’s gotten more velocity and distance on the ball.
“He was always accurate. He was accurate coming out of (USC). But he wasn’t really that deadly accurate past 15 yards. I think he’s gotten better in that area. He knows the offense by far the best. He knows all of Hue’s stuff.”
So with minicamp over and training camp only six weeks away, no one has emerged as a clear favorite to win the starting job and face the Steelers in Week 1.
“We’re competing, but as far as coming along and trying to line them up, we’re a long way from that,” Lee said. “You’ve got to put people in the stands in pressure situations, then we can rate them one, two, three, four a whole lot easier.”
Contact Scott Petrak at 329-7253 or [email protected] Like him on Facebook and follow him @scottpetrak on Twitter.