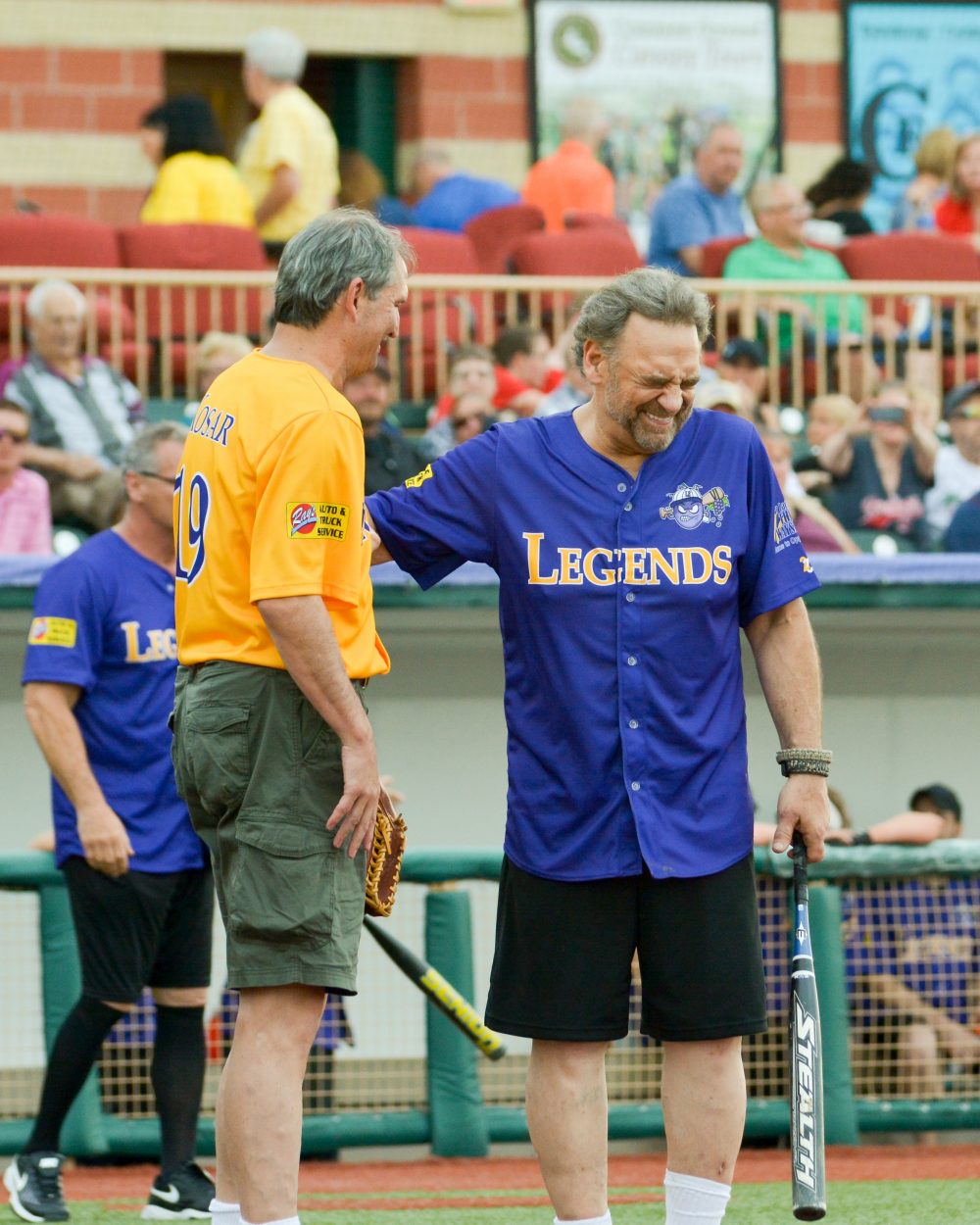 AVON — Some of Cleveland’s biggest football and baseball stars of the past three decades got together Saturday night at Sprenger Stadium to the delight of more than 1,000 fans in attendance to play softball and raise money for Our Lady of the Wayside during the Lake Erie Crushers’ first Cleveland Sports Legends Game.
Former Cleveland Browns Bernie Kosar, Bob Golic and Josh Cribbs were joined by ex-Indians Carlos Baerga, Len Barker, Travis Hafner and Joe Charboneau and a number of local dignitaries and media members, including Elyria Catholic grad and Super Bowl champion Matt Wilhelm, for a seven-inning softball game that was followed by an autograph session and fireworks display.
Charboneau, the 1980 American League Rookie of the Year who also spent a year on the Crushers coaching staff, had 25 friends and family members, including his six grandchildren, in the stands to help celebrate his 62nd birthday.
“It’s great to be back here, I know some of the fans here. It’s a great way to spend my birthday,” he said.
Although Charboneau no longer has the skills that earned him the nickname “Super Joe,” he still wanted to put on a good show for the fans.
“Your mindset goes fast and you want to win, but your body goes in slow speed,” Charboneau said. “Nowadays I’m slow moving, when I get out there I feel like my body was dipped in novocaine and I’m wearing cement shoes.”
Charboneau was in left field for the Indians when Barker threw his perfect game in 1981 and they are on the Notre Dame College coaching staff, but on Saturday they were on opposing teams. Charboneau batted cleanup for the Purple team, while Barker pitched for the Yellow team.
Purple walked away with a 12-11 win thanks to Wilhelm’s two-run inside-the-park home run in the bottom of the seventh.
Barker was happy to be able to reconnect with the Cleveland fans and support a good cause.
“It’s an honor to be asked to come out here for Our Lady of the Wayside, they do such great things in the community,” he said. “And to come out with the fans and be around them, they’re a big part from when we played professionally and all that. Cleveland fans are great fans and we enjoy doing things like this for them.”
Kosar, who is still a fan favorite more than two decades after putting on a Browns uniform for the last time, singled in his first at-bat after stepping into the batter’s box with “Bernie, Bernie” blasting from the speakers.
“Doing events in the community and coupling that with being in my 50s and trying to stay athletic and get exercise, this is a great double combination,” Kosar said. “It’s really humbling and amazing to meet so many kids that truthfully weren’t even alive when I played. They were just a thought. And to see it, it’s humbling and it’s nice to be around the kids.”
Golic, a radio talk show host in Akron, enjoys the back-and-forth with the fans.
“Even during football games I’d turn around and face the stands at away games and say, ‘Who’re you yelling at?’ It’s fun to interact with people,” he said. “Each year it gets nice to know that there’s still people that remember.
“I hope they don’t take it personally that we don’t run very fast anymore. Now running and doing athletic stuff isn’t as much fun, but this part, interacting with the fans, is great. It’s all downhill from here, though.”
Baerga, who played on the Purple team with his son Carlos Jr., said he was happy to get the chance to help out a good cause. However, he said once he steps between the white lines the competitive juices start to flow again.
“Let me tell you something. We are going to have fun, but when you’re an athlete, no matter where you are you want to win,” he said.
Former Crushers infielder Andrew Davis had six RBIs for the Yellow team.
Contact Todd Shapiro at 329-7135 or [email protected]