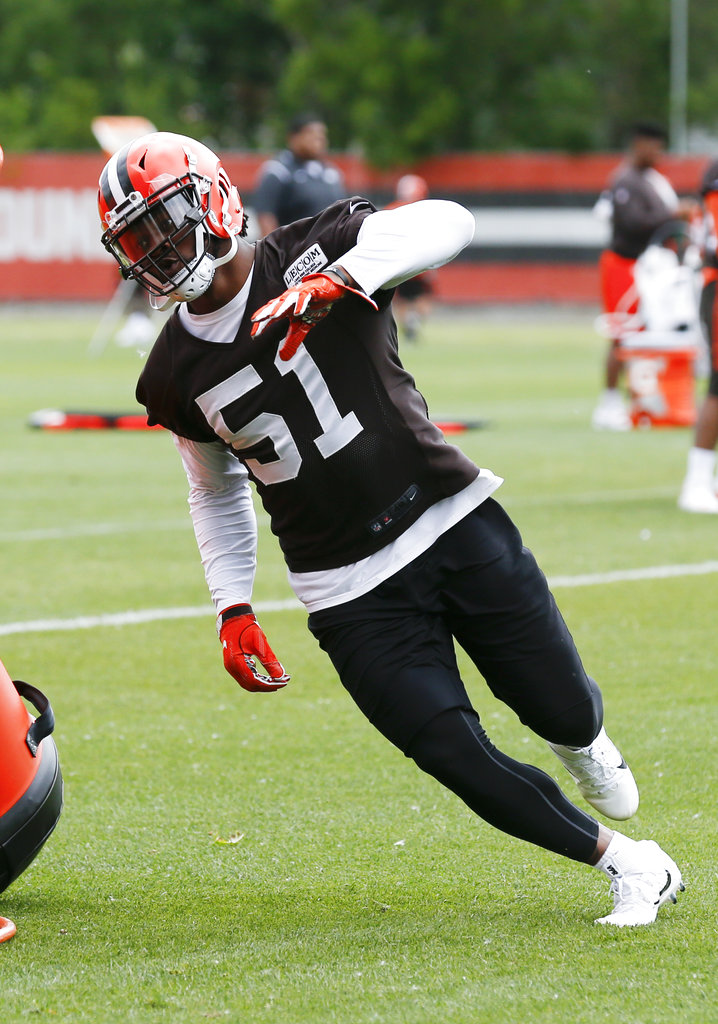 The first-team linebackers had been dismissed, but Jamie Collins wasn’t done. As linebackers coach Blake Williams taught the backups how he wanted to defend certain routes near the end zone, Collins enthusiastically went over the intricacies of the coverages with fellow starter Christian Kirksey.
The minutes-long tutorial during minicamp revealed something not always attributed to Collins.
“I don’t want to give out all of Jamie’s secrets, but Jamie is a smart football player,” Williams said last week.
Collins’ rare athletic gifts were obvious last year after the Browns traded a third-round compensatory draft pick to the New England Patriots at midseason. The Browns saw enough and signed Collins to a four-year, $50 million contract after the season to keep him from becoming a free agent.
With plenty of time for him to settle in, the Browns expect to see the full package from Collins this season. That includes sharing his wisdom with teammates.
“We all know where he came from. He has been very well-coached in New England,” Williams said, referring to Bill Belichick and his staff. “That is great for us coaches to be able to coach off of that coaching.
“He is a smart football player. Sometimes being a smart football player is having great instincts, too. You see him. He knows a lot more than people would think. He sees plays coming before they come, sees things get set up and is getting a good give-and-take with all of those linebackers in there and imparting some of that knowledge on them.”
Collins, 27, is polite but brief with reporters and arrived with the reputation of being quiet. Defensive coordinator Gregg Williams, Blake’s dad, said that isn’t always accurate.
“I can’t shut him up now,” Gregg Williams said. “He loves the banter of competition. Everybody in the building is shocked about that.”
Collins (6-foot-3, 250 pounds) played nearly every snap in his eight games with the Browns, which included the season’s lone win. He had two sacks, a forced fumble and 69 tackles. He had two interceptions, a sack, a forced fumble, three passes defensed and 43 tackles in seven games with the Patriots.
The Browns hope he’ll duplicate or exceed his performance of 2015, when he had 89 tackles in 12 games with 5.5 sacks, an interception, six passes defensed, five forced fumbles and a fumble recovery on the way to the Pro Bowl.
“He can make game-changing, dynamic plays,” coach Hue Jackson said near the end of last season. “
Versatility is one of Collins’ strengths. He can play on the line or in space, and although he’ll be the strongside linebacker on the depth chart, Gregg Williams will use him in a plethora of roles.
“You all don’t get the chance to see how really good he is at a lot of things,” Gregg Williams said. “He is very intelligent. He was a high school quarterback and really would have liked to play quarterback in college. He’s begging me to play free safety, and I’m not saying he couldn’t be the best one out there right now.
“If he wants to play defensive end, he could play defensive end. There are a lot of things about his versatility that it’s going to be fun and challenging to find spots to cut him loose and let him go.”
Collins needs to be a playmaker on a defense that ranked 31st last year. But he, Kirksey, cornerback Joe Haden and ends Myles Garrett — the No. 1 pick — and Emmanuel Ogbah provide a foundation and hope for the future.
“He can do a lot of things and so it’s kind of fun for us, but it’s on us to kind of move him around to be able to let him do those things,” Blake Williams said of Collins. “To let him capitalize on that and hopefully maybe keep offenses off on where he’s going to be.”
Minicamp ended with a couple of fun contests. After four defensive backs, four receivers, four running backs and a couple of linebackers had failed to hit the target with a throw from 20 yards, Collins grabbed the ball and ended the competition.
He makes a lot of things on a football field look easy.
“He kind of always impresses his teammates doing that,” Blake Williams said. “We always talk as coaches, talent evaluators and all of that stuff, we look for guys who can ‘just do.’ There are some people who can just do, and he can just do.
“It is great to have guys like that around and he is a great competitor as well. You do not always get that all the time where the guy that has great natural talent, but maybe he is lacking a little bit on the competitive side of things. He hates to lose. He is a competitive guy, and he has been a joy to coach this offseason.”
Contact Scott Petrak at 329-7253 or [email protected] Like him on Facebook and follow him @scottpetrak on Twitter.