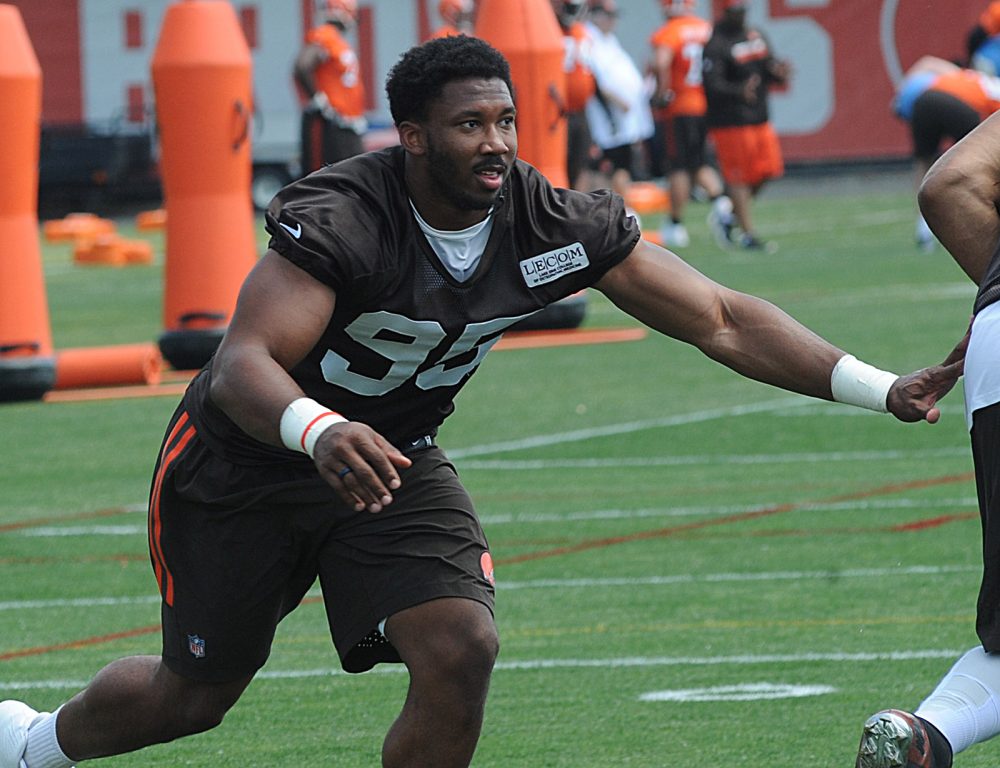 The latest look at Myles Garrett is much more encouraging than the previous two.
And it should have Browns fans optimistic with training camp less than three weeks away.
Garrett, a defensive end who was the No. 1 overall draft pick in April, replied Friday to a fan asking about his injured left foot on Twitter by posting a video of him doing four reps on the leg press. Not only are there several heavy plates of weights on each side, a man is seated atop the press.
“Ya know… it’s doing alright..” Garrett wrote with the video.

Garrett crumpled to the ground and grabbed the foot after rushing the quarterback during minicamp last month. He didn’t practice again and was then spotted in a walking boot at the airport as he left town for the break before training camp, with rookies required to report July 23.
The Browns announced he was diagnosed with a lateral foot sprain after getting a second opinion from foot and ankle specialist Dr. Robert Anderson. The team said he was expected to be ready for training camp.
Garrett (6-foot-4½, 272 pounds) will likely be limited at the start of camp as the Browns proceed with caution. But the weightlifting display seems to show the foot is healing nicely.
The Browns are counting on Garrett to improve a defense that ranked 31st overall last year and tied for 30th with 26 sacks. He was a three-time All-Southeastern Conference selection and two-time All-American at Texas A&M. He totaled 145 tackles, 48.5 tackles for loss, 32.5 sacks and seven forced fumbles.
“A guy who’s just ready to play,” fellow rookie defensive lineman Larry Ogunjobi said. “You just see a guy who knows what he wants to do and how he wants to do it. He’s a guy you can learn a lot from.”
** Pro Bowl left tackle Joe Thomas will appear on "Family Feud" tonight at 8 on Channel 5. He will be joined by other NFL stars.
Contact Scott Petrak at 329-7253 or [email protected] Like him on Facebook and follow him @scottpetrak on Twitter.