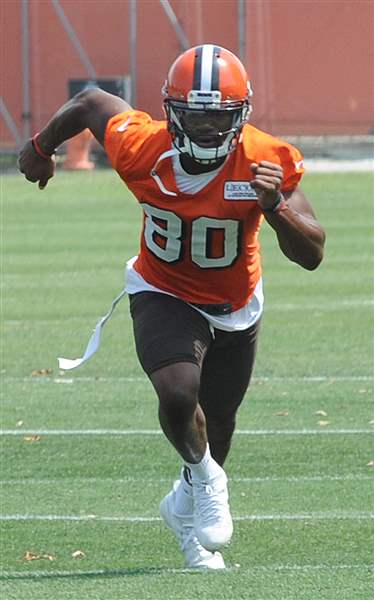 Receiver Ricardo Louis didn’t change numbers after an underwhelming rookie season, he figured out some things and got a lot more comfortable.

“It’s a different guy,” Saunders, who’s been coaching since 1970, said at the conclusion of minicamp last month. “You look at Ricardo now and he’s playing with so much more confidence. He’s catching the ball really well, he’s running fast.”

Louis arrived in Cleveland with good size (6-foot-2, 215 pounds) and speed (4.43-second 40 time) and a chiseled body. But the improvement in performance from Year 1 was obvious during the offseason program.

“I’m coming off the ball a lot faster,” he said. “I’m able to use my speed and scare the DBs. My route-running is just a lot more advanced than it was last year as far as changing directions, coming out of breaks and creating separation.”

The Browns need Louis to continue to progress in order to help a receiving corps that could be the weakest position group on a suspect roster.

No. 1 wideout Corey Coleman was the No. 15 pick but is coming off a disappointing rookie season and missed much of the offseason with injuries. No. 2 Kenny Britt was signed as a free agent for $32.5 million but must prove he can at least replace Terrelle Pryor’s production.

And those are just the beginning of the questions at receiver with training camp set to open Thursday.

“That whole group has got to take another jump because we are young at that position,” coach Hue Jackson said. “We all know that and respect that and understand it. We have to see if those guys can make the jump.”

Louis isn’t conceding anything to Coleman and Britt on the depth chart and was glad to take their repetitions when they missed time in the offseason.

“I’m taking advantage of it,” Louis said. “I’m taking it and running with it, learning it and expanding my role.

“It’s a big question who’s going to be No. 1 and No. 2. We’re all competing to get on the field and play. Nobody has a legit spot right now.”

Louis was a fourth-round pick out of Auburn, the second of four wideouts drafted in 2016, behind Coleman and ahead of Rashard Higgins and Jordan Payton. Louis had minimal impact, starting three of 16 games with 18 catches for 205 yards, an 11.4 average and no touchdowns.

Saunders said the challenge for many rookie receivers, especially one who didn’t make the transition from quarterback until he was at Auburn, is grasping mentally everything that’s thrown at them. That includes learning the playbook, reading coverages and mastering routes, and if they’re not comfortable in any area, their play slows and their effectiveness drops.

“Just a lot more confident in what I have,” Louis said. “Command of the offense, I know the offense a lot more now than I did last year. Once I hear the play, I know what I can do and I can play even faster because the DB doesn’t know what I’m doing, so it’s like they can’t stop me.”

“There’s not a guy in that room that prepares any more diligently off the field at home than Ricardo,” Saunders said. “He is magnificent in his note-taking, his transcribing, the way he studies at night. He’s really helped himself understanding what he has to do and now he lines up at the line of scrimmage when he hears the play and sees the defense and recognizes the coverage, he goes a hundred miles an hour and he is a talented young man.

“So I’m thrilled that he feels really comfortable in what he’s doing and really excited about when we get into the preseason and see if he can take that transition and get into real physical football and play the game when things are not what you expect it to be. He’s been terrific.”

Pryor has gone to Washington but said watch for Louis this year.

“It definitely makes me feel good coming from him, because he’s one of those guys that I look to as a veteran and I watched him and how he prepared for games, and how he practiced and everything he did leading up to the season,” Louis said. “I took a lot of things from him and I learned a lot. Just keeping my head down and working.”