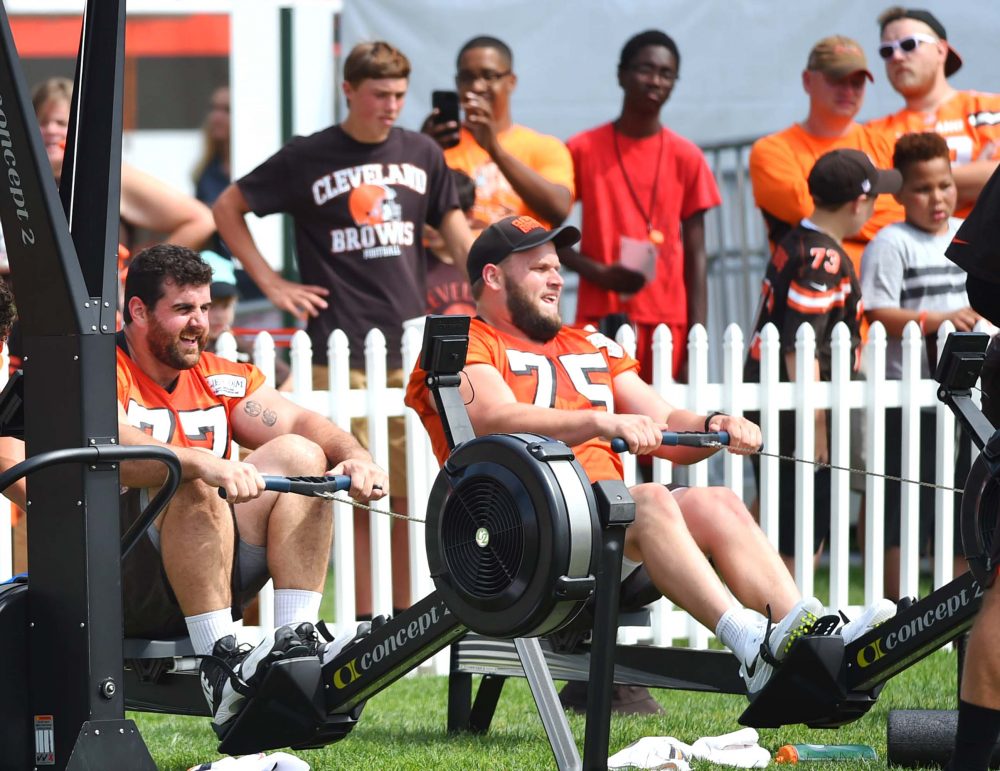 It signified so much more than a single snap.

“It was unbelievable,” Bitonio told The Chronicle-Telegram on Friday. “I think you take for granted sometimes being in the NFL and playing football for a living, and to kind of come out there and just … all the work we put in to get back to where I was … I mean, it’s a serious injury and to get back on the field first day of fall camp, that was the goal from the start.

“Obviously be ready to play Week 1, but I want to get the reps and it was really cool and kind of put things in perspective for me. Now I’m just ready to go and turn it up a notch.”

Bitonio had Lisfranc surgery on his right foot Oct. 16. A Lisfranc injury involves the bones and ligaments at the top of the foot.

Bitonio, a second-round pick in 2014, said he didn’t have any setbacks during the nine-month rehab process, but that doesn’t mean it wasn’t difficult. On top of the pain, frustration, monotony and losing a big chunk of his offseason free time, he couldn’t drive for 12 weeks as he was on a scooter then in a walking boot.

His wife, Courtney, or one of his teammates had to take him to and from Browns headquarters for nearly three months.

“Without your car for 12 weeks is tough,” Bitonio said. “I felt like a little kid again, Mom dropping me off at practice every day. Which was my wife, and she was a beast about it.”

When Bitonio finally got out of the boot and was able to walk, jog and drive, he felt like the recovery would be a success. The belief was confirmed when he hit the blocking sled.

“I’m like, all right, that felt normal,” he said. “That was probably the major turning point, where I’m like, ‘Man, I’ll be able to move some big boys out there again.’”

Bitonio had to be careful not to gain too much weight when he was immobile. He was able to do some cardio in the boot, and used the time to work “super hard” on his upper body.

“I put on some good muscle,” he said. “Benching, pullups, as much as I could do without getting too crazy.”

Bob Wylie is Bitonio’s fourth line coach in four seasons. He didn’t see Bitonio in team drills until Thursday but was sold much earlier.

“He’s a true professional,” Wylie told reporters Sunday. “He’s got the passion and the heart. He has that, and he worked himself into coming back and doing that.

“So Joel Bitonio is a guy I would go into the foxhole with. I would take him to war. I can trust him.”

Bitonio wasn’t sure what a foxhole is but had the general idea and appreciated the compliment.

“I guess if we’re in a back alley I’ve got his back. That’s what it means, right?” he said. “I think he just saw that we were putting in the work.”

Bitonio wants to take every repetition to prepare for the season but understands why the coaches and medical staff are being cautious and limiting him in the early stages of camp. He got the day off Sunday but was a part of the first group that ran the ball down the throats of the defense Saturday in the first tackling portion of camp.

“We want to run the ball. That is part of our (identity),” he said. “We have some big guys up front. We brought some new guys in.

Bitonio has Pro Bowl talent but wasn’t able to stay healthy the last two years and establish himself as one of the best in the league. After playing every snap as a rookie, he missed six games in 2015 with an ankle injury and 11 games last year with the foot.

No wonder he’s so excited to be back and healthy.

“I felt like I was just back to normal, so that is a plus,” he said. “It was good to get out there and run around with the guys and play football actually. When you are not in pads, you can do as many drills as you want, but actually hitting someone and running, tackling and hitting someone, it is as close as you are going to get to playing a game. It was really good to be out there, and I had a really good time. It was fun to practice.”

Owner Jimmy Haslam reiterates he has right people in place, promises patience, points to 2018 and ’19 for “substantial” improvement
Myles Garrett doesn’t stop when practice ends, wants to be ready for grind of the season