QB Brock Osweiler named starter for preseason opener, but Hue Jackson says competition “not over by any stretch” 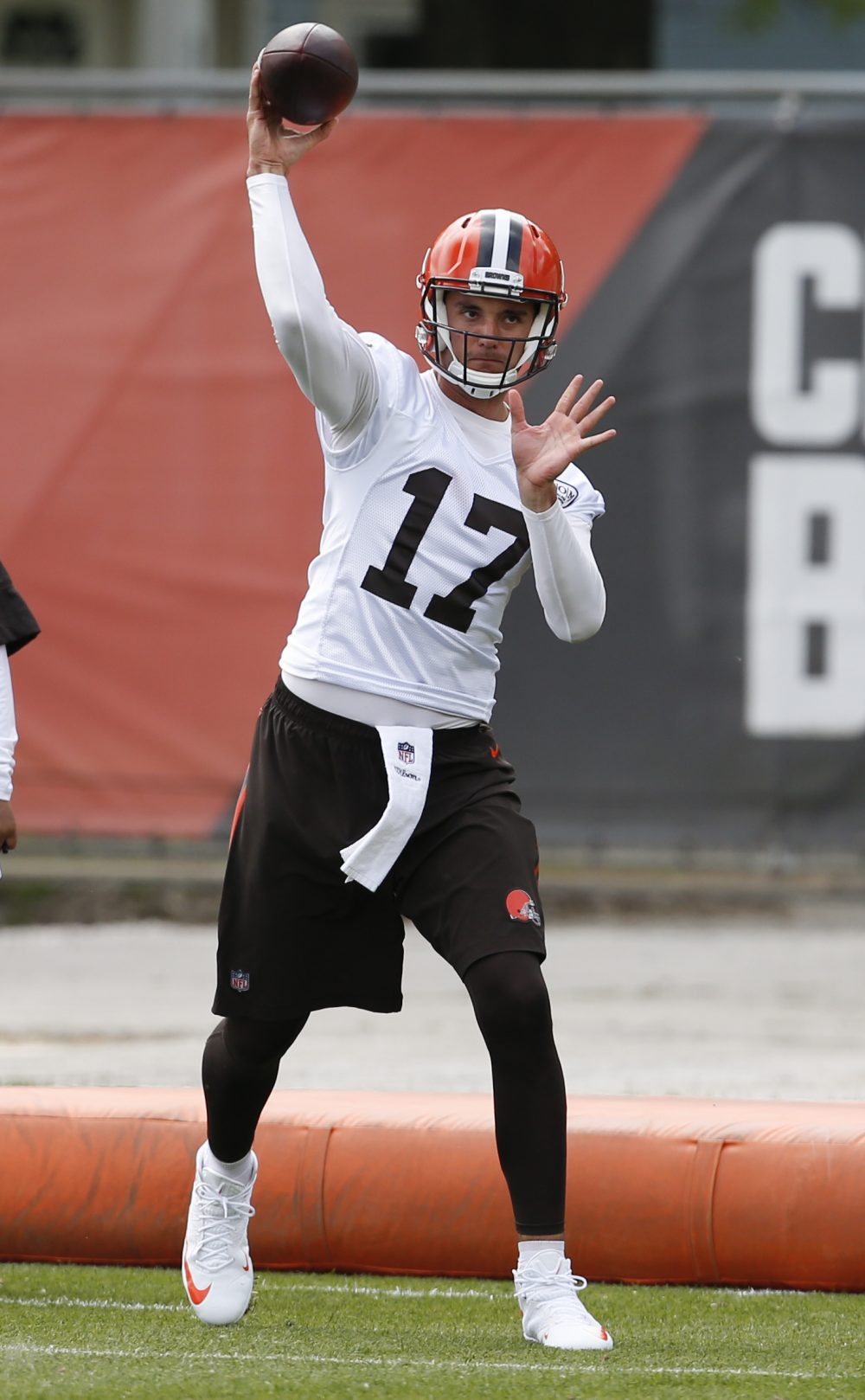 BEREA — Brock Osweiler wasn’t supposed to be with the Browns this long. And the plan certainly wasn’t for him to be atop the depth chart heading into the preseason.
But that’s exactly where he is after coach Hue Jackson announced Monday morning he’ll be the starting quarterback Thursday night in the preseason opener against the New Orleans Saints at FirstEnergy Stadium.
Osweiler (6-foot-8, 240 pounds) was an afterthought in a March trade from Houston, with the Browns willing to take on his $16 million guaranteed salary for 2017 in return for a second-round draft pick in 2018. He was expected to be traded or cut but has beat the odds.
“No gratification,” he said. “This is just one step, but there’s a lot of work to be done. There’s a lot of chemistry to be built.”

There’s no guarantee Osweiler will be the starter when the regular season opens Sept. 10 against Pittsburgh, as Jackson reiterated the decision was for this week only. The order against the Saints will be Osweiler, displaced No. 1 Cody Kessler, rookie DeShone Kizer and possibly Kevin Hogan.
“This thing is not over by any stretch,” Jackson said of the competition.
Kizer was the other option to open against the Saints, but Jackson is giving him more time to get ready following an inconsistent effort against the backup defense Friday night in the Orange and Brown Scrimmage.
“This is just another step in the process of me trying to get better,” Kizer said. “This whole training camp is about me developing and going out and performing when my number’s called.”
Jackson was complimentary of the “heady” Osweiler.
“Obviously, Brock knows how to play,” Jackson said. “He’s very conscientious, he works extremely hard. He’s gained a lot of respect in the locker room.”
But the decision wasn’t just about Osweiler. Jackson wants to give Kizer and Kessler more playing time, and the starter usually plays less than the backups in the first preseason game.
“So when you sit down and think about what’s best for our football team, it’s best for me to trot Brock out there, see if he can go lead this offense and lead the team and in the process keep getting these young guys more reps,” Jackson said.
Osweiler, 26, has been the best of the quarterbacks through a week-plus of practices. He led a pair of field-goal drives Friday and completed several deep passes Monday as he continues to learn the intricacies of Jackson’s system, the third he’s been in the last three seasons. Osweiler had worked exclusively with the second team, so he immediately began spending time with starting receivers Corey Coleman and Kenny Britt and running back Duke Johnson to get on the same page.
“Nothing replaces reps, and especially game reps,” Osweiler said. “So just the fact I can get out there with that first group and start building some chemistry will be a positive.”
He didn’t want to spend much time reflecting on the trade from Houston that caught him off-guard. He had signed a four-year, $72 million contract as a free agent the previous offseason but was benched toward the end of the regular season and clashed with coach Bill O’Brien.
He joined the Browns with a 13-8 record as a starter — 5-2 with Denver in 2015 for an injured Peyton Manning and 8-6 with the Texans. For his career, he’s completed 59.9 percent with 5,083 yards, 26 touchdowns, 22 interceptions and a 77.4 rating.
“When I got traded, I focused on the things I could control — my attitude, my energy, my effort toward my offseason workouts and cleaning up things I maybe didn’t do so well the previous season,” Osweiler said. “I had a conversation with Coach Jackson very early on and he said, ‘You’re a Brown.’ I came in here with a positive mindset. I was very excited to be here and really just tried to make the most of my spring and put a good foot forward.”
The Browns haven’t ruled out trading Osweiler if they receive the right offer, and the platform as the starter could be a showcase. But he’s focused on the task at hand.
“This league gives you opportunities,” he said. “Sometimes you don’t know when they’re going to come. Sometimes you do know when they’re going to come. The key is making the most out of that opportunity, and if you do, the rest will take care of itself.
“There was a coach that once said, ‘If you’re not getting better, you’re getting replaced,’ and that’s really how I believe this league works.”
Kessler regressed and was replaced. He had worked exclusively with the starters but couldn’t seize the opportunity, holding the ball too long and throwing underneath too often.
He said he’ll continue to prepare as a starter and keep fighting to be the man Week 1.
“It’s always a competition,” he said. “You’ve got to continue to keep playing well and doing things the right way if you want to give yourself a chance.”
Kizer called it “very vital” for someone to step up and run with the starting job.
“There needs to be a pecking order in order for the leadership to happen the way it needs to,” he said. “Brock was named that guy, and this week he’s already out there running things the way he needs to run them as a true (No.) 1 quarterback, and if that guy does happen to change to a new guy, then that guy needs to step in that week and treat it as if it’s his team.”