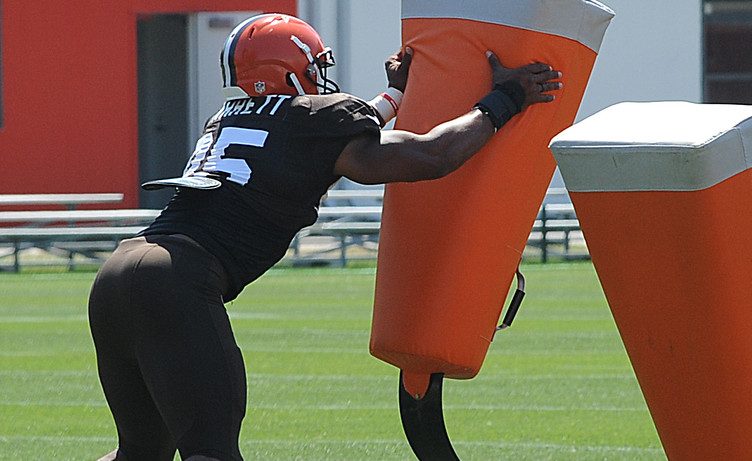 BEREA — Of course, No. 1 pick Myles Garrett wants a sack in his NFL preseason debut.

That won’t be nearly enough to satisfy him.

“I want to display a most dominance when I’m on the field,” he said Tuesday. “So I’m trying to have a dominant performance, whether it’s preseason first series or whenever I get out there.”

The Browns open the preseason Thursday night against the New Orleans Saints at FirstEnergy Stadium. Garrett will try to set a tone for the season, and his career.

“They don’t have much film to go off of, at least not of me now, and they don’t know what I have to offer, so I’m looking forward to sending a message through this first game,” he said.

The defensive end from Texas A&M has been outstanding through the last week-plus of camp. Inspired by a visit from Hall of Famer Bruce Smith and going against 10-time Pro Bowl left tackle Joe Thomas, Garrett has been nearly impossible to block, including two sacks in the intrasquad scrimmage Friday and two others that could’ve been called.

He hasn’t been allowed to hit a quarterback — he couldn’t help but knock down Cody Kessler because he was going so fast when he beat Thomas last week — but that will change against the Saints.

“It’s kind of a relief,” Garrett said. “It’s really harder to avoid hitting him than it is to actually wrap him up and take him down. Now that I can follow through, I can actually show that I’m getting there and I’m making big plays.”

“Definitely an athletic specimen,” Peppers said. “He takes his job very, very seriously and he makes it a lot easier on us and a lot of the other guys up front.

“I’m just curious to see how he does when he doesn’t have to worry about not hitting the quarterback. So that should definitely be fun.”

“You’ve spent most of your life looking up to those guys and watching them play, watching them make big plays, not only in the regular season but in the playoffs and Super Bowls,” Garrett said. “But now, idolizing them is over. It’s time to show that you’re in their class and you can play with the big boys.”

After starting camp with the second team at the direction of coordinator Gregg Williams, Garrett was listed as the starting right end on the first depth chart.

“It’s an honor,” he said. “Gregg said he was going to make me earn it, and I’m just trying to show that in this preseason and all throughout the season that I’ve earned it and that I’m here to stay.”

Thomas said Garrett had the “total package” and the talent to be an elite pass rusher. In their private meetings, he focuses on trying to help Garrett improve.

“Usually, he’s just trying to give me tips, footwork, how I can decrease the amount of signs I’m giving to tip them off to what I’m going to do next,” Garrett said. “He’s been here for 11 years now and he’s still doing it at a high level. So he knows what he’s talking about.”

Thomas wants Garrett to expand his focus, giving him more to think about as he lines up across from the tackle.

“You’re trying to narrow in, but there’s certain things you have to pay attention to during those six seconds during the play,” Garrett said.

He’s expanded his array of pass-rush moves since the draft and said he’s having fun despite the grind of camp. He was appreciative of the visit from Smith, the all-time sack leader with 200.

“It showed that he really cared about trying to mold me into a great player,” Garrett said. “After every play coming to me with one thing or another, just trying to improve my game.

“Hopefully I can pattern myself a little bit after him, take a couple of things that he’s done and just pick a few things from guys who are playing now, because the game’s adapted from when he’s played, and mold myself into something great as well.”