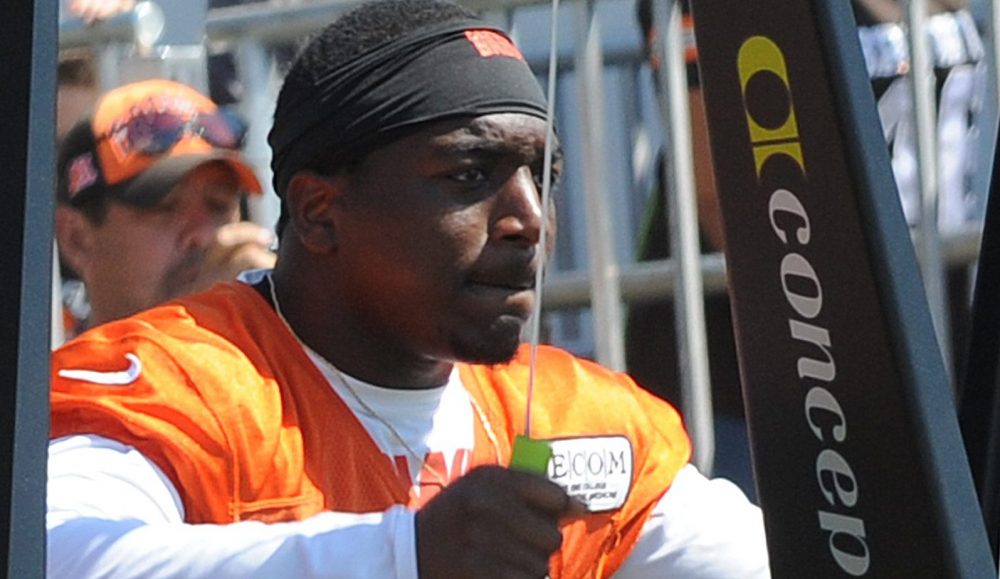 BEREA — Duke Johnson lined up in the slot Tuesday and caught back-to-back passes from Brock Osweiler on an out and a hook. During the scrimmage Friday he got wide open at the goal line on a seam route.

Get used to it. Johnson remains the No. 2 running back behind Isaiah Crowell but could have a giant impact this season as a receiver.

“I’ve been fortunate in my career to have guys like Duke Johnson that have not only great running skills, but also skills as a receiver and skills as a player-in-space guy,” said veteran receivers coach Al Saunders, who compared Johnson to Marshall Faulk, Lionel James and Dante Hall. “The thing that that allows you to do, they’re like the queen on the chess board. They can move to every spot. They can do everything and they give you an advantage when it comes to personnel matchups.”

Coach Hue Jackson will try to create mismatches through Johnson’s versatility. If he’s in the huddle and the defense treats him as a running back by keeping an extra linebacker on the field, he can line up in the slot as a receiver. If the defense goes with an extra defensive back, Johnson (5-foot-9, 210 pounds) can carry the ball up the middle.

“We ask a lot of Duke,” Jackson said. “He is a terrific football player. He is very valuable to what we do.”

He’s expected to be used in the slot or split wide even more this season, so those numbers should rise. He could become the first Browns player with 50 catches in three straight seasons since receiver Kevin Johnson in 1990-92, and the first NFL running back with 500 receiving yards in his first three seasons since Herschel Walker in 1986-88.

“He catches the ball as well as any receiver that we have and he has a gifted talent as a pass catcher,” Saunders said.

The opportunity for Johnson at wideout is in part because he’s good at it, and in part because the Browns have a need at the position. After starters Corey Coleman and Kenny Britt, receiver remains a giant question mark, so Johnson could see significant time as the No. 3.

Running routes from the line of scrimmage is different than out of the backfield. Johnson usually spends part of practice with the wideouts and said he’s been trained like that since high school.

“That’s something I enjoy is being in the slot, because it’s something different for me,” he said. “It’s something that I normally don’t do a lot of and when I get a chance to do it, I just go out there and have fun with it.”

Plenty of backs show good hands on swing passes and checkdowns, but the routes are longer as a receiver, which requires the ability to track the ball while running downfield.

“The most difficult thing for a running back is to catch the ball going away from the quarterback where he has to judge the ball in the air and Duke has a natural feel for that,” Saunders said. “So we’d like to accentuate that and give him the opportunity to use those skills.”

Johnson blamed himself for not being “mentally ready.” He said he didn’t do enough film study of the defense and committed to changing that this season.

“My thing is if I can see something happen before it happens, I can always be ahead of the defense, and last year I caught myself a lot of times behind the defense and didn’t make plays,” he said.

In his expanded role, Johnson didn’t have an ideal number for his touches this season.