Notes: Myles Garrett disappointed with “nothing” in his debut, which includes QB hit, tackle for loss 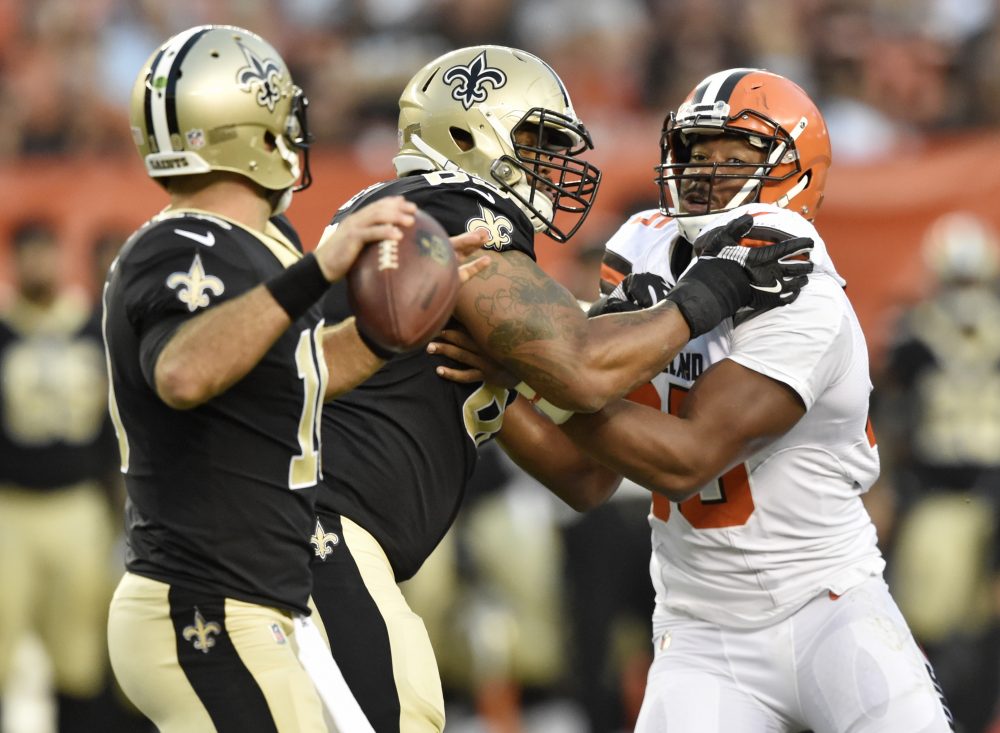 CLEVELAND — No. 1 pick Myles Garrett didn’t dominate as he hoped Thursday night but succeeded in sending the rest of the teams in the league a message in his preseason debut.

They shouldn’t sleep on him.

Garrett played three series with the starters and registered a quarterback hit, a tackle for a 2-yard loss, was in on a tackle for no gain and was active throughout, including chasing a run 22 yards downfield and to the left sideline.

Garrett was asked what he didn’t like about his performance.

“Nothing,” he said after the 20-14 win over the Saints. “I played my game. I got to where I wanted to go, hustled hard and made the plays I’m supposed to make.”

The hit came on third-stringer Garrett Grayson on Garrett’s final snap of the night and forced a punt. Garrett, who spent nearly every snap at right end, showed off an impressive first step, getting a great jump off the line and blowing past veteran backup left tackle Khalif Barnes.

“He held his own,” coach Hue Jackson said. “When he had an opportunity to rush, he rushed well.”

The Saints seemed offended by Garrett’s comments from Tuesday in which he said he wanted to have a “dominant performance” and was “looking forward to sending a message.”

ESPN’s Dianna Russini tweeted before the game a Saints player said he was looking forward to the “christening of the first pick in the 2017 draft!”

“That’s what my dad told me, but I feel like that’s every team, they want to introduce the rookies or especially the guys who are drafted high into the league and show them what it’s all about,” Garrett said. “It’s still just football, play our game.”

He said the Saints didn’t do much trash talking and he didn’t notice anything special.

“No, a couple double teams but nothing out of the ordinary,” he said.

Cameron Erving started at left tackle in place of Joe Thomas, who was given the night off, and the drop-off was as startling as predictable.

Erving, who’s competing for the starting right tackle job with Shon Coleman, was called for a false start and a hold on consecutive plays on Cleveland’s first drive, although the hold was declined after an incompletion. On the fourth and final series for the first-team offense, Erving pulled on a run but whiffed on the block, and Isaiah Crowell was dropped for a 4-yard loss.

Erving, the No. 19 pick in 2015, flopped at guard as a rookie and was disappointing at center last year. If the doesn’t win the starting job, he could be traded or cut.

Coleman’s night wasn’t clean, as he was called for holding on a run.

** Rookie Jabrill Peppers, the No. 25 pick, was the starting kickoff and punt returner. He let one punt go over his head for a touchback, fair caught another with room to run — he was upset when he realized — and returned one for 13 yards. He returned a kickoff 27 yards.

“I feel like I should have broke both of those, just got to stay on my feet, just finish what I start,” he said. “I take pride in setting a lot of high expectations for myself and when I fall short of those, I don’t feel like I accomplished what I needed to. First game, got my feet wet, first one’s under the mat, just going to keep getting better from here.”

Starting safety Ibraheim Campbell sustained a concussion on the second play from scrimmage.

He lay on the ground for minutes following a running play, as the cart was called and the stretcher put next to him. But he suddenly sat up and was able to walk off the field on his own.

He went to the locker room and was diagnosed with a concussion.

** Rookie tight end David Njoku, the No. 29 pick, didn’t dress as he continues to deal with a sore back.

A constellation of stars didn’t play.

** Linebacker Craig Robertson led the Saints with 131 tackles last year. He signed as a free agent after spending four years with the Browns.

** Kicker Patrick Murray, who opened last season with the Browns before suffering a knee injury before the third game, was signed by the Saints 10 days into camp and will battle Wil Lutz for the job.

** The meeting was only the third between the teams in the preseason, the first since 1982.