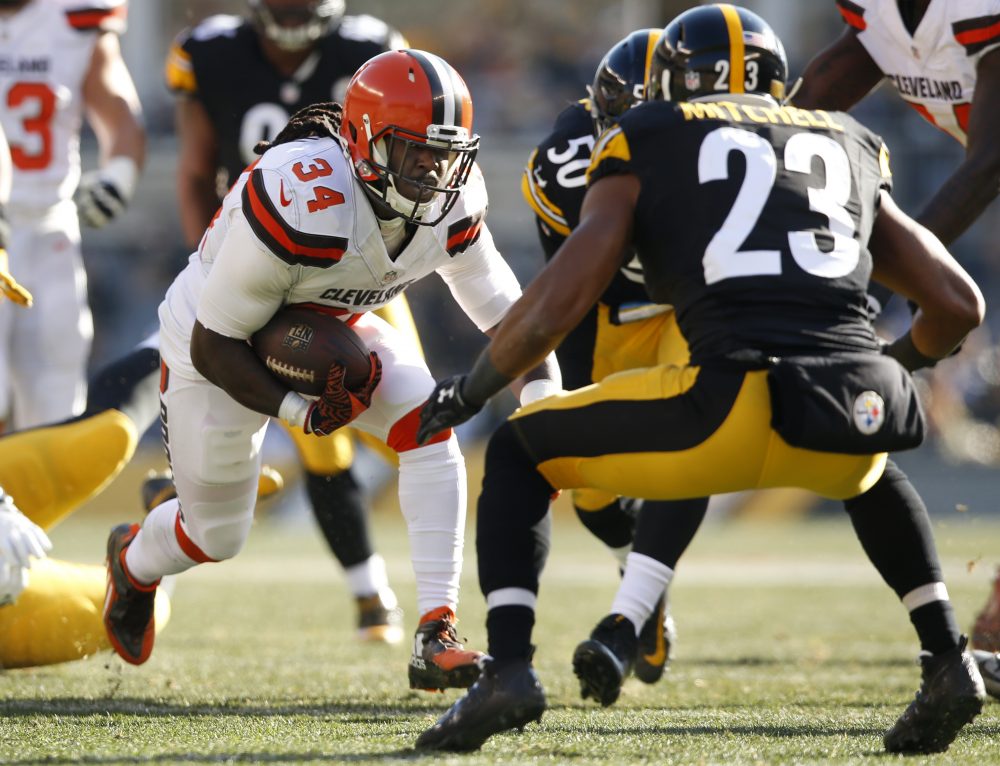 Browns running back Isaiah Crowell named them on his list of best running backs in the NFL.

“Yeah, I put myself up there at the top and I feel like I can get out there and just get the job done in any way,” he said Saturday.

Crowell has never been considered for a Pro Bowl and hasn’t been among the league’s statistical leaders. He didn’t sound cocky when he said it, just answered a question about where he ranks among the game’s best.

But it’s clear he feels overlooked around the league.

“Yeah, I feel like it’s time for that to change and that’s why I’m just trying to go out here and prove myself, just each and every play when I’m out there on the field, so that won’t be the case,” he said.

Johnson, Bell and Freeman are dual threats as 1,000-yard rushers and dangerous receivers. Johnson ranked first in the league with 373 touches and Bell fourth with 336.

“I like all of those guys’ games,” Crowell said. “To be one of the best, I feel like you’ve got to be able to do it all.”

Crowell had his best year in 2016 with 952 yards, a 4.8 average and seven touchdowns on the ground, adding 40 catches for 319 yards. He ranked 15th in the NFL in rushing yardage and had the lowest number of carries among the leaders. The 238 touches were well behind his peers and he wants more opportunities running and catching.

With No. 2 running back Duke Johnson spending more time as the slot receiver, Crowell should get them. Coach Hue Jackson has promised to commit to the run game with Crowell as the workhorse, and he expects to stay on the field more often on third down.

Crowell isn’t as natural a catcher as Johnson is, but believes he’s underrated.

“I work hard all the time, each year in catching the ball out of the backfield,” Crowell said. “I feel like now I’m getting more of an opportunity to do so.

“It’s the more you can do. I feel like I can catch the ball out of the backfield, I can pass protect, I feel I can run the ball. I feel like I’ve just got the combination of all three.”

The confident talk comes at a critical time in Crowell’s career. He’s eligible to become an unrestricted free agent after the season if recently hired agent Drew Rosenhaus can’t get a long-term deal done with the Browns. The sides have talked during camp.

Crowell didn’t get a signing bonus as an undrafted rookie in 2014 and is playing this season under the $2.75 million restricted free agent tag. Without a long-term deal in place, he’s betting on himself to have a monster season.

“So that’s the main thing I can do is just work hard and just really try to help my team get some wins.”

Freeman set the running back market Wednesday, agreeing to a five-year, $41.25 million extension with the Falcons that makes him the highest-paid running back at $8.25 million a year. He rushed for 1,079 yards and 11 touchdowns last year and added 54 catches for 462 yards as the Falcons reached the Super Bowl.

Bell doesn’t have a long-term deal, hasn’t signed the $12.1 million franchise tag for this season and hasn’t reported to Steelers camp.

“I mean, you’re going to think about it,” he said. “I feel like it’s great for him. I feel like he’s a great player and he deserves it.

“I feel like it’s just a great deal for all the running backs who are out here right now that deserve to get paid.”

Center JC Tretter was signed in the offseason and has developed an appreciation for the man he’s blocking for.

“He runs hard, which is nice,” Tretter said. “A guy who’s not afraid to kind of run through the smoke, just hit a hole hard, and if you give him a little crevice of space, he’s going to take advantage of it.”

Crowell said he’s trying not to worry about the contract situation.

“I just feel like God controls everything, so I’m just trying to just be patient, I know my time is coming,” he said. “I’m just being patient and just stay working and keep working hard and just trying to be the best I can be.”

Hue Jackson doesn’t want to make “knee-jerk reaction” in “raising” of QB DeShone Kizer
Notes: Nate Orchard off to strong start as he tries to bounce back from lost season