Notes: Nate Orchard off to strong start as he tries to bounce back from lost season 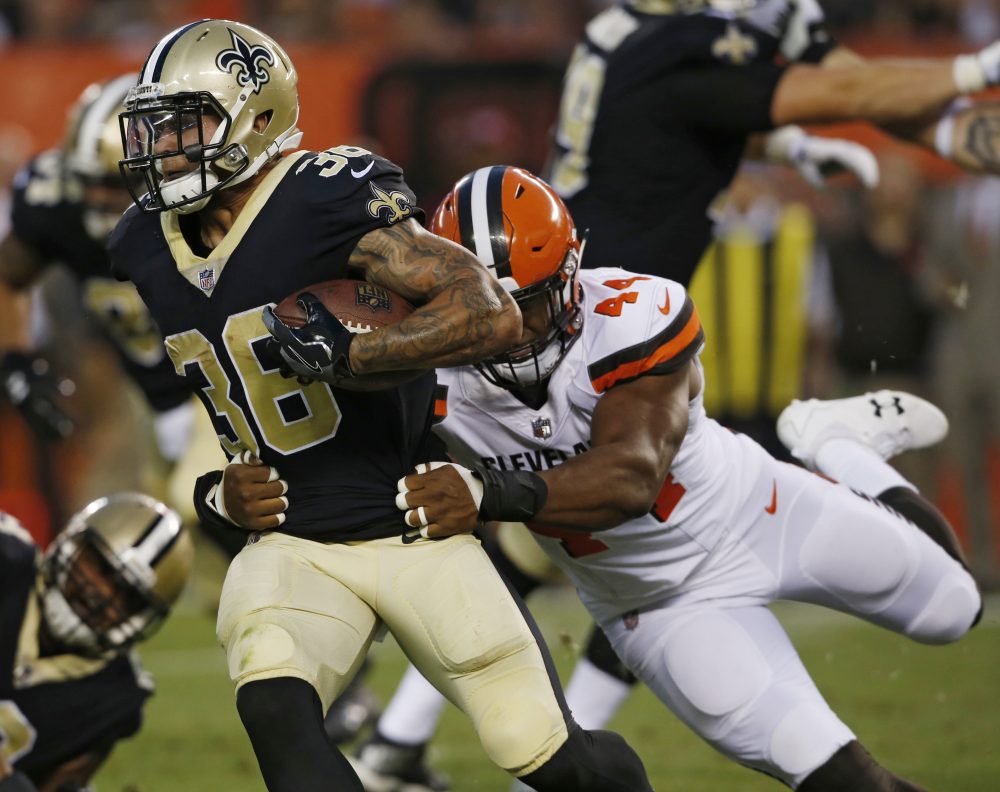 BEREA — Defensive end Nate Orchard had plenty of time to think about, and prepare for, this season. He played only three games last year before being placed on season-ending injured reserve Oct. 1, then was recovered from the sprained ankle by early November.

“My mindset and my focus ever since my injury is I visualize myself coming back and being successful,” he said Saturday. “I’m going to continue to do that. I’m going to just constantly work on my craft.”

Orchard was a second-round pick (No. 51 overall) out of Utah in 2015 but has failed to live up to the draft status. He had three sacks in 15 games as a rookie and none last year.


He doesn’t appear a lock to make the final roster but got off to a strong start in the preseason opener Thursday with two tackles, a half-sack and plenty of time in the backfield.

“It just felt good to go out there and start rushing the passer,” said Orchard, who’s back at end after two years at outside linebacker in a 3-4 system. “I just need to continue to build off that.”

He missed the opener as a rookie with a back injury but said he never missed a game in little league, high school or college. So last year wasn’t easy.

“To miss time like that definitely hurt, but it was a learning experience as well,” he said. “It’s the game of football. You’re always one injury away from a season-ending, a career-ending injury, so I definitely took a step back, looked at my life, analyzed everything, where I wanted to be, who I wanted to be and how I’m going to bounce back from this injury.”

No. 1 pick Myles Garrett is usually worth watching, and was again Saturday.

The defensive end sacked Kevin Hogan, dipping his shoulder low to the ground to get past rookie Rod Johnson, and took down Cody Kessler after lining up wide and beating Cameron Erving to the edge. Garrett didn’t have the same success going against 10-time Pro Bowl left tackle Joe Thomas.

Garrett was stopped by Thomas on his first attempt, with the help of traffic from two tight ends, then jumped offside on the next snap. Thomas had some fun at Garrett’s expense by blocking air, and coordinator Gregg Williams replaced him for one play. When Garrett returned, Thomas stoned him again.

“He’s the most gifted person I’ve ever met on and off the field and so I’m just grateful to have him on the team,” Orchard said of Garrett.

Payton played in a game for the first time since Oct. 30, when he made the only catch of his rookie season for 3 yards. He was a healthy inactive for four games, then suspended by the league for four games for violating the policy on performance-enhancing drugs.

“In those situations, you don’t know what’s going to happen until it happens and I’m thankful that I’m still here and I’m thankful that they stood behind me,” Payton said of the organization. “It says a lot about them. I’ve always been a loyal person in my life. If someone defended me or stood with me through anything, I’ll give my life to them, so that’s where I’m at right now, I just try to do everything I can for this organization, for Hue (Jackson), for Sashi (Brown), for all the people upstairs and obviously for those guys in the locker room.”

Payton was a fifth-round pick out of UCLA and is fighting for a roster spot. The winner was his lone catch Thursday.

Shon Coleman has the edge on Erving in the battle for the right tackle job, and center JC Tretter thinks Coleman can have an impact in the ground game.

“Physically, you see a lot of plays where he’s so powerful,” Tretter said. “When he can harness that, he can get a guy moving and open up holes in the run game. I just think the more reps he gets, the more experience he gets, the better.”

Coleman was a third-round pick out of Auburn last year and saw limited action.

Safety Ibraheim Campbell (concussion) and defensive end Cam Johnson (knee) were among those who didn’t practice.

** Cornerback Briean Boddy-Calhoun didn’t quit on the play, chasing down receiver Rashard Higgins after a deep completion to poke away the ball for a fumble.

** As Garrett dressed after the game, Stevie Wonder’s “I Just Called to Say I Love You” played in his locker.