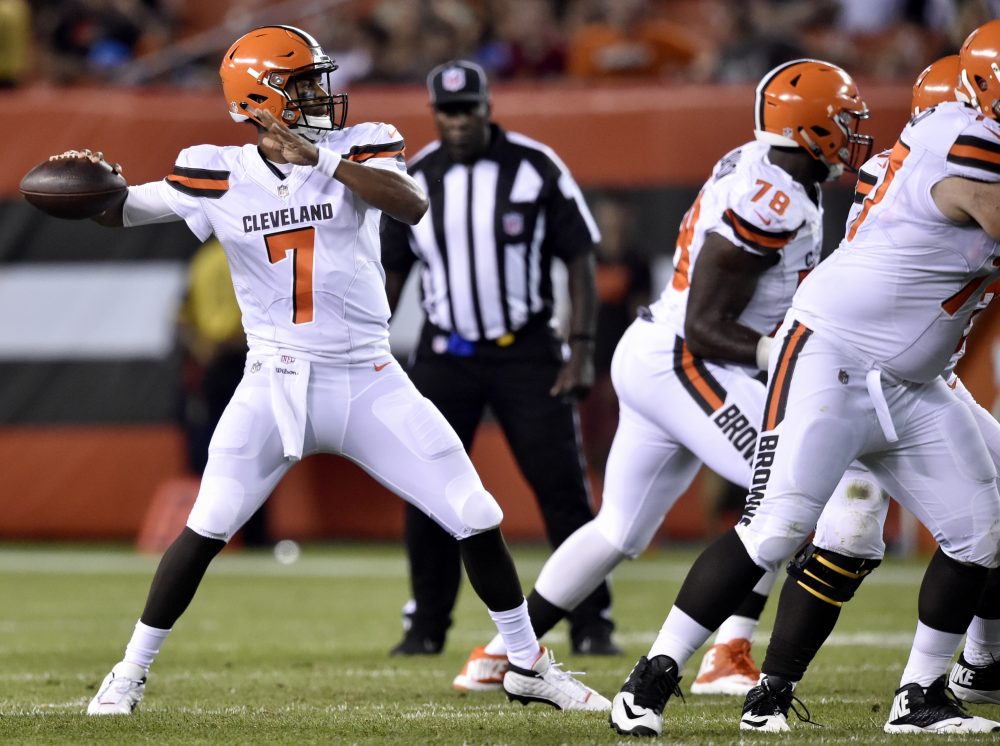 BEREA — Ready or not?
The Browns will have a much better idea Aug. 22.
Quarterbacks coach David Lee thinks the timing is perfect for Jon Gruden and the rest of the “Monday Night Football” crew to visit Aug. 21 for the preseason game against the Giants. Rookie DeShone Kizer will be thrust into the spotlight as the coaching staff evaluates whether he should be the Week 1 starter Sept. 10 against the Pittsburgh Steelers.
“He’s a lot better than he was in the spring, but he’s still not there,” Lee said Sunday before practice. “He knows it. That’s why this one Monday night is so good for him. That’s what we need.
“Put him in real lights, a national-television game, and see if he can carry these fundamentals that we’re harping on him over and over and over to the game. He’s trying and he’s doing better. Has he got it mastered? Not yet. So we’ve got to know he can do all of it before we put him out there full time. So he’s not ready for that yet.”

Coach Hue Jackson said he won’t announce who’s starting the second preseason game until “somewhere around” Wednesday or Thursday. He could stick with Brock Osweiler, or turn to Kizer, who led a fourth-quarterback comeback against backups in the opener vs. the Saints on Thursday.
The drumbeat for Kizer to be promoted grew louder after a winning 45-yard touchdown pass to Jordan Payton on fourth-and-2 with 1:52 left.
“DeShone had an unbelievable performance, just like I thought he would,” receiver Corey Coleman said.
But Jackson and Lee seem determined to proceed with caution until convinced Kizer can handle the starting job and not give it back.
He still has time to persuade them.
“We’ve got for sure two more games. You get three under your belt, you’ve got a pretty good feeling about what your quarterback can do and can’t do,” Lee said. “Coach is going to decide when he wants to decide. But I’m looking forward to watching his progression in all these areas we’re talking about in these next two games, and we’ll see where he is then.”
Lee isn’t worried about Kizer’s confidence cracking if he’s promoted and has a setback.
“DeShone has enough confidence for the whole team,” he said.
Lee said Jackson hasn’t held anything back as they try to get Kizer ready.
“He’s giving it all to him and we’ve been very demanding on him,” Lee said. “This kid’s bright. Let me tell you, he’s smart. All those quarterbacks who came out (in the draft), we loved his brains and test scores.”
Kizer, the No. 52 pick out of Notre Dame, showed the big-play ability Lee’s been talking about for months against the Saints. He added 52-, 22- and 18-yard completions, and combined the strong arm with smooth feet inside and outside the pocket.
“That’s how natural his instincts are and how good he is and can be,” Lee said.
Kizer has made steady progress but still has growing pains. He struggled to get the play called properly against the Saints and has periods of inaccuracy.
Lee said Kizer did a good job overcoming adversity when the headset in his helmet wasn’t working against the Saints. But getting the play called remains a work in progress.
“As the team changes, the game plan changes, there’s a new set of memorization that’s got to take place, and it’s hard,” Lee said. “I promise you it’s not easy what he’s doing. He’s doing a heckuva job. Is he there yet? Not really.”
Kizer completed 11 of 18 passes (61.1 percent) against the Saints for 184 yards, a touchdown and 114.1 rating. His accuracy was much better than in the Orange and Brown Scrimmage a week earlier, but he’s had bouts of wildness throughout training camp.
On Saturday he badly overthrew Rashard Higgins over the middle and J.D. Harmon was waiting for the interception. Lee attributes the overthrows to reverting to bad footwork.
At 6-foot-4, Kizer tends to overstride, and Lee has instituted drills to help him and the 6-7 Osweiler shorten the step with the left leg.
“They both have the same disease,” Lee said. “I know what kind of results you can get if you can shorten your stride. You’re going to be more accurate, not throw those balls that go in the lights.”
Osweiler had that problem against the Saints, airmailing receiver Ricardo Louis and tight end Seth DeValve on deep balls.
“We’re not muscle memory yet. His lower body’s not muscle memory,” Lee said. “It’s so hard because when the bullets start flying, old habits will take over.”
Osweiler can be forgotten with all the Kizer hype, but there’s a good chance he could be the Week 1 starter. Lee said he did a “lot of really good things” in four scoreless possessions against the Saints and pointed to near-misses with DeValve and receiver Kenny Britt that would’ve meant 14 points.
“He studies so hard. I can’t tell you how hard he prepares,” Lee said. “And he’s excellent at the line of scrimmage. He is so clear. He is great.”

Notes: Corey Coleman says he’s working to be the No. 1 WR Hue Jackson demands
Kicker Cody Parkey was “taken aback” by drafting of Zane Gonzalez, determined to keep his job