Kicker Cody Parkey was “taken aback” by drafting of Zane Gonzalez, determined to keep his job 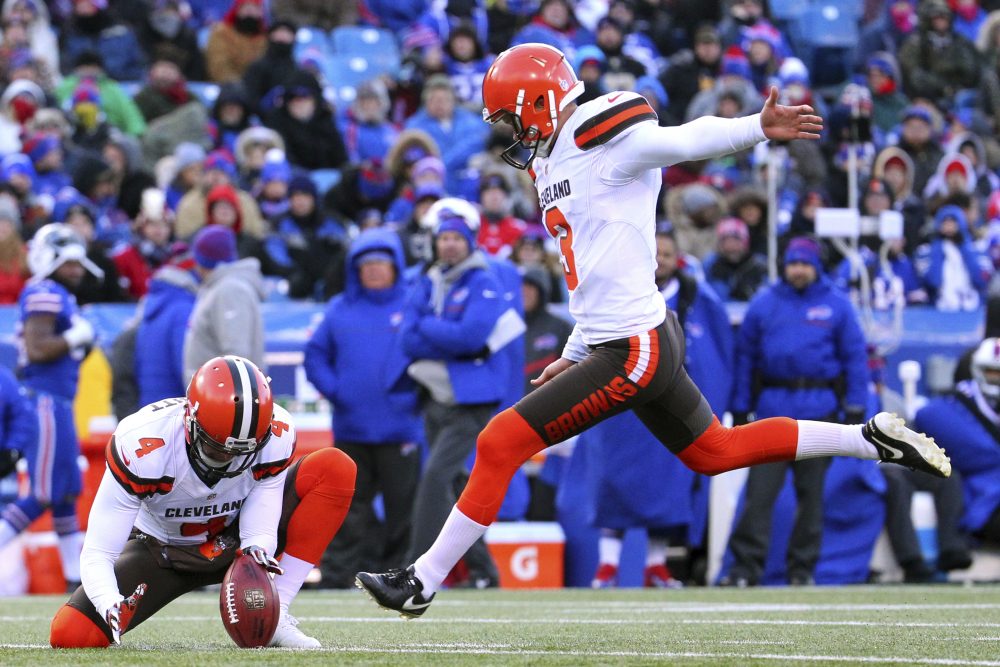 “I was kind of taken aback,” Parkey said Monday. “But I was reassured that it was going to be open competition.

“And it just kind of makes me want to work harder, just to prove people wrong about me.”

Parkey, the incumbent, and Gonzalez remain engaged in one of the tightest battles of training camp. Parkey has a small edge in the end-of-practice kicking contests, but the four preseason games will likely determine who makes the team. Gonzalez was 2-for-2 on 33-yard extra points Thursday in the opener against the Saints, while Parkey didn’t get a chance.

“There is a little movement. I think it is kind of close,” coach Hue Jackson said Sunday after practice. “I am not going to say which way it is, but at the same time, they are still working through it.”

Gonzalez said he thinks the competition is close but the coaches keep their leaderboard “under wraps.”

“We have both been kicking phenomenally,” he said. “It is really hard to say if anybody has the edge right now.”

Jackson called special teams coordinator Chris Tabor “a master” and credited him for creating an environment that puts the kickers under pressure.

“It is not just out here,” Jackson said. “It is in the classroom. It is understanding where to put the ball, how to put the ball in certain places. There is a lot that goes into it, more so than just kicking at the end of practice.”

Parkey, in his fourth year in the league, has the edge in experience, but anytime a team spends a draft pick on a specialist — the Browns hadn’t drafted a kicker since Dan Plocki in 1989 — it’s invested in the newcomer.

“I’ve had success in this league,” Parkey said. “I’ve had my ups and downs, like anyone else, but just to go out there and show the team that I can do it and hope that I’m going out there and showing the coaches what I’m capable of doing.

“Zane is an awesome guy, but at the end of the day this is my job I want to win and I’m just going to go out there every day and try to compete.”

Parkey went 20-for-25 on field goals last year and 20-for-21 on extra points. The numbers aren’t bad, but look a lot better if the Dolphins game in Week 3 is excluded.

Parkey signed at the end of the week after Patrick Murray was injured in practice. He had limited time to develop timing with long snapper Charley Hughlett and holder Britton Colquitt and went 3-for-6 on field goals in an overtime loss in Miami. He missed wide left from 41 yards, hit the left upright from 42 and missed wide left from 46 yards to win the game at the end of regulation.

“They gave me another game after the first game, which was honestly awesome,” he said. “They believed in me. I didn’t have a good first game. There is no way to sugarcoat that, but I think the definition of a good kicker is how you respond because you are going to miss a kick here and there, and I think I responded the next game by going 2-for-2 and just showing them that I can do this.”

The Dolphins debacle was Parkey’s first game since the Eagles placed him on injured reserve with a groin injury in Week 4 of 2015. He had made the Pro Bowl with the Eagles as a rookie in 2014 but lost a camp battle last season.

“I feel stronger than ever and better than ever and I’m just ready to get things rolling,” he said. “I put a lot of work in this offseason to be where I’m at right now and I definitely feel a whole lot better this year than I did last year, that’s for sure.”

Parkey has a big leg, but so does Gonzalez, who kicked a 59-yard field as a senior at Arizona State and tied an FBS record with three from 50-plus yards in a game. He’s the FBS all-time leader with 96 field goals and 494 points.

Does he have a favorite kick?

“All of them,” Gonzalez said. “When you make it it’s relief. Every time I make a kick it’s a really great feeling. Just don’t remember any of the misses.”

As a senior he won the Lou Groza Award as the nation’s top kicker. He reports to work every day at 76 Lou Groza Blvd., named for the Browns Hall of Famer.

“It’s a pretty special feeling,” he said. “I didn’t really realize it was that big a deal until I got here the first time and I saw Lou Groza right on the front door. It’s just awesome to look back and know that I did win that award and now I’m here.”