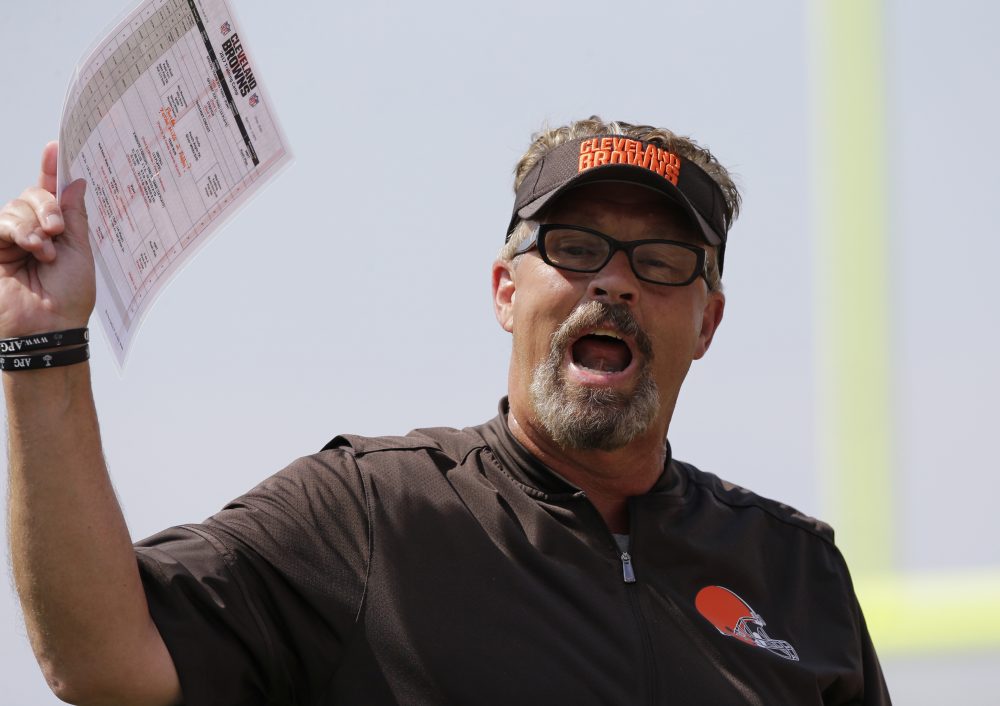 BEREA — Defensive coordinator Gregg Williams is never satisfied. So when it was suggested his unit has dominated the offense throughout training camp, he wasn’t having it.

“They are having some solid days, but we can be a lot better than we have been,” he said Tuesday.

Williams hasn’t softened, especially during practice, when he strains his voice with screams before, during and after every snap. He would fill a swear jar in a two-hour session and ended Monday’s practice by demanding the defense do up-downs because it gave up a touchdown on fourth-and-15 in a two-minute drill.

“Oh, my gosh, what he is doing on defense is what you need,” coach Hue Jackson said.

But Williams took a step back from the pushing and prodding Tuesday before practice and handed out a few compliments.

“They have been solid, and they have been very good in the practice setting,” he said. “Our guys played solid the other day in the game, but there were a lot of guys who didn’t play for the Saints. Solid is one thing, but we have a lot of places to get better.

“I am very proud with the staff on how they have adapted to the intensity of how I want us to be, and the players have done a very good job with that. They have said, ‘How do you want me to do it?’ That is pretty pleasing.”

The Browns beat the Saints 20-14 in the preseason opener Thursday. New Orleans played without quarterback Drew Brees and running backs Adrian Peterson and Mark Ingram — all Pro Bowlers — and the Cleveland defense held it to 3-for-13 on third down and 0-for-2 on fourth down. The Browns forced and recovered two fumbles and had five sacks.

Williams is starting to get a feel for just how good the defense can be but won’t know for sure until the regular season starts Sept. 10 against the Steelers.

“Now that you have the pads on, it is another indication, but we are still a long ways off on playing real people,” he said. “To be quite honest, we have come a long way, and I am feeling more comfortable about what these guys can and can’t do, so you will start to see us shrink the game plan a little bit and start focusing in.”

He said he still needs to do research on what certain players can and can’t do in his system. He’s already got a good read on rookie defensive end Myles Garrett, the No. 1 pick.

“I have never had a chance to draft the first overall pick ever, but I have had some pretty high draft picks. He is the one that has jumped out and fit in faster than any of the other ones, and I have had some really, really good ones,” Williams said.

Garrett started at the bottom of the depth chart, like all rookies under Williams. He stayed humble, climbed up the ranks and earned the endorsement of the veterans.

“He has done well,” Williams said. “He played the run very well last week. He was very disruptive on the things that we ask him to do in the pass game. I can tell you this, you go back and watch the film, they were pointing to where he was. The Saints knew where he was.”

Williams touched on a number of other topics:

** The importance of facing quality competition in practice and the preseason.

** Cornerback Joe Haden in his return from offseason surgery on both groin muscles.

“He has had a very good camp. He has had a very, very solid camp, a physical camp,” Williams said. “Even (Monday), some of the more physical plays in his total career were (Monday) on how physically he played. I have been very pleased with him. Now, it is about being available. He has to stay healthy.”

** On screaming “get off” to his linemen before every snap in practice to stress aggression at the point of attack.

“How fast you are getting off the ball has a direct reflection to the production you will make on that play. Myles already naturally does it. The rest of them are starting to do a better job.”

** On five offside penalties against the Saints.

“Now, you would not want to print nor record what I said about (that),” Williams said. “All of them alignment. None of them jumping off the ball. We have had a little bit of a discussion about that and a few focus experiments on that this week. You can’t have a pre-snap nor a post-snap at the end of a play.”

** The competition to be the starting middle linebacker between Tank Carder and Joe Schobert.

“Both of them have been doing great,” Williams said. “Truthfully, it is 3A, 3B. They are doing very, very good, and you can’t have enough good guys like that.”